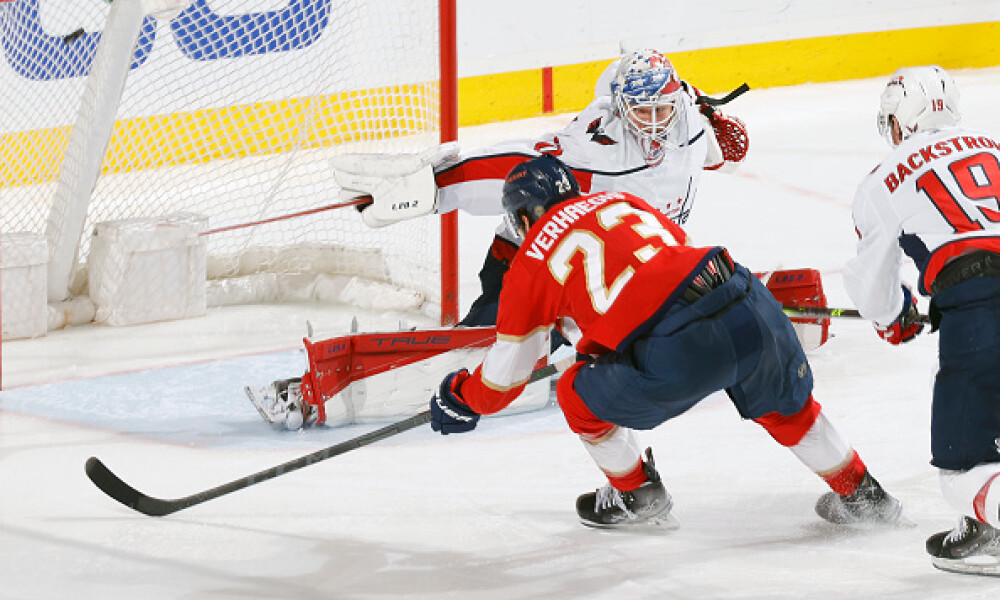 We have three elimination games on today’s Stanley Cup Playoffs edition of the NHL DFS slate on DraftKings, FanDuel, and Yahoo. Before building those daily fantasy hockey lineups, let's take a closer look at tonight's NHL playoffs matchups. Oddly the road teams all own the highest expected goal totals with the Florida Panthers, New York Rangers, and Calgary Flames players among the NHL DFS top plays tonight. Keep an eye on the NHL Vegas odds page to see if that changes. With Sidney Crosby out for the Pittsburgh Penguins, this opens the door for the Rangers to push their series back to New York for Game 7. Our NHL DFS projections have Alex Ovechkin, Jonathan Huberdeau, and Mika Zibanejad with the highest potential daily fantasy hockey performances today. Plus, you can always use the NHL DFS Match-Up report and the DFS Value finder to help you build your NHL daily fantasy lineups as well. Good luck with your NHL DFS lineups tonight!

With Sidney Crosby out, the Penguins are going to need someone to step up to try and fill his sizable skates. With that said, Jake Guentzel has been a beast for the Penguins in this series, he has scored at least one goal in every game this series, and he should be strongly considered in all lineups today even if Crosby is out. Evan Rodrigues is a strong value option for the Penguins. The points are not always there, but he will shoot in volume as evidenced by his three games with five shots or more in this series. Our DFS projections like Mika Zibanejad today and he has four points so far in this series but is yet to score a goal. We have also seen nice performances from Ryan Strome, Artemi Panarin, Frank Vatrano and Alexis Lafreniere which give us some high-end and value options for the Rangers.

We should continue to consider Kris Letang today. He has at least three blocks in each game, and he is capable of getting you points and shots as well as evidenced in game five, as he will be a big part of the Penguins' powerplay. Mike Matheson is also an option for the Penguins, he comes at a lower price, but he does have six points in this series, but he has a much lower floor as he doesn’t shoot the puck as much or block many shots. For the Rangers, you should consider Adam Fox in a similar fashion that you would Letang, with the difference being that you will need to rely on Fox getting points to hit value, whereas Letang has a much higher floor. You can also take a look at Jacob Trouba and Ryan Lindgren who both have high floors, and Trouba has a higher ceiling among the two players.

If you’re going to play a goalie in this game Igor Shesterkin should be the play. He should see a lot of shot volume with this game in Pittsburgh, and he still has a good chance to get the win based on the money line numbers. We haven’t seen strong play from Louis Domingue so I would look to avoid him today.

There are going to be lots of forward options in this game today, but the name we can’t avoid today is Carter Verhaeghe. He has seven points in his last two games for the Panthers, and even with his price finally pushed up a little bit, he is still a fantastic value. We can pair him with his linemate Aleksander Barkov who has been shooting the puck more in the last four games and is driving the play 5 on 5. We have yet to see a big game from Jonathan Huberdeau as well, so tonight could be the night for him if you’re playing a GPP. For the Capitals, everything starts with Alex Ovechkin. He has a point in all five games, but he has only scored one goal, and he only has one game with five shots or more. I suspect that he will be looking to shoot the puck a lot today with the Capitals facing elimination.  You should also not forget about TJ Oshie who has played really well also. He has five goals so far in this series and will be in a position to be productive today as well.

On Defence, we have seen production from Aaron Ekblad, but he isn’t shooting the puck a lot or blocking shots right now, so at his price, it will be difficult for him to get to value without him either scoring a goal or getting multiple assists, so for me, he is GPP only. You can look at someone like Brandon Montour who is much cheaper, but has the capacity to get you points, just not the same upside. For the Capitals, we have seen plenty of production from John Carlson. He has a goal and four assists in five games and remains a strong play again today.

Sergei Bobrovsky holds the edge here with the Panthers being favored to win this game, but he has really only had one good game in this series and he is always a risk. We will Ilya Samsonov today for the Capitals again. He has a strong first two games in this series, but his play in the last two games has been much less strong.

For the series, the Flames have been the bulk of their production coming from their top line(as you would expect) with Johnny Gaudreau leading the way in both points and shots. Elias Lindholm has also been shooting more and he has three goals already in this series as well. We have also seen Mikael Backlund come alive in the last two games with a goal in each for the Flames and he will be a solid value today as he has shown us throughout the season that he is capable of scoring when he gets hot and he will shoot the puck a lot as well. The Stars have really struggled to score and at times get shots on goal. Joe Pavelski has seen the most success and he along with Jason Robertson would be my choice if I had to take a Stars player today.

In this series, we have seen almost no production come from the backend of either team. Esa Lindell has been a steady source of blocked shots for the Stars and he has contributed a couple of points, and for the Flames, we really haven’t seen anyone be productive in this series, so I would avoid them completely today.

Outside of one start, Jacob Markstrom has been outstanding all series for the Flames, and Jake Oettinger has been just as good or better all series. You should be able to use either player, with Oettinger being the better value as he will likely see more shots, but with that, if he is off today he could end up giving up a lot of goals with that shot volume.