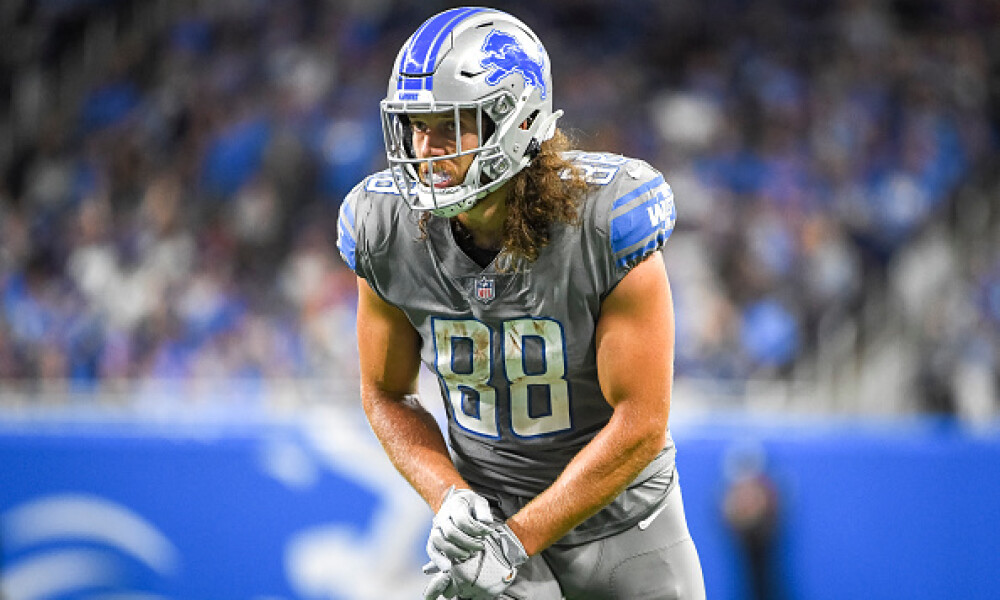 Alright week 3 in the books! Last week our elite tier paid off with Kelce as the TE1 and Waller as the TE3.  Andrews was solid in the mid tier as the TE8 but Kyle Pitts only returned 1.55 points per $.  Jared Cook was mediocre in the shootout vs. the Chiefs but Austin Hooper returned a touchdown in the value tier and we successfully avoided Saints tight ends vs the Patriots.  Not too shabby.  On to week 4!

T.J. Hockenson - Honestly, it bores me to put Travis Kelce here every week but let me make this clear - if you make a team you like and find you have ~$8,100 to spend on tight end, you always use it on Kelce. That’s simple.  But it’s not helping anyone for me to just say start Kelce every time so here’s another option - TJ Hockenson coming off a two target game is probably the cheapest he will ever be.  But nothing really changed for him in the underlying stats.  He played more snaps than any other skill player.  He ran 27 routes.  He didn’t pass block much.  It was just a bad game script.  Take the discount.  Hock and Kelce are both similarly priced on Yahoo and DraftKings.

Mark Andrews - Some people might be scared seeing the Broncos defense as the 4th best vs. tight ends.  But let’s recap who they’ve played.  They played the Giants with no Evan Engram.  The Jaguars in the game James O’Shaughnessy got hurt on his first target.  And the Jets with Tyler Kroft getting hurt (not that that matters).  The surprisingly thing is they aren’t first vs. the tight end.  That should change this week as Mark Andrews has had great alignment and deployment all along but just needed the right game script.  This should be it.  Mark Andrews would account for 10.6% of your budget on DraftKings but only 9% of your budget on Yahoo DFS so slightly better value on Yahoo.

Kyle Pitts- Last year for the first 5-6 weeks I told anyone and everyone who would listen - “Logan Thomas is in the perfect spot to blow up”.  He was playing a huge snap share, playing a ton of snaps at WR, and was the second target on the team.  He was TE26 in PPR through five weeks and he finished at TE4.  I wasn’t even high on Kyle Pitts coming in but he’s getting the ideal deployment for blow up games.  He’s played 110 of his 158 snaps lined up at WR - that’s literally more WR snaps than Rondale Moore has played and it’s only five less than the 115 WR snaps Christian Kirk has played.  This guy has big games to come - if not this week then soon.  This is another player cheaper on Yahoo: would be 10% of your budget on DraftKings DFS but only 8% on Yahoo.

Logan Thomas - Speaking of Logan Thomas - how about Logan Thomas? As he does, he played every single snap last week and ran routes on 33 of 34, only pass blocking on one snap.  He lined up at slot for 37 or his 54 snaps and at WR for three.  The QB play has been troublesome but we’ve seen Taylor Heinicke get it done before and what better place to right the ship than the struggling Falcons?  I’m hoping this is a coming out party in 2021 for both players.  If you want to start Thomas, DraftKings is your best bet to build the team: he accounts for 11.5% of your budget on Yahoo but only 9.8% on DraftKings.

Evan Engram - Evan Engram has done plenty to lower his perceived value between the drops and the fumbles and the injuries.  But here’s the reality.  This guy had the fourth most targets and fifth most receptions of any tight end last year.  He jumped back in after an injury and got six targets for a 17% target share last week. And now Sterling Shepard and Darius Slayton are banged up.  This guy runs a 4.42 forty and can bust one for a touchdown at any time and he’s dirt cheap this week against a team that just allowed 11 targets to tight ends last week.  This is my personal play of the week.  He is EXACTLY 6% of your budget on both Yahoo and DraftKings so he’s good on both platforms.

Cole Kmet - They are daring us with this price.  And we will.  His surface level output has been poor - no question.  But underlying stats is where we get our advantage.  Last week Cole Kmet had a:

Sure it was four targets of twenty.  But you take those percentages and apply them to a real team playing a real game and the output could be beautiful.  This week the Bears get the Lions who at one point were losing 41-17 to the 49ers and, despite a little excitement, haven’t won a game.  This is a get-right game for the Lions offense and at this price he’s practically free.  $3,000 on DraftKings (6%) and $11 on Yahoo (5.5%) makes him just slightly less expensive on Yahoo.

BONUS Dart Throw - Jordan Akins - There’s no bare minimum $2,500 dart throw this week but $2,900 on DraftKings (5.8%) and $10 on Yahoo (5%) isn’t a bad deal.  Pharoah Brown’s output week one scared some people off but he’s the blocking tight end and that was a positive game script game - which the Texans won’t have many more of.  Certainly not this week against the Bills.  Last week in a negative game script game, Akins ran 25 routes to only 8 for Brown and he caught four of five targets.  That’s actually only three fewer routes than Anthony Miller ran.  At this price, why not?

All these guys to me are being lumped together because it’s the same situation for pretty much all of them.  None of them are focal points of their offense and a lot of their production is a big mirage.  For instance, five targets for Pat Freiermuth or Dawson Knox sounds nice until you realize how many snaps the offense played and that these teams were throwing 50 times.  Five of Big Ben’s 58 pass attempts is what? An 8% target share?  And Freiermuth only played 33% of the snaps.  These guys are all the “hot waiver” claims from people that haven’t done the research and are just chasing touchdowns.  Tyler Conklin is destined to be this week’s Maxx Williams.  Don’t chase those guys on your teams and don’t chase them in DFS - no matter how cheap they are.  One of them might even score a touchdown again but who cares.  Sometimes people hit on scratch tickets - doesn’t mean it’s a good bet.