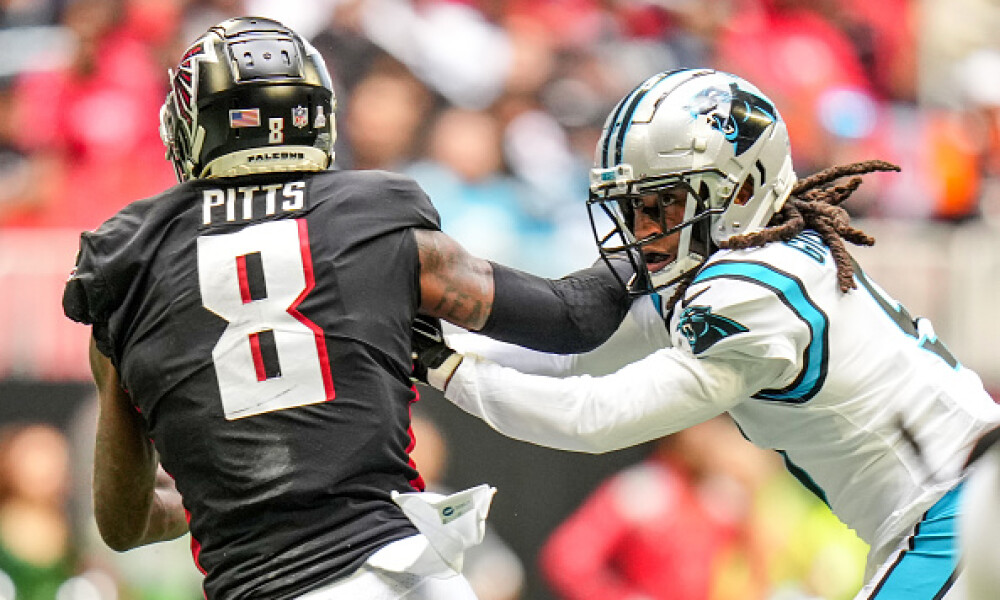 If you are a fantasy football player - and especially a DFS player - you know what the greatest holiday of the year is.  Thanksgiving baby.  Thanksgiving and football go together like turkey and stuffing or your uncle and passing out on the couch during the Lions game.  It’s tradition.  So, in honor of that, we’re going to give you a separate Turkey Day special group of TEs for the Thanksgiving slate.  Because you deserve it!

Value Tier: the bargain bin players that are risky by nature but can have a huge upside in terms of value created

Kyle Pitts - People are going to want to sue George Kittle but that’s not a great idea in our opinion (more on that below in the Fades section).  Instead, we will take the guy who plays WR going up against the Jacksonville Jaguars.  Not only are they not great vs. the pass and not great vs. the tight end specifically, but Shaquill Griffin suffered a concussion and Tyson Campbell sprained his AC joint so they are a little thin in the secondary.  We’ve seen Pitts go off earlier this year with 282 yards in just two games so we know he’s capable of big things in the right spot.  This feels like the right spot.  At 12.2% of your budget on DraftKings and only 10% on Yahoo, Pitts teams should be made on Yahoo.

Noah Fant - This doesn’t seem like the sexy play but this game quietly has a high over/under of 48 points and Denver is only 2.5 point dogs meaning they expect a competitive game. Only the Bucs/Colts (52.5) and Vikings/Niners (48.5) games are expecting more points. The Chargers also happen to be the second-worst team in the league vs the tight this season and Noah Fant has a couple of double digit games on his resume so it’s a pretty sneaky play as someone who doesn’t feel “exciting”.  He’s pretty evenly priced on both Yahoo and DK so pick your poison.

Evan Engram - There will be people that don’t like either of these picks.  And that’s part of what makes them good.  You need to separate yourself from the pack somehow.  And it’s especially important to look for cheap upside if you want to win a million dollars.  Here we have a team who just fired their offensive coordinator.  Engram is involved every week.  He runs a 4.42 so he’s capable of big plays (he’s had a 50+ yard play in each of the last three seasons).  And he faces the single worst defense in the league vs. the tight end. He’s actually cheaper this week on DraftKings (7.6% of your budget vs. 8.5% on Yahoo) but he’s fairly affordable on both.

Ryan Griffin/Brevin Jordan - We’ve put a lot of names out there this week but there is a special slate.  I know people are always looking for that super cheap guy and Engram is $3,800 so, if you absolutely need to find someone bottom shelf to get in there, it’s the guys from the Jets vs. Texans game.  Ryan Griffin is $2,600 on DraftKings and $12 on Yahoo while Jordan is $2,500 on DraftKings and $10 on Yahoo. Griffin is the better option as he has played a healthy snap share and the Texans are terrible vs. the tight end but, if you really need someone who is the absolute minimum price, it’s Brevin Jordan.  Jordan Akins was a healthy scratch last week in favor of him and Pharaoh Brown basically just blocks so he’s the closest thing they have to a pass-catching TE.

George Kittle - As Jon Impemba and I have discussed on the Fantasy Alarm NFL podcast, one of the main reasons teams don’t throw much vs. the Vikings are because they are so bad vs. the run.  With the Everson Griffen issues going on, I find it hard to believe that he plays this week either.  You basically have a team that wants to run the ball going against a team that is terrible vs. the run and that’s usually not a good formula for a tight end who is very good at blocking (as we saw with Kittle in the game vs. the Lions).  He’s the top-priced guy on the main slate so no need to push it.

Hunter Henry - Anyone that knows my work not only knows that I love Hunter Henry from a fantasy football standpoint but I also grew up a Patriots fan.  So when I say this is not a good spot, it’s not a good spot.  Henry has been asked to stay in and block on occasions with multiple games with double-digit pass-blocking snaps and the Titans are a top 10 pass rush team averaging 2.5 sacks a game.  They are also the 6th best team vs. the tight end in terms of DraftKings points allowed.  Henry was already a touchdown-dependent option and he very well might score a touchdown but at his price point, you need more than that.