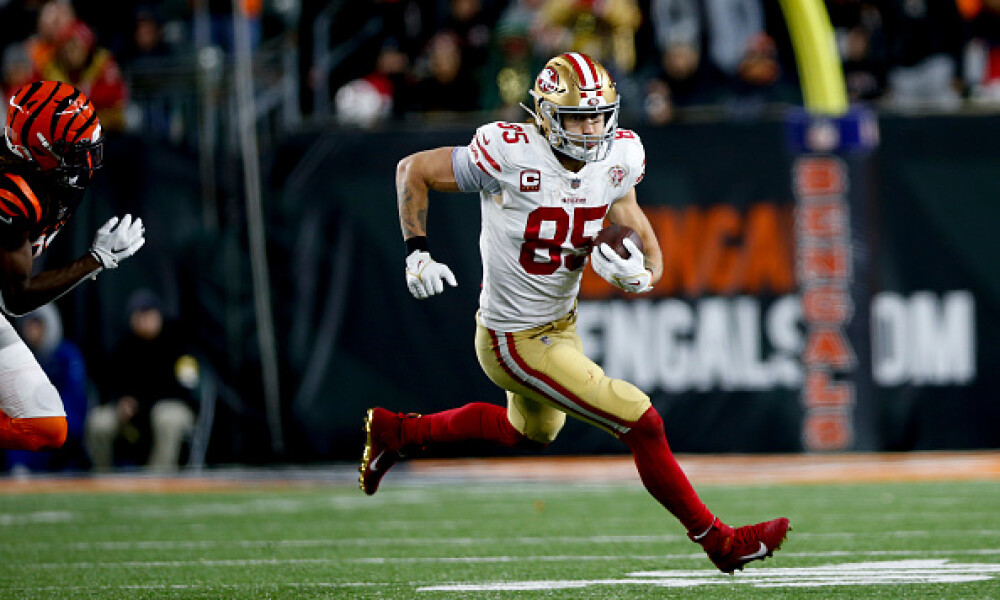 Another rock solid week for the gang.  In the Elite Tier we hit Mark Andrews who was the TE2 and returned 5.34X.  In the Mid Tier we had Dawson Knox as the TE3 who gave us 3.8X.  In the Value Tier we dropped Austin Hooper who was TE5 at 4.12X.  And even Jared Cook at the basement level got us a TD and finished as a backend TE1 (2.75X).

In fact, if you are are true DFS die hard, maybe you took the FULL advice from last week and made a Mark Andrews lineup on DraftKings (TE2) and a George Kittle lineup on Yahoo! (TE1)

George Kittle- With all the injuries and COVID (plus Kelce being a Thursday night play) the options in the elite range are limited. We actually don’t really love Mark Andrews or Dawson Knox this week so the advice is to just start Kittle in the top tier and we are giving you three mid tier options instead.  I don’t really need to explain that George Kittle has been a monster lately or that Atlanta is a good matchup for him so let’s talk about the best way to deploy him in DFS if you want to pay up for the big dog.  He’s appropriately priced on Yahoo at 16.5% of your budget but on DraftKings he’s only 14.6% of your budget so you should be building your Kittle lineups over there if you are making one.

Mike Gesicki - All the injuries and COVID designations this week are brutal for regular leagues but create great opportunities for DFS. Jaylen Waddle is likely going to be out this week.  This is a development that was announced after pricing already came out meaning that based on the formula used to develop prices alone we are getting a discount here. On top of there being more targets, Gesicki gets the Jets who are the 26th ranked defense vs. the tight end. This juicy situation is honestly our play of the week at tight end so make at least one lineup with Mike Golden-ticki.  He’s about the same on DraftKings (10%) vs. Yahoo (9.5%) so he can be deployed on either platform.

Zach Ertz - Here’s another beneficiary of late breaking news - DeAndre Hopkins is likely OUT this week meaning that there are more targets available to go around.  A LOT of targets considering Hopkins got 13 last week.  He didn’t score but Zach Ertz actually got TWO end zone targets last week - one he caught coming back to the ball and ended up at the 1 yard line and the other was intercepted.  He gets the lowly Lions this week so a fairly safe play.  At 10.8% of your budget on DK and 9% on Yahoo, he’s a heck of a lot cheaper on Yahoo.

Dallas Goedert - EDIT- with the postponement of the WAS/PHI game, Dallas Goedert is no longer eligible for the main slate game. Pivot up to Ertz or down to Gesicki in this tier. Your third mid-tier play is probably the most fun one since you get to take part in Minshew Mania.  Jalen Hurts was a late injury announcement and, in this case, the less mobile and more accurate backup QB is actually an upgrade for the tight end.  When Minshew started last week Goedert caught 6 of 6 targets for 105 yards and 2 touchdowns so he’s looking like a rock solid play once again this week.  Goedert is actually more expensive than Ertz on Yahoo but cheaper than him on DK so, if Ertz is a Yahoo play, Goedert is the DK play in this tier.

James O'Shaughnessy - We had both players from the Seahawks-Rams game as our main slate picks in the value tier but, since that game has been postponed, we need to pivot.  The good news is that this price range is still loaded with options.  I really don't understand the pricing on James O'Shaughnessy - he lines up for more of his snaps at WR than he does at TE, he only pass blocks on 2.8% of his snaps, and he's consistently getting 5-6 targets a game.  So why is he only $3,200 on DraftKings (6.4%) and $11 on Yahoo (5.5%). I mean, the bare minimum pricing on Yahoo is $10 and O'Shaughnessy gets the deployment going up against one of the worst tight end defenses in the league.

Josiah Deguara - This play is mostly for those big tournaments or single game slates where you want to make a contrarian play with someone that very few folks will be using.  But what very few folks realize is that Josiah Deguara last week set career highs for snaps, routes run, and targets. Deguara played 37 snaps to Marcedes Lewis's 36 but the routes run clearly indicated that Deguara is on the pass catching side of the tree as he almost double Lewis's routes 25 to 13.  In fact, 25 routes run isn't far off the 29 that Allen Lazard ran.  At $2,700 on DK and the bare minimum $10 on Yahoo, this play gives you a lot of flexibility salary wise.  The Ravens have allowed

EDIT- With the Postponement of the SEA/LAR game, both Higbee and Everett are no longer eligible for the main slate.  Use this advice for the Tuesday or single game slates

Tyler Higbee - Anyone that has read any of my articles or follows me on Twitter might not believe their eyes here.  But I’m actually doing it.  I’m recommending Tyler Higbee.  He has almost NEVER gotten the chance to be a top two target on the team.  Odell was there immediately to replace Robert Woods. But now OBJ has COVID and is likely out. The Seahawks are one of the very worst teams vs the tight end - 28th ranked in DraftKings points.  Don’t you make me regret this Higbee.  He’s literally exactly evenly priced at 8% on DK and Yahoo so you can use him in either spot.

Gerald Everett- Sometimes we don’t really need a long winded explanation for a play.  Tyler Lockett is OUT with COVID - an announcement that came well after the pricing for DFS came out.  Everett gets a revenge game with the Rams.  He’s only $3,500 on DraftKings and $12 on Yahoo.  This is why we don’t really want to spend up this week.  There are good plays lying all over the ground here.

Dalton Schultz - Schultz benefited from injuries all year long so it’s only right that none of the pass catchers on his team get ruled out this week (as of now).  And since Cooper, Lamb, and Gallup have all been healthy, old Schultzy has been on the backburner a bit.  With all the guys benefitting from the COVID situations in terms of pricing, there is really no reason to play an appropriately priced Dalton Schultz in a matchup that isn’t even that good.

Pat Freiermuth - Fantasy gamers love this guy.  I know that. There are some fun podcast memes like the “Muth is Luth” stuff etc.  I get it. But this is just not a spot to use him. Like Schultz, most of his team is intact this week.  Unlike Schultz though, he doesn’t have a “not good” matchup.  He has a terrible one.  The Titans are VERY good at shutting down the tight end.  And you have to imagine they saw the end of the last Steelers game where they went to Muth twice in the end zone with the game on the line.  So just don’t do it this week.  Pay up a little more for Gesicki/Ertz/Goedert or go with a value tier play.