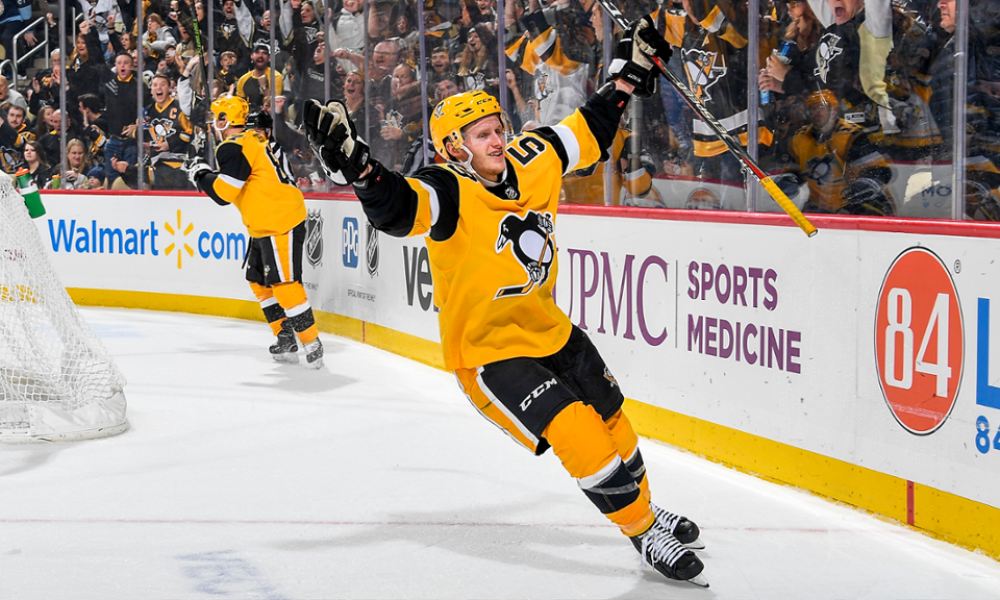 The NHL playoffs continue tonight with three games on the NHL DFS slate for DraftKings, FanDuel and Yahoo! When looking over today's NHL DFS projections we are going to be building our core lineup around with Pittsburgh Penguins as our top NHL DFS picks today, notably Sidney Crosby as our NHL DFS top play against the New York Rangers. When looking for a top NHL DFS value play today I think Washington Capitals center Nicklas Backstrom in his matchup against the Florida Panthers is worth taking a look at as he has five points in four games during this series. Don't forget to check out the NHL DFS lineup generator when using today's core plays.

The Pittsburgh Penguins have been the better team in this series and that shouldn’t change tonight. The New York Rangers need to turn things around quickly or their season will be over. Both teams offer a ton of value, so don’t ignore either side.

Pittsburgh's top line has been dominant in this series, specifically Sidney Crosby. He has nine points in four games and is a must-play in any cash game lineup. If Crosby is too rich for you, Evgeni Malkin is another option to consider. He doesn’t have as many points, but he’s playing well and has the upside.

If you don’t want to go with either centreman, Jake Guentzel is the next-best option. He has six points in his last four games and is firing the puck on goal a ton. The shots alone is a good enough reason to rock with him as a single-bullet in cash games.

On defence, Kris Letang is the only defenceman worth paying up for. We know what he can do offensively, but he’s blocked three or more shots in every game this series and that trend won’t change tonight. His floor is extremely high and that is something we don’t want to pass up on.

I’m not a fan of Louis Domingue tonight, but we can’t ignore what he’s done in this series. He’s come in and has done a fantastic job, but $8000 on DraftKings is just too much for me. He’s more of a GPP play if you aren’t on the Penguins tonight.

For the Rangers, Chris Kreider and Frank Vatrano are the only forward to really care about. Kreider isn’t shooting the puck enough, but that hasn’t been a problem for him all season. His two goals in the series are fine, but he needs to step up and that could come tonight. Vatrano is $4400 on DK and continues to see top line minutes. He’s a great value play that will allow you to pay up elsewhere.

If you want to get really bold, Kaapo Kakko and Alexis Lafreniere are both $2500 and are skating together on the third line. I don’t know what both youngsters are going to give us tonight, but a point and a couple of shots on goal from each is enough to hit value. You could do a lot worse in a GPP.

On the back end, K’Andre Miller is the defenceman to own. I’m not paying up for Adam Fox or Jacob Trouba because I just don’t like their value. Miller hasn’t been great in his last two games, but no one for the Rangers has, so I’ll take my chances here and hope for the best.

Igor Shesterkin has been pretty bad, but maybe a return home is what he needs. He’s been excellent all season on the road, but he’s failed to finish either of the last two games and has given up a total of ten goals in three periods of hockey. He needs to step up and play better, but I don’t know how much I trust him tonight. I’ll take a chance with him in a GPP, but I can’t back him in cash games.

The Capitals head back to Florida with their series tied at two. They’ve played very well up to this point and that trend should continue in game five. The Panthers haven’t been good, but they have a chance to turn everything around in this game.

For Washington, Nicklas Backstrom is the player I’m going to have the most of. His $3600 price tag is soft, even for a player that doesn’t shoot the puck a ton. We know he can rack up points, and with how Sergei Bobrovsky has been playing of late, that shouldn’t be too hard. If you’re looking to pair him with a winger, T.J Oshie is my first choice. Like Backstrom, he’s affordable and has three goals in four games. Alex Ovechkin is going to be popular, but we are looking for value here and Oshie gives us a ton of that.

On the blue line, Dmitry Orlov is the new Alec Martinez. He has finished with three blocked shots in the last three games and is playing over 20-minutes a night. The Panthers are a team that shoots the puck a ton, so that is great news for defencemen who block shots. He’s another player that won’t cost you much. John Carlson is another name to keep on your list. He’s $5900 on DK, which is kinda low when you consider what he’s capable of doing. He can block shots here and there, but it’s his offence that we are targeting, and he has four points in the last four games. If you’re looking for a stack for this game, consider Backstrom/Oshie/Carlson.

I know it’s not ideal to play a goalie against Florida, but Ilya Samsonov has been excellent in his two starts and he is only $7400 on DK. Florida has yet to score a power play goal in this series, and while that will happen at some point, Samsonov is going to see a ton of rubber and that should lead to him being able to hit the save bonus. If he doesn’t give up more than three goals, he has a great chance at hitting value.

On the Florida side, Sam Bennett and Carter Verhaeghe are the only two forwards I can about. I have no problem with anyone who wants to play Aleksander Barkov or Jonathan Huberdeau, but both players aren’t hitting value, so I’m not going to overpay for them tonight. Bennett was really good last game and Verhaeghe has been the best Panther in this series. Both players are affordable and get you the exposure to need.

I can see an argument for playing Aaron Ekblad tonight, but I don’t know if I want to get behind his $6100 price tag. He isn’t blocking as many shots and he’s not taking shots on goal, so where is his upside? Couple that with the Panthers’ power play not working, and this just seems like a high risk with very little reward. If you still want a Florida defenceman to think about, Ben Chiarot is the way to go.

I’m not going to spend much time talking about Sergei Bobrovsky because you shouldn’t be playing him, period. He’s #NotGood and that isn’t changing tonight.

I’m going to keep this section short and sweet because both teams have very little value to target. This series has been all about the goalies, and that will continue to be the case. That isn’t a bad thing, but from a DFS standpoint, I’m not investing a ton of salary in players who won’t score goals.

For Dallas, Jason Robertson is the only forward I care about. He has ten shots on goal in the last two games and is the only forward with a solid floor. Can Joe Pavelski or Tyler Seguin do good things? Of course, but I don’t want to sink money into players who don’t shoot the puck and who are dependent on points.

It’s the exact same story for the Calgary Flames. Johnny Gaudreau is the only Flames forward that is shooting the puck, so he’s the only player worth considering. He’s gotten better as the series has moved on, and his $6200 price tag is actually pretty reasonable. I can get behind him as a single-bullet in all formats.

On the back end, Noah Hanifin and Miro Heiskanen are two defencemen under $5K who have some upside. Hanifin is shooting the puck a decent amount and he can also block shots. Heiskanen doesn’t have as much upside offensively, but he can block shots and he’s seeing a ton of ice time. Both players are good options in either format.

It’s rare that I like both goalie options in the same game, but that’s the case with Jacob Markstrom and Jake Oettinger. Markstrom has been really good in this series and the Flames are heavy favourites to win. He makes sense in cash games if you trust Calgary to win. Oettinger is getting no respect and that’s just rude. He’s been excellent this series, but he’s discounted all the way down to $7600 after stopping 50 shots in his last start. Even without the win, that was more than enough for him to hit value and more. He’s given up only six goals in this series, so why are we acting like he’s not good? I would play Oettinger in any format regardless of what anyone says. He’s been elite up to this point and that’s not going to change anytime soon. Someone is going to win a GPP because of him, so make it yourself.