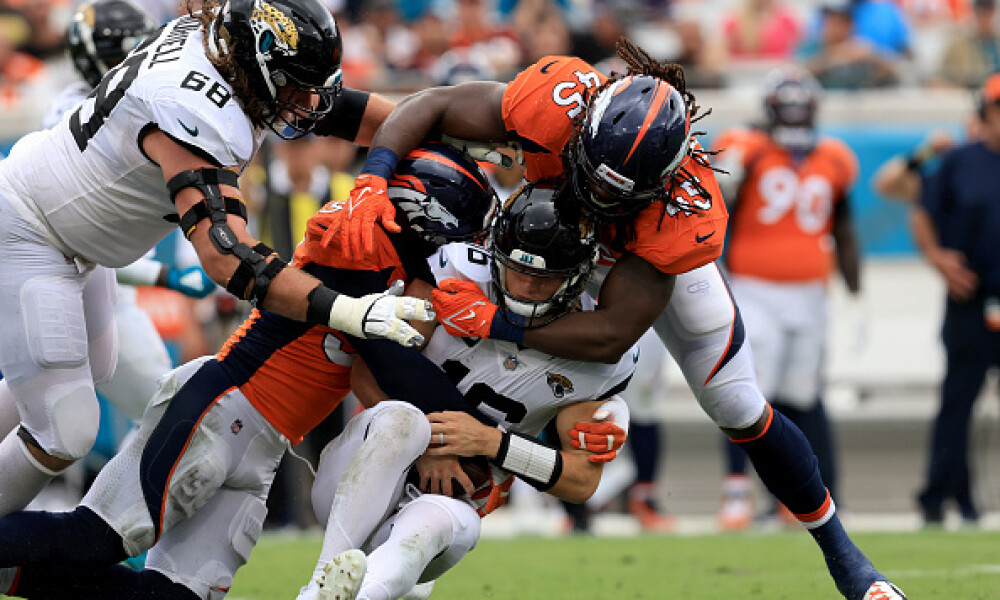 Denver Broncos – The Broncos haven’t played very good offenses lately and that trend will continue heading into Week 3. Denver has been great stuffing the run and they’ve allowed 13 points in each of their first two games with just 503 total yards of offense allowed. Zach Wilson threw four interceptions last week against New England and now the Jets have to go to Denver to take on this stout unit. Wilson’s also battling a groin injury and Vegas has the projected game total at around 41.5 points and the Broncos are ten-point favorites. I don’t like paying up for defenses but the Broncos are safe this week.

New England Patriots – The Patriots are coming off a dominant Week 2 against Zach Wilson and the Jets and they’ll welcome the Saints to Gillette Stadium this week and wouldn’t ya know it, Jameis Winston has a tendency to throw interceptions in bunches as well. Now the Saints have been limiting how often Winston can air it out, but he was also sacked four times last week and the Patriots pass rush has six sacks through two games and just 23 total points allowed. The Pats are favored by just a field goal but Vegas isn’t projecting a ton of scoring. Truthfully, this game could be ugly but it’s certainly appealing for the D/ST’s involved because I think the Saints are in play as well at just $3,100 on DraftKings.

Las Vegas Raiders – We could potentially be looking at the most popular defense this week. If you aren’t paying up for Denver of New England, you can save some coin in this matchup. The Raiders host the Dolphins this Sunday and Tua Tagovailoa will not be starting for Miami. In his career, Jacoby Brissett has thrown 31 touchdowns to 14 interceptions, but he possesses a lowly 3.0% touchdown rate in his career. He’s not going to pose much of a threat to the Raiders, who have shown a pretty lethal pass rush through two games. The Dolphins offensive line is atrocious, currently ranking dead last in pass protection through two games according to Pro Football Focus. The Raiders are only four-point favorites, which seems generous. This team is  definitely Cash and GPP eligible this week.

Cleveland Browns – The Browns get to host Justin Fields in his first career start. Since the news of Fields starting broke, the expected scoring total dropped four points and the Browns are now favored by a touchdown. They still have a pretty solid pass rush and home field will give them one hell of an edge against a rookie making his debut. Fields looked great in the preseason and he has a great matchup next week against the Lions lined up. His debut could be rough on Sunday. I prefer the Browns more in GPP’s than Cash games.

Arizona Cardinals – The Cardinals didn’t even come close to following up their Week 1 performance, but there’s a good chance they can do so this week. West coast team travelling East? Sure. But what have the Jaguars done offensively through two weeks to instill fear in the opposing team? 584 total yards of offense, 28 total points scored (I’m not giving the offense credit for a kick six), and out of 120 possible minutes the Jaguars have possessed the ball for just 46 minutes. So they can’t keep the offense on the field and this is a good opportunity for the Cardinals to bounce back from just one point on DraftKings last week.

Indianapolis Colts – The Colts D/ST has underperformed to start the year. But to be fair, the NFL did them no favors by starting them off with the Seahawks and Rams, and now they embark on three straight road games. They’ve allowed 55 points and 752 yards of offense through two games, but they salvaged Week 2 with a touchdown. This week, they do draw the Titans. Now the Titans certainly can put up points, but they’ve been a bit sluggish through two games. They came back to win last week because Pete Carroll got soft on defense and the Titans came back to win in overtime. But the Cardinals had an impressive showing against the Titans in Week 1 and the Colts still have talent on this side of the ball and they’re arguably better than the defenses of Seattle and Arizona. I don’t like them in Cash this week but I think they can put enough pressure on Ryan Tannehill to disrupt the offense. The question is whether they can stop Derrick Henry, which is highly unlikely.

Los Angeles Rams – It’s awfully tough to sit the Rams at such a generous price tag. They’ve had a real nice floor so far. It helps when you get three sacks and a pair of turnovers in each of your first two games. However, they draw the defending champs this week. The projected total for this game is in the mid-50’s and it’s arguably a pick ‘em as of Wednesday night. Despite this being a home game for the Rams, I don’t expect Tom Brady and Co. to struggle.

New York Giants – I don’t quite understand how the Giants are just $100 cheaper than the Raiders on DraftKings, nor how they’re more expensive than the Browns, Saints, and Cardinals. Sure, they’re playing Atlanta but the Giants have allowed over 400 yards of offense in both games with just three sacks and two total turnovers. As bad as the Falcons have looked on the offensive side of things, both teams could flourish on offense and I don’t see why you’d pay for the Giants aside from them being a leverage play.