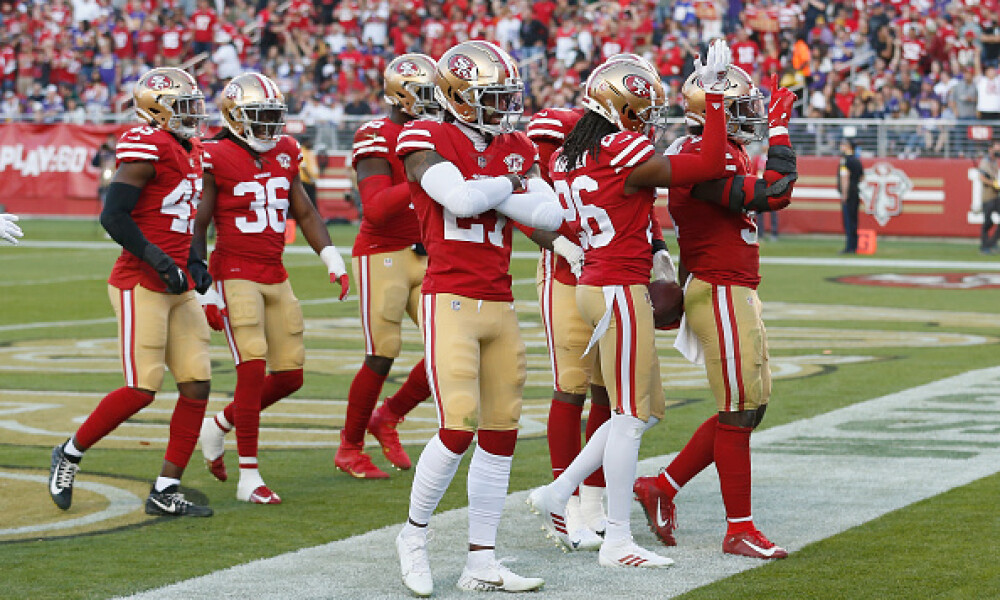 Los Angeles Rams – Most weeks, I’m willing to pay down at D/ST. But this week features some weak value options that I don’t have a ton of confidence in. Luckily, DK didn’t go overboard with the more expensive teams this week. The Rams kick off the D/ST Coach this week. This group has been largely disappointing for DFS and season-long fantasy, but in this matchup they should be able to feast on a team with a rookie quarterback prone to turnovers and could struggle on the road against Aaron Donald and Co. The over/under is currently pretty high at 48 points but the Rams are 13-point favorites, which gives the Jaguars an implied total of 17.5 points.

Philadelphia Eagles – To begin the season a lot of fantasy pundits were saying we can’t assume we’re getting the same old Jets that we’ve seen in years prior. Well as it turns out, they’re still the same old Jets that we’ve seen in years prior. It doesn’t matter who they start at quarterback, the results will be less than impressive. My one knock on the Eagles D/ST is that they’re too dependent on a D/ST touchdown. But the Jets are bad enough where they’re losing the turnover battle at a clip of -1.4 turnovers per game, worst in the NFL. I may limit exposure to just GPP’s because there are cheaper Cash game options floating around. The Eagles have just two sacks and four turnovers forced over the last four games, but again… It’s the same old Jets this week.

Tampa Bay Buccaneers – This is likely the cheapest we’ll see the Bucs D/ST on DraftKings and FanDuel so they might be worth taking advantage of. There are some concerns because this isn’t a slam dunk by any means. This is a road game for Tampa and the defense is giving up 27.2 points per game on the road compared to just 16.8 at home. This is also a divisional game and there’s always the chance the Falcons show up with their best effort. Opposing teams have had difficulty stopping Cordarrelle Patterson no matter what role he’s in. But the Bucs defense has been teeing off on lately. Over the last two weeks they’ve forced five sacks and eight turnovers. Fortunately, the Falcons offensive line is an embarrassment to offensive lines across America and this looks like the kind of matchup the Bucs could easily swash buckle their way to a productive day in DFS.

Miami Dolphins – The Miami Dolphins defense has been STRONG the last month. Over their last four games they’ve allowed a total of 46 points, and they have 16 sacks to go with ten turnovers. They’re also averaging 11.2 fantasy points per game at home and just 3.8 on the road. With Miami finally getting healthy on the defensive side of the ball, we should be very interested in this matchup for fantasy purposes. They’re four-point favorites and the over/under is currently around 40.5 points. The Giants offense is averaging just 242.0 totals yards of offense over their last three games and 15.3 points per game over that span as well.

Minnesota Vikings – I don’t really like the Vikings to ever break the slate, but if there was a time to do it, it would be this week against Detroit who could be without D’Andre Swift. That still means they could go heavy with Jamaal Williams who has value here. But I like the Vikings because they do put pressure on the opposing team’s quarterback. They have at least two sacks in every single game this year. The Lions rank in the bottom ten in terms of pass protection so the sacks could be there. But the Vikings do tend to bleed offensive production. They’ve allowed over 400 yards of offense in four of their last five matchups and three of those opponents put up 30+ points. Now the Lions don’t have the offensive prowess of the 49ers, Chargers, Packers, Ravens, and Cowboys so don’t let that steer you away from this matchup.

San Francisco 49ers – This is a defense trending in the right direction and we like this spot for DFS purposes. The 49ers have been exceptional in stopping the run the last three weeks. Against the Vikings, Jaguars, and Rams they’ve allowed a total of 173 rushing yards and they’ve only given up 46 points in that span. The Seahawks have struggled to run the ball lately. It’s incredibly frustrating as this is a cornerstone of Pete Carroll’s offense. Seattle is routinely losing the time of possession battle on offense as well. On the season they’re only averaging about 24 minutes on offense. Over their last three games they’re only averaging 20 minutes on offense. They just can’t convert on third down and recently went out and signed Adrian Peterson to try and bolster the run game. And of course the Seahawks are no stranger to letting Wilson get sacked multiple times so this is a great spot for San Francisco to provide us with a nice day. But I will note that these NFC West divisional games tend to be pretty competitive. So as bad as Seattle has looked lately, I don’t anticipate that they’ll just roll over in this contest.

New York Giants – Rarely do I consider the G-Men, but I think there is GPP appeal here. They’ve returned double-digit points in three of their last five games, and at least seven points in four of their last five. The Dolphins offense does concern me a little bit, especially after the chemistry Jaylen Waddle and Tua Tagovailoa have shown in recent weeks. But the Dolphins still grade out as the worst offensive line in terms of pass protection according to Pro Football Focus and I think the Giants could come out and get at least three sacks this week. Additionally they’ve also forced ten turnovers in their last four games against the likes of the Eagles, Buccaneers, Raiders, and Chiefs. I don’t like this play for Cash games, but they truly don’t need to do very much for 2X value.

Washington Football Team – As mentioned at the top, the value options this week are pretty difficult to trust so I likely won’t be paying down this far in Cash games. If you do need to venture this low, I don’t mind Washington this week. Obviously, I’d feel more confident in utilizing this D/ST if Chase Young didn’t get hurt. But they get a road matchup against the Raiders and some of Las Vegas’ best offensive weapons are beat up heading into the week. Darren Waller likely sits, DeSean Jackson was absent from Thursday’s practice, and Josh Jacobs has been limited as well. Over their last four games they’ve held opposing offenses to a total of 73 points and they haven’t allowed a team to collect 300 yards of offense in that span. Part of the success of this defense can be credited to the offense. Washington has been dominating time of possession at nearly a 65% clip over the last few games. Where I don’t trust Washington is racking up DFS points through sacks and turnovers. They average about two sacks and one turnover per game, which is fine considering how they can limit opposing offenses. However, we would like to see more of a floor in that regard.

Los Angeles Chargers – I don’t get why the Chargers are priced as a mid-tier D/ST when they’ve been anything but over their last handful of games. $3,000 on DraftKings isn’t awful, but when you can fit in the 49ers at the same price or pay up a little bit to the Vikings and Dolphins you should definitely go that route. This could be another monstrous game for Joe Mixon against one of the worst run defenses in the league, and Joe Burrow is looking for a bit of a “get right” game as he hasn’t looked like himself the past few weeks. The Chargers love giving up yardage and points to opposing offenses. And overall, this defense just hasn’t looked great when they’ve had to play in the 1:00pm ET window.