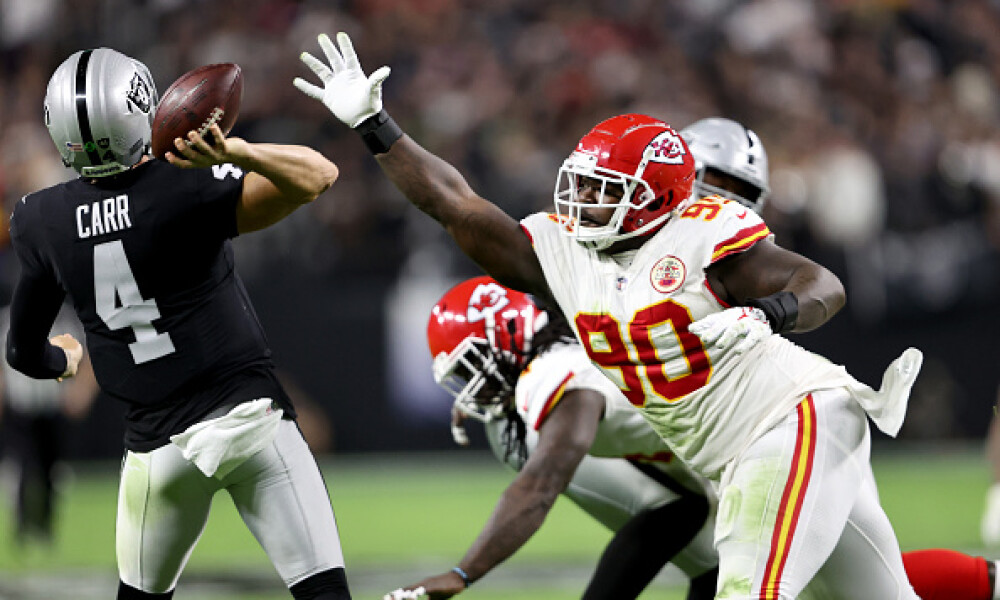 Denver Broncos – While Pro Football Focus may not agree with me, I personally think the Broncos have been playing better football of late. Only once in their last six games did an opponent score more than 18 points on offense. While the Broncos may let you move the ball between the 20’s, they’ve done well to keep teams out of the end zone. Even last week, the Chiefs offense only put up 16 points on them. Now the Lions come to town and Detroit possesses one of the worst offenses in the league and they’re coming off their first win. Do we expect them to hold that momentum coming into Week 14? It’s possible, but I’d bet against that happening. The over/under is currently set at 42 points and the Broncos are favored by ten points. That gives Detroit an implied total of almost 16 points.

Tennessee Titans – At $600 cheaper on DraftKings than the Los Angeles Chargers, you have to like the Titans as a more expensive option. I do like the Saints for $100 cheaper, but remember that the Saints are not a great fantasy D/ST. Both teams are playing as big favorites this week against teams that turn the ball over. I’ll take the Titans over the Saints because they’re bigger favorites and they’re at home. The Titans went through a ridiculous stretch where they returned a total of 45 points on DraftKings facing the Chiefs, Colts, and Rams and then just four total points against the Patriots, Texans, and Saints. But the Jaguars struggle offensively. They tend to bench their best player (James Robinson) for a couple untimely fumbles and Trevor Lawrence has just one touchdown pass in his last five games. I don’t love the ceiling for Tennessee this week, but they have a solid floor.

Kansas City Chiefs – As much as the media (and myself) love to take a dump on the Chiefs defense, they’ve actually been good this year, especially more recently. They’ve held each of their last five opponents to 17 or fewer points and while it’s likely they bleed some yardage, they’ve done well in other departments to offset any negatives. Over their last five games they’ve forced 11 turnovers and have 12 sacks. This will feel like an earlier game than normal for Vegas and they’ll be playing in the colder elements at Arrowhead Stadium.

Carolina Panthers – This game features a surprisingly low over/under at just 41.5 points. Some sportsbooks have that as the lowest on the entire slate for Week 14, so why not consider the favorite in that game? The Panthers will host the Falcons and we know enough about the Falcons at this point. The main challenge will be containing Cordarrelle Patterson. The Panthers actually did okay limiting him in their first matchup in Week 8. He only rushed for 39 yards and had 35 receiving yards, but he did find the end zone. The Falcons offensive line is terrible in pass protection and the Panthers can collect multiple sacks. The beauty of playing the Panthers is this could be one of those “slate breaking” D/ST’s and they could be under the radar. If you can afford the $2,800 price tag on DraftKings you can certainly plug them into your GPP builds. They’re more of a fade for me on FanDuel as the second-most expensive team over there.

Cleveland Browns – The Ravens offense has hit a bit of a snag lately. Over their last four games the Ravens have scored just 61 points and are truly having issues finding the end zone. The Browns are coming off their Bye week and they played the Ravens prior to their Bye week in a losing effort. But the Browns defense held Baltimore to just 16 points despite the Ravens dominating time of possession at a 61.7% clip. The Ravens are incredibly beat up on offense, especially the offensive line and the Browns have the luxury of playing at home. This game opened with the Ravens favored by one-point and the over/under was at 45.0 points, but it has since flipped to the Browns being favored by nearly a field goal and the over/under has been bet down to 43.0 points. The Brownies are one of my favorite value D/ST’s on the board today on DraftKings.

New York Giants – I don’t think I’d look at the Giants on FanDuel because $3,800 is a little too expensive for my liking. But at $2,300 on DraftKings they’re firmly in consideration as a “position of variance” kind of play. The Chargers are going through some COVID issues at the moment and could be without both Keenan Allen and Mike Williams. I’m more concerned about the road matchup as the Giants give up 26.5 PPG and 399 YPG while surrendering just 18.0 PPG and 331.5 YPG at home. But at this price tag and given the circumstances surrounding the other team’s offense you can plug them in and hope they can return four-to-six points, which you’ll take in Cash games. If they can force a few turnovers then that’s gravy.

Los Angeles Chargers – They won’t be a full fade for me, but they will be a “lighter than the field” play for me. I certainly don’t like playing the most expensive D/ST most slates. This is a group priced up simply because of the matchup against the Giants at home. Last week the Bolts were dominant forcing four turnovers and six sacks against the Bengals. At just $3,000 on DraftKings they returned 20 points. However, in their previous five games following their Bye week they returned a total of ten points. Why pay up for the most expensive D/ST in a good spot when there are cheaper D/ST’s that we have more faith in that are in spots just as good or better?

Atlanta Falcons – Here is a full fade for me. The Falcons have allowed the third-most points this season (332) and have the fifth-worst point differential (-116) across the entire league. I don’t mind the price on FanDuel but there’s no way to justify the mid-range $2,900 price tag on FanDuel. I understand they’re playing the Panthers without Christian McCaffrey, but they also did that in Week 8 and only returned three points on DraftKings. This is a bad defense that should be $500 cheaper. You can get a similar output this week by paying down and using the savings to upgrade at running back or wide receiver.