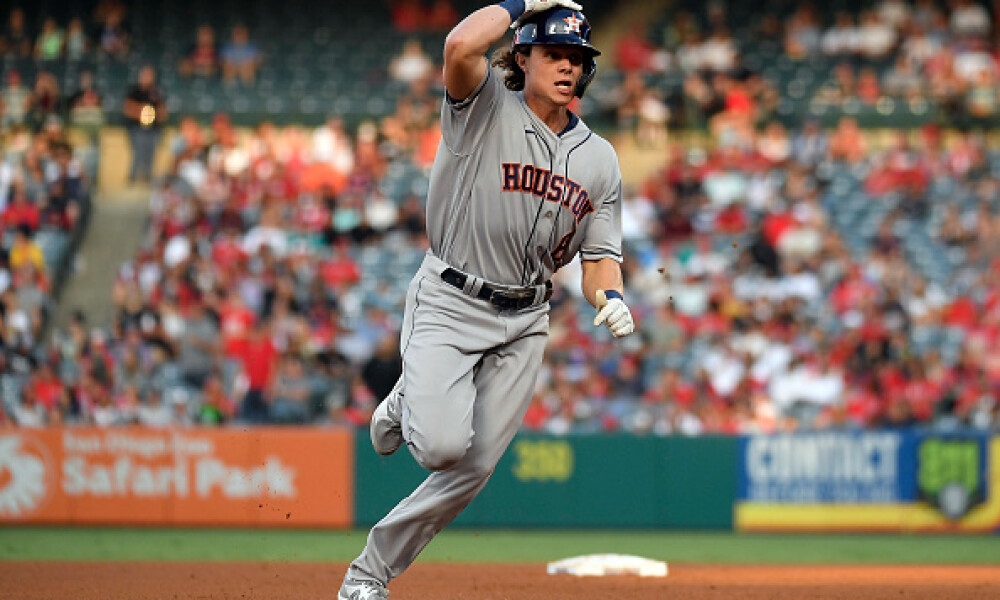 Tonight's main slate comes with some weather issues, but hopefully no postponements. Please check before lock for any last minute changes if playing any DFS contests. There's some intriguing match-ups but no Coors Field, so lineup builds could find differentiation through upside bargain bats. Remember, any player at a lower price usually happens for a reason. Good luck!

Ranking among the American League leaders in home runs since the All-Star break, it's easy to overlook Mayfield but he's a boom or bust option for tournament play this evening. He faces southpaw, Tarik Skubal, giving up 2.3 home runs per nine innings this year which suits his skill set well entering tonight's match-up with a .387 isolated power through 34 plate appearances this year. Add in his .250/.317/.572 slash in the second half and profit if he launches a home run tonight in Detroit.

Another potentially low-owned target on this slate, in a limited sample, Meyers owns a .294/.368/.706 slash against right-handed pitching since his promotion with a double and two home runs in 19 plate appearances. This equates to a robust .412 isolated power with a 1.074 OPS. Of course, he's also recorded seven strikeouts against one walk, so like Mayfield above rates as an all or nothing play with upside if he racks up an extra-base hit or hits a home run.

A bonus play for the FAmily on tonight's slate. Suarez continues his transition as a starting pitcher after logging 4.1 innings giving up three hits, an earned run and two walks with four strikeouts his last time out against the Dodgers. In the second half, he possesses a 1.76 ERA with a 1.17 WHIP over 15.1 innings and a 25.4 strikeout percentage. One would prefer he gets a chance at the win bonus, but there's a chance he returns two-to-three times value in a repeat of his last outing with potential for more if he lasts five innings in the desert.

Taking advantage of injuries depressing the price point of a talented player, Robert can be used at home versus a left-handed starter tonight. He's racked up four doubles and a home run this year against them with a .355/.412/.581 slash line and a .226 isolated power. Better yet, he's part of a strong lineup and could steal a base or hit a home run making him an alluring play tonight.

Produced his team's only run with a solo home run off of Tyler Anderson last night and gets another southpaw, Marco Gonazles, this evening. Ibanez carries a .297 batting average facing left-handed pitching with two home runs this year and could repeat his efforts from Tuesday in a similar circumstance.

Armed with the better price tag on FanDuel, Vaughn leads his team with a .330 isolated power facing left-handed pitching generating 10 doubles and seven home runs with 36 runs plus RBI this year against them. Backed up by his 1.067 OPS and .319/.418/.649 slash line, he's in a prime spot in tonight's match-up with Cole Irvin. Not in lineup for White Sox... UPDATE: Vaughn is not playing.

Looking for a measure of revenge, Tsutsugo recorded a pinch-hit double during his debut with Pittsburgh on Monday, after being waived by the Dodgers, then hit clean-up on Tuesday night, with another double. Tonight, he faces Mitch White, who gives up 2.3 home runs per nine innings this year putting Tsutsugo into an envious position as a slugger way below the radar and could return four times value with a home run. Tremendous pivot on this slate.

Surging since the All-Star break, Toro owns a .277/.370/.521 slash with six home runs and 12 RBI over 22 games spanning 108 plate appearances. His 9.3 walk rate versus a 13.6 strikeout percentage insulates his floor from a DFS standpoint reaching base in 37 percent of his at-bats in this sample. If Seattle gets to Mike Foltynewicz tonight, Toro should be an active member of it, fueling his upside at this price point. He's also 3-for-5 in past meetings with a double in them.