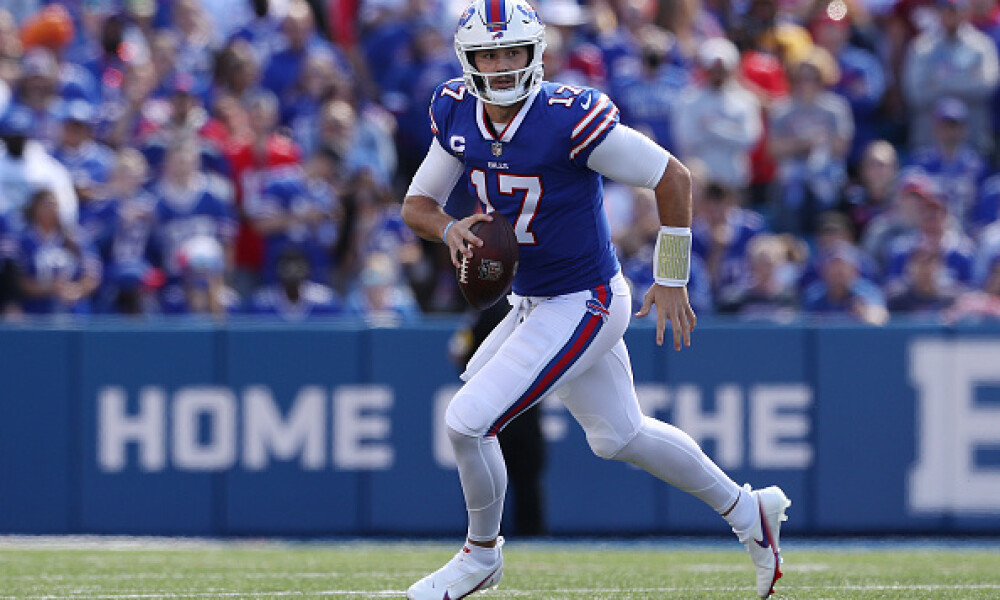 Josh Allen, BUF – After two below average games to start the season we saw Allen explode in Week 3 for 358 yards and four passing touchdowns while adding a rushing touchdown for good measure as the Bills trounced the Washington Football team. In Week 4 the Bills are home once again and this time welcome in the lowly Houston Texans. Buffalo is expected to win big this week and another short of a multi-touchdown effort from Allen would be a complete disappointment against this Texans defense that allowed Sam Darnold to throw for over 300 yards and rush for two scores in Week 3.

Matthew Stafford, LAR – Stafford has been as advertised through the first three weeks of the season, completing 70-percent of his passes for 942 yards with nine touchdowns and just one interception. In Week 3 he torched the Tampa Bay Buccaneers for 343 yards and four scores. Week 4 brings an interesting opponent in the Arizona Cardinals who currently have a defense that is second in takeaways and fourth in sacks, but the majority of that production has come against the Titans in Week 1 and the Jaguars in Week 3. In Week 2 against a formidable offense in the Vikings we saw Kirk Cousin throw three touchdowns. I think Stafford connects with Kupp and Woods in this one to put on a similar performance against this defense that has been boosted by some easier matchups so far.

Patrick Mahomes, KC – Week 3 was a tractor pull for those who rostered Mahomes as he and the Chiefs offense just did not look good during the first half of the game against the Chargers. Fortunately, they play two halves in football and the second was much better than the first for fantasy managers and ultimately Mahomes ended up putting forth a respectable 24.9 DK points. In Week 4 we see Mahomes once again right at the top of the price pool at the position and has a matchup against the Eagles who we just saw get torched by the Cowboys. A notable performance in that matchup between the Cowboys and Eagles was that of Dallas tight end Dalton Shultz who had six catches for 80 yards and two scores. The Eagles are going to have their hands full in Week 4 with Travis Kelce if their struggles against the tight end position continue and that is great news for Patrick Mahomes.

Dak Prescott, DAL – On paper, the Carolina Panthers have the best defense in football. They have allowed just 30 total points through the first three games of the season while totaling 14 sacks and holding their opponents to under 200 yards per game. The problem with just looking at the stats is that they don’t always tell the entire story and that story would be that in those three weeks the Panthers have faced the Jets, Saints and Texans. None of those teams are exactly the class of the NFL. Enter the Dallas Cowboys who have Prescott, Ezekiel Elliott, CeeDee Lamb and Amari Cooper as well as the likes of Tony Pollard, Dalton Schultz and Blake Jarwin who are all also contributing to this Dallas offense. I think this is a week where we see if the Panthers defense is legit or not and I am willing to roll with Dak and the Cowboys offense here in hopes of low rostership in contests.

Jalen Hurts, PHI – Hurts really hasn’t looked great throwing the football at times this season but his mobility his helping stabilize his fantasy production. This is also shaping up to be a really good matchup for him as the Chiefs defense has struggled against all opponents this year which has led to their surprising 1-2 record. With a high game total and an expected shootout against the Chiefs, Hurts is going to be popular this week.

Kirk Cousins, MIN – I am having been in all in Cousins since the start of the season and through three weeks he has been a fantastic fantasy play, having thrown eight touchdowns while completing over 70-percent of his passes. He is averaging 25 FP a game right now in DFS and yet the price tag really hasn’t moved much on him despite the numbers. In Week 4 the Browns come to Minnesota in what could be a pace down spot for the Vikings if the Browns are able to successfully control the clock with their running game but if Minnesota can jump out to an early lead then Baker Mayfield will be forced to throw a bit a and that is going to benefit Cousins in this matchup.

Sam Darnold, CAR – It feels like Darnold is going to be very popular this week given his start to the season and the matchup here against the Cowboys. The price on DK is very cheap, especially given the cost of the receivers in D.J. Moore and Robby Anderson, who is bound to explode at some point. Darnold is completing 68-percent of his passes on the year while averaging close to 300 yards passing per game. In Week 3 he rushed for two scores and now has three rushing touchdowns on the season to go with three passing TD’s. With Christian McCaffrey out for this one, the Panthers will rely on Darnold to move the football. In a game that is expected to be high scoring, the appeal makes sense.

Taylor Heinicke, WFT – It doesn’t really matter how the points come as long as they come in DFS so, while Heinicke may have only completed 58-percent of his passes in Week 3 and had two interceptions, he also had three total touchdowns which lead to him finishing with 23 fantasy points against Buffalo. In Week 4 he gets an easier matchup against the Atlanta Falcons and while Week 3 was rough, we saw in complete 73-percent of his passes for 336 yards and two touchdowns in Week 2 against a bad Giants defense. I think we see closer to that in Week 4 here against Atlanta.

Jimmy Garoppolo, SF – The 49ers offense is a tough nut to crack. They want to be a run heavy team that controls the football but their running backs right now are complete trash. We have seen Jimmy G be able to push the ball downfield before but this scheme is not set up for him to really do that. In Week 4 they face a Seahawks team that wants to push the pace and go downfield which may turn this one into a shootout if the 49ers defense is not able to hold. The receivers in San Francisco are talented, and they are all priced nicely. If Garoppolo can get us close to 20 FP like he did in Week 1 and Week 2 he will pay off value big time.

Ryan Tannehill, TEN – Instinctively you will see the Jets on the schedule and want to go in this direction and it could very well pay off for you, but I am really feeling like this will be a Derrick Henry takeover game here with the Jets defense really standing no chance against the man he ran for 113 yards last week against a tougher defense in the Colts. With A.J. Brown injured this also leaves fewer elite targets for Tannehill to throw the football to. Could he and Julio Jones connect for some big plays? Sure, but I like other options here this week.

Kyler Murray, ARI – We just saw Tom Brady and the Buccaneers offense go into Los Angeles and for the most part struggle against this Rams defense, being held to just seven points in the first half before collecting some late garbage time yards and points to pad the stats in the second half. With DeAndre Hopkins playing but not at 100-percent it feels like a tough spot to trust Murray, even with how good he has been this season.