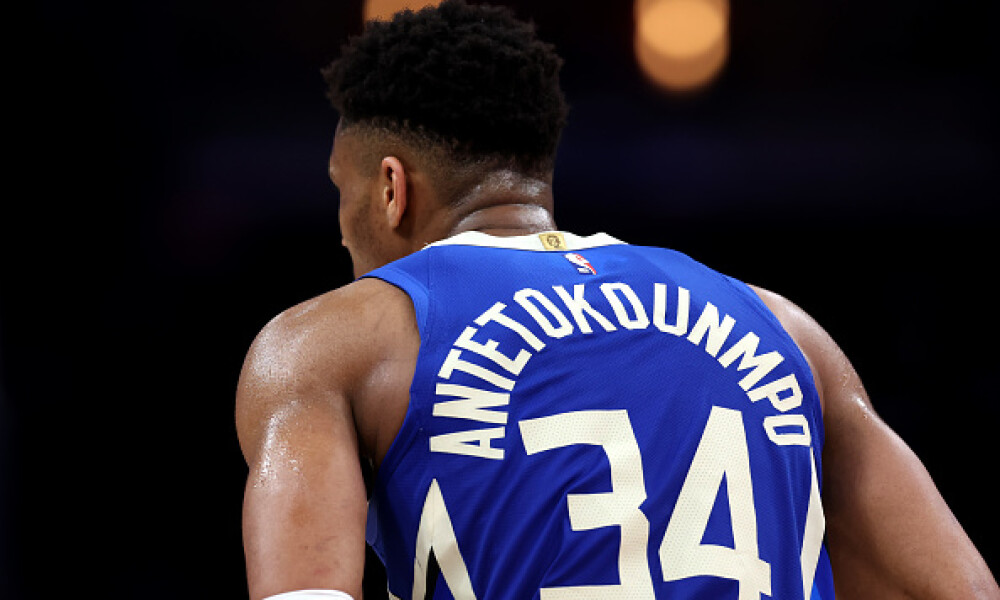 We have Game 4 of the Eastern Conference matchup between the Boston Celtics and Milwaukee Bucks and Game 4 of the Western Conference matchup between the Memphis Grizzlies and Golden State Warriors on tonight's slate. The biggest news of the night is the fact that Ja Morant is not going to be playing for the Grizzlies due to a knee injury. Memphis is down 2-1 to Golden State and Morant has been their best player by far in this series. Make sure to check out the NBA DFS lineups page and the NBA DFS player projections before plugging your lineups into the NBA lineup generator for tonight's DraftKings, FanDuel and Yahoo slate.

Game 3 was an absolute disaster for Jayson Tatum, scoring just 10 points on 4-of-19 shooting. This followed up his Game 2 performance where he scored 29 points on 10-of-20 shooting while knocking down five three-pointers. I do not expect Tatum to have another bad shooting night here in Game 4 in what is close to a must-win for Boston. I think he will be a rather contrarian play on this slate given the price and the poor shooting performance.

The complete opposite of Jayson Tatum in Game 3 was Jaylen Brown's performance as the Celtics guard finished with 27 points on 8-of-16 shooting. Not only did he have 27 points he also pulled down 12 rebounds and had four assists. In Game 2, Brown was lights out as well, scoring 30 points on 11-of-18 shooting. The Bucks seem more focused on stopping Tatum and this has allowed more favorable matchups for Brown to take advantage of. Given how he is going I think we gotta ride out Brown right now.

Al Horford has notched a double-double in all three games in this series and has returned at least 6x return in all three games based off tonight's price point. In Game 3 he was a monster, finishing with 22 points while pulling down 16 rebounds with five assists and two blocks. While it is unlikely that we get another ceiling game from Horford here in Game 4, I do think we get another double-double.

Grant Williams is now moving into the starting lineup after news came down that Robert Williams will not play tonight due to a sore knee. Robert Williams missed the first few games of the Celtics series against the Nets as he recovered from knee surgery and apparently that knee is causing some issues tonight. Williams has already been playing 30 minutes off the bench for Boston so not much changes here.

If looking for a dart-throw play tonight then maybe Theis is your guy. He likely plays 20-minutes off the bench with the potential for more given the potential for foul trouble when trying to defend the likes of Giannis Antetokounmpo. Theis can stretch the floor a little bit while also providing solid defense and rebounding. He had a few good game early in the Celtics series against the Nets before Robert Williams came back into the lineup.

The best player on the floor in Game 3 was Giannis Antetokounmpo as the Bucks star finished with 42 points, 12 rebounds, eight assists, two blocks and two steals. Giannis is averaging 64 fantasy points per game in this series as the Celtics really don't have too much of an answer for stopping him and are seemingly willing to let him get his numbers while focusing on stopping the secondary players.

Jrue Holiday has killed the Celtics in both Game 1 and Game 3, scoring 25 points in both while going for 46 and 50 fantasy points. In Game 2 he struggled as the Celtics defense was playing a bit more aggressively. What happens in Game 4 is really anyone's guess. I think the Celtics will defend him a bit tougher here as they focus on stopping the secondary players on the Bucks team from beating them but I still think Holiday has to be a core play tonight given his upside.

Brook Lopez put forth his best game of the series in Game 3 and it may have helped that the Bucks opted to start Grayson Allen instead of Bobby Portis in this game. Portis is someone that is a bit more aggressive on the glass and in the paint on defense. Lopez instead played 33 minutes and finished with a double-double. If the Bucks put out the same starting lineup I have some interest here. If Portis starts then I would look in his direction instead.

With the Celtics now done Robert Williams tonight it makes sense that Daniel Theis could see 20+ minutes off the bench for Boston. Theis has the abiltiy to space the floor and hit the occasional three-point shot while providing decent rebounding and some rim protection. He is also very prone to committing fouls which may also limit his consistent floor time here tonight but if you are looking for a min-price dart throw this could be it. Theis had some good games against the Nets last series before Williams returned for Boston.

This is a massive game for Desmond Bane here tonight with all reports leading to Ja Morant being ruled out for Game 4 due to his knee injury the offensive onus should be put Bane and a returning Dillon Brooks. Bane has had an awful series to this point, averaging just 10 points per game and that is only because he scored 16 points in Game 3. Now, most of the offense was running through Ja Morant and with Morant out there should be plenty more opportunities for the ball to be in his hands. This is going to be a really tough spot for Bane but Memphis needs him to step up.

After being suspended for Game 3 of the series we see Brook return to the lineup tonight. Brooks had a horrid Game 1, shooting just 3-of-13 from the floor for eight points and then found himself ejected just three minutes into Game 2 which lead to his Game 3 suspension. He returns to the lineup with a chip on his shoulder and the Grizzlies in need of a pick-me-up with Ja Morant not likely to play. Like Bane, Brooks will have a tough matchup ahead of him with the Warriors having strong perimeter defenders in Klay Thompson and Andrew Wiggins.

Can Jaren Jackson Jr. stay out of foul trouble long enough to make an impact on tonight's game? He has the size an the athleticism to be a problem on both ends of the floor for the Warriors and he dominated them in Game 1, scoring 33 points with 10 rebounds. He then fouled out of Game 2 and played just 29 minutes in Game 3 due to the blowout. With Ja Morant out, the Grizzlies could really use another Game 1 type of performance here tonight.

All season long we talked about wanting to see De'Anthony Melton get more playing time and in this series he has with varying levels of success. In Game 1 he finished with 33 fantasy points in 25 minutes and he hasn't had less than 20 fantasy points in any game this series. Melton has also played no less than 25 minutes in any game and with Morant out it would not shock me to see him reach the 30-minute mark.

With Ja Morant out of the lineup it is very possible we see Tyus Jones enter the starting lineup tonight. Jones played just 13 minutes in Game 3, 21 minutes in Game 2 and 12 minutes in Game 1 so he is part of the rotation. At his price point tonight he likely is popular.

As good as the Grizzlies played during the regular season without Ja Morant it feels like a tall test for them to be competitive in this playoff game against a fully loaded Golden State Warriors squad so it feels a bit risky given the blowout potential of this game to pay up for Stephen Curry but we did see him play 35 minutes in the Warriors 30 point blowout win in Game 3 and he went for 44 points so we know what he can do in a blowout situation.

The same sentiments I have about using Stephen Curry apply here with Klay Thompson as well. That said, like Curry, Thompson still played 35 minutes in Game 3 despite the blowout. If this game gets out of hand early I do think the Warriors will pull the plug on their starters knowing the playoffs are a marathon not a sprint but if I'm wrong then getting 35 minutes out of Thompson in this matchup is still a solid play.

Jordan Poole continues to have himself a breakout season that has extended into the Warriors playoff run. Poole is averaging 26.0 points, 5.0 rebounds and 5.3 assists in this series against Memphis and played 31 minutes while scoring 27 points in the Warriors Game 3 blowout win.

Maybe the forgotten man at times, Andrew Wiggins has played his role to perfection this series, averaging 16.7 points and 6.7 rebounds while playing strong defense on the Grizzlies wing scorers. Wiggins is never going to be the flashiest player on Golden State, but he is definitely a good DFS play at his price tonight.

Otto Porter has played at least 21 minutes in each of the three games this series and though Game 3 was the first time he scored more than four points in a game he is still filling up the stat sheet and giving fantasy managers nearly 20 fantasy points a night. If looking for a value play on Golden State tonight I think this is the play.

Fantasy Alarm is the home of expert MLB Fantasy content. We also bring you all of the best online sportsbook free bets & promo codes, and fantasy sports bonuses.