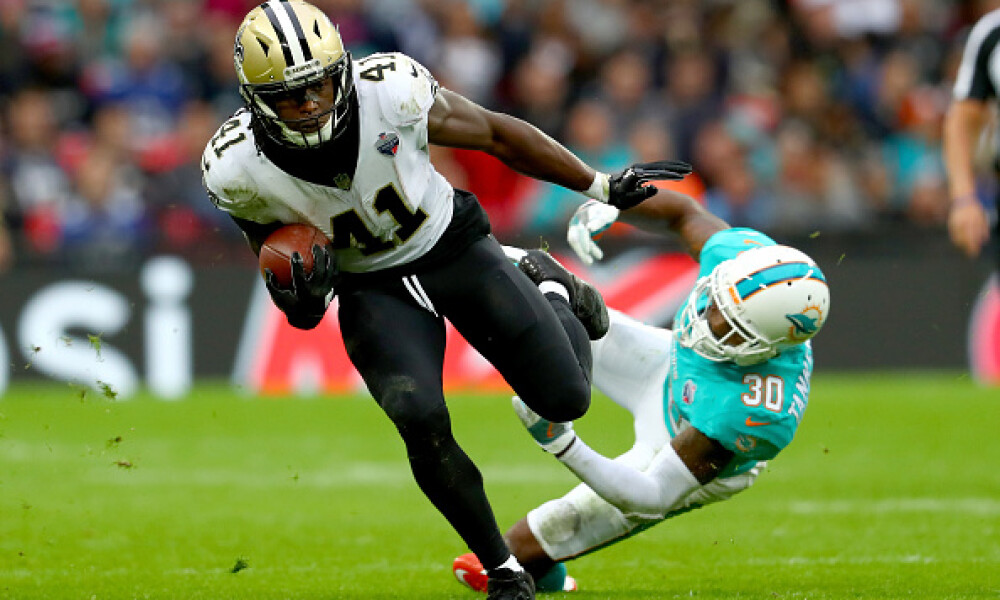 Derrick Henry, TEN – How much analysis is really needed here? He has at least 30 touches in back-to-back games and now he is facing the Jets. Kind of a no-brainer DFS play this week.

Alvin Kamara, NO – Kamara is coming off a nice 20.8 point outing against the Patriots, his highest output so far this season. He got a high volume total with 24 carries and three receptions on four targets. He has a strong matchup this week against the Giants, who currently rank as the second best matchup in the league for running backs. I expect Kamara to see a good number of touches once again this week and this matchup should allow for him to be very efficient with those touches and possibly find the end zone a time or two. He has a lot of upside and is one of the best spend-ups on the slate.

Antonio Gibson, WAS – Gibson is coming off a solid game, although it almost all came on one play, it still counts as he finished with 17.4 fantasy points. The big play was a 73 yard touchdown on a screen pass, but he also rushed 12 times for 31 yards. We still haven’t seen that big game on the ground from Gibson and he hasn’t found the end zone on a rush yet, but its coming. This week he gets his best matchup yet as he faces the Falcons and I expect Gibson to have a big game and get a lot of touches. I could see him finding the end zone not once, but twice in this one. Washington should do a better job of competing in this game after being blown out by the Bills last week.

Chuba Hubbard, CAR – Hubbard will draw the start in place of the injured CMC and while he won’t be CMC (no one is), he should be able to produce very well at this price tag. In relief of CMC (who had seven carries and two receptions before leaving) last week he was solid, rushing 11 times for 52 yards and hauling in three passes on five targets for another 27 yards. The Cowboys don’t currently rank as a great matchup for backs, but we should expect decent volume for Hubbard, both in the passing attack and on the ground, giving him a rock solid floor.

David Montgomery, CHI – Monty is coming off a down game, but he still had four targets and it wasn’t all his fault as Fields spend the whole game getting sacked and missing throws. The Bears offense should be better this week against the Lions and Monty could be in line for a big game. The Lions rank 26th in DVOA against the run and they are allowing nearly 115 yards on the ground per game. He should see plenty of volume on the ground (20+ carries would not surprise me in this one) along with a handful of passes thrown his way. I expect him to find the end zone in this game too. He has a mid-tier price and should be able to pay that off with ease.

Cordarrelle Patterson, ATL – If they want to keep under pricing Patterson, I’ll continue to have interest in Patterson. He has scored 23.9 and 16.2 points over the last two games while racking up seven targets in both games and at least five receptions in both. He also has had seven carries in all three games this season and topped 50+ receiving yards in the last two. This matchup with the Football Team isn’t the best, but at this low of a price, it won’t take much for him to pay it off, especially given how much work he is getting as a receiver. I will take my chances on him once again as it seems like he is a lock for a nice floor at this point and if he finds the end zone and/or breaks off a big play, even better.

Saquon Barkley, NYG – Barkley really just hasn’t looked that good this year. He’s been very inefficient and the Giants oline is in shambles. Sure, he scored 21.4 points in his last game but that was a nice matchup with the Falcons and he needed a touchdown and six receptions to get there. This matchup with the Saints is on the other end of the spectrum and Barkley is still being priced like a high-end back but there’s so many better plays than him and at cheaper prices, so if I am going to spend up, it’s certainly not for Barkley. I don’t see the Giants offense being very strong in this game in general and Barkley will likely look like a shell of his former self once again.