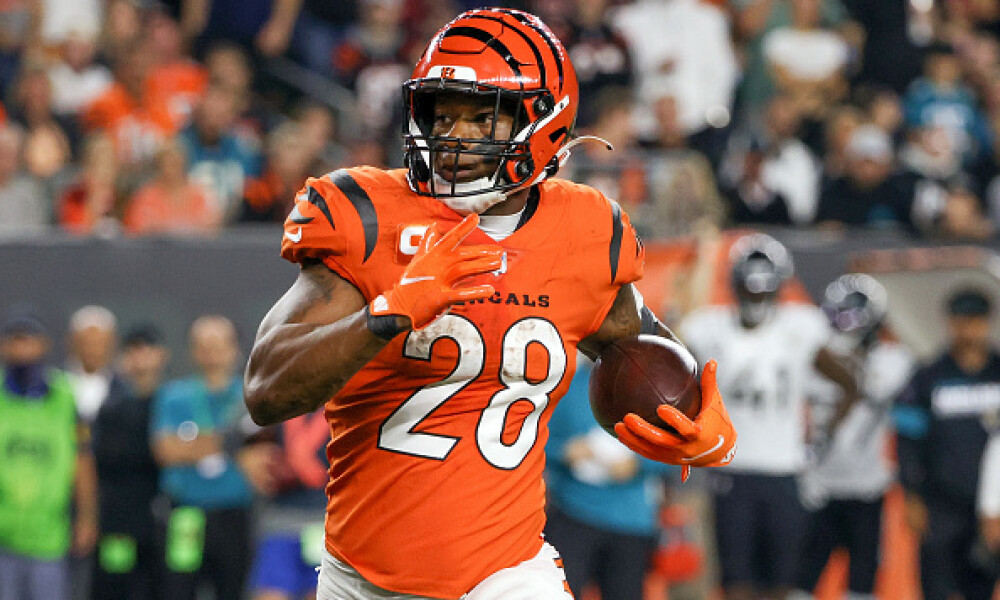 Joe Mixon, CIN – Mixon played well last week, but his fantasy point total got capped a bit by the blowout win (and the fact that he had zero receptions for the first time this season), which is a bit scary this week… seeing as how this could be a similar outcome. However, the Jets rank as the best matchup in all of football for running backs. He isn’t crazy expensive by any means, which makes me feel better about this play in general. He is averaging over 5.0 yards per carry over the last two weeks and if he gets at least 15 touches in this game (which he should get), I can see him having a strong day.

James Robinson, JAX – J-rob has been ballin’ over the past four weeks, scoring 25.4, 20.6, 24.7, and 19.1 fantasy points. He has racked up at least 15 carries, 70 rush yards, a rushing touchdown, and at least 19 touches in all four of those games. Not too shabby eh? He should be able to keep good times rolling too as the Jags take on the Seahawks; Seattle ranks as the second best matchup in the league for running backs and they are still without Wilson. I would be very surprised if Geno is able to carry Seattle to a blowout, which means game flow should work in Robinson’s favor once again as the Jags should be able to compete, if not win. No-brainer play at this price.

Leonard Fournette, TB – Fournette has a bad matchup this week with the Saints, but I am rolling with the hot hand here as he has scored 16.9, 21.0, 30.7, and 17.0 fantasy points over the last four weeks while racking up at least 81 rush yards in three of them and at least four targets in all of them while finding the end zone four times. The Saints will have to focus on stopping the Bucs passing attack (like everyone else tries to do), which should continue to allow for Fournette to continue to be productive. He is the guy and he gets the carries on goal line. Much like J-Rob, he’s still a bit underpriced, but I would go J-rob over him this week based on matchup; however, Fournette should be more contrarian.

Kenneth Gainwell, PHI – The Chalky McChalkerson play of the week (assuming Sanders is out, which seems likely). Gainwell racked up 15.1 fantasy points in last week’s game after sanders left with an ankle injury. He rushed five times for 20 yards and caught four of eight targets for 41 yards and a score. You love seeing that type of volume in the passing game and that was already his second game this season with eight targets. The Eagles take on the Lions this week, which ranks as the fourth best matchup for running backs this season, so there is so much to like with Gainwell this week and at an extremely cheap price. He will be heavily played this week in all formats (lock him in for cash games).

Brandon Bolden, NE – Bolden had just two carries for ZERO yards last week and yet he finished with 19.9 fantasy points as he caught six passes for 79 yards and a touchdown. He has stepped into the pass-catcher role for the Pats as he has reception totals of six, four, one, and six over the last four games. The Pats heavily use dump-offs passes as a key part of their offense, so you can expect him to be a factor in that way once again this week. The Chargers have struggled against running backs this season and I expect the Pats to lose this game, both of which bode well for Bolden this week. I would consider him a dart throw play this week.

Antonio Gibson, WAS – I was a Gibson believer coming into the year, but things have gone from bad to worse for him. He had a decent little stretch in week’s 3-5, scoring 17.4, 15.5, and 21.2 points, but he has scored just 5.4 and 7.6 over the last two weeks. His hairline shin fracture appears to really be hindering him as he averaging just 3.52 yards per carry over the past three weeks. He also hasn’t had more than three targets or two receptions in the passing game since Week 1, so if you add it all up, you have a very touchdown-dependent player right now. The price isn’t terrible, but his floor is clearly low and he hasn’t shown much of a ceiling either. Pass.