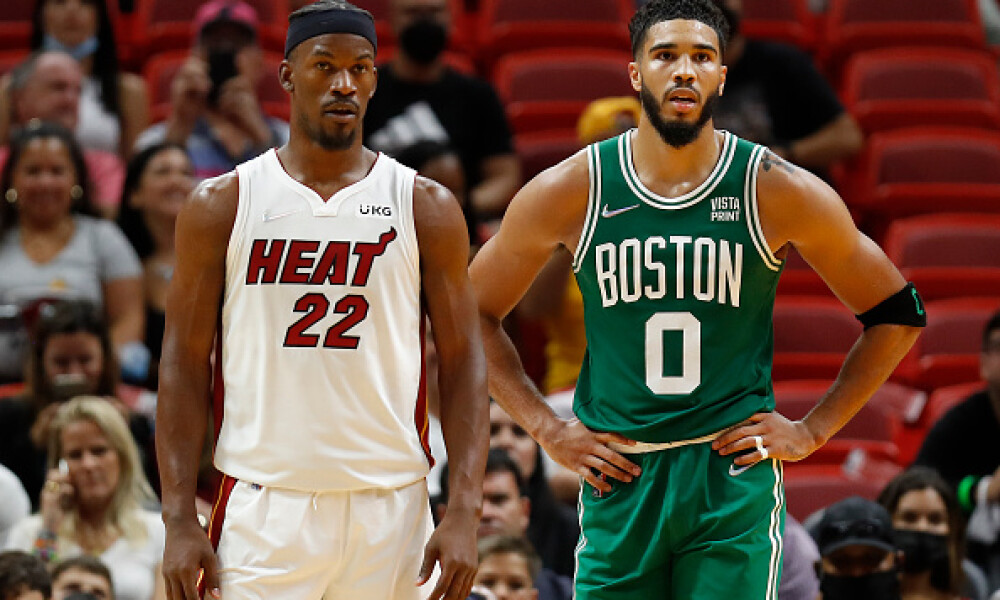 And then there were four. The 2022 NBA Playoffs really kick into high gear now, and tonight we begin the Eastern Conference finals matchup between the Boston Celtics and Miami Heat. Before building those NBA DFS showdown lineups, let's take a deeper dive into this Game 1 showdown. There are multiple names listed on the NBA injury report tonight, but there really are just two players to note – Marcus Smart and Kyle Lowry, with just the former being something to monitor. As we get closer to lineup lock, be sure to keep an eye on the NBA starting lineups to see if Smart does in fact take the court for Boston. Be sure to check out the NBA daily projections, NBA DFS lineup generator, and more of our daily fantasy basketball tools at DFS Alarm. With the Celtics and Heat beginning what we hope to be an exciting seven-game series in the NBA Playoffs, let’s take a look at some NBA daily fantasy picks.

*Please note that players not listed below are not necessarily a complete fade and any player listed can certainly be used as the MVP/Captain. These are merely suggestions for players to use when setting Showdown lineups.

Jimmy Butler really got rolling against Philadelphia on the offensive end, and I would look for that to continue tonight as the Heat will ultimately go as far as he does. He enters the series after averaging 27.5 points per game against Philadelphia along with 7.3 rebounds and 5.5 assists and this is the version of Butler that we didn’t see on a truly consistent basis during the regular season.

Let’s get the overwhelming theme of the series out of the way; defense. There will be a lot of defense from both teams tonight, and if you needed any proof of that, just take a gander at the over/under of 204. While Jayson Tatum is Boston’s best player, that will also be where the focus of Miami’s defensive attention will be tonight, so it’s only natural to have some concerns about him offensively. In his last five games, Tatum is averaging 28.6 points per game, so scoring isn’t an issue for him, and we also saw Tatum put up 46 points in Game 6 against Milwaukee. Over the same stretch, Tatum is averaging seven rebounds and 4.8 assists per game while shooting 43% from the field. Volume is going to be your friend here, but the highest-priced player on the night isn’t without risk.

The second option for Boston is a lot cheaper than Tatum, and while that is for good reason as the floor is lower, we are also working with a pretty good ceiling. Jaylen Brown is averaging 22.5 points so far this postseason and has been relatively consistent on the offensive end, but we can’t say the same about his playmaking despite averaging 4.5 assists per game. The volume should be there as Brown generally takes around 15 to 18 shots per game, and with 6.4 rebounds per game, he likely shouldn’t be a complete bust.

Al Horford has been huge for the Celtics this postseason, although in his last three games, he has only scored a combined 16 points. In that time, Horford has still finished with between 29 and 35 DK points thanks to a combined 28 rebounds and 15 assists. Prior to that, Horford scored a combined 52 days in his two previous games, so while things will be tough going against Bam Adebayo, the upside is there.

While Max Strus is listed on the Injury Report, I wouldn’t pay it too much attention as it has been an ongoing theme throughout the postseason. In the last two games against Philadelphia, Strus scored 19 and 20 points respectively, and I would expect him to have a similar role offensively tonight. The big question, though, is whether or not he will duplicate the 10.5 rebounds he averaged over those two games and you don’t want to get caught up chasing that.

Even though Bam Adebayo has gone five games without a double-double, the potential is always there for one. The issue really is that Adebayo simply hasn’t been consistently involved in the offense for Miami in the postseason but did flash 20-point upside against Philadelphia. While you’ll ultimately want some exposure to Adebayo, the price is on the higher side while dealing with a lack of consistent offense.

There is some doubt surrounding Marcus Smart’s status as he is dealing with a sprained foot, but the thought process is that he will continue to play through it as he did against Milwaukee. Smart came close to a triple-double in Game Seven with 11 points, 10 assists, and seven rebounds as he continues to play a well-rounded game for Boston.

With Kyle Lowry out tonight, Gabe Vincent should see 25 to 30 minutes of playing time once again, and that is the biggest thing we are after here. The assumption is that Vincent will find himself in the starting lineup once again, and his performance should line up to his averages of 9.8 points, 3.7 assists, and 3.3 rebounds per game which fits perfectly at this price.

It’s always nice to start things off with two or three blocked shots per game, and we also should be getting a healthy Robert Williams with no minutes restrictions after dealing with a knee injury against Milwaukee. Williams averaged 9.7 points and 9.3 rebounds per game in the regular season, and he should finish somewhere in the same neighborhood tonight.