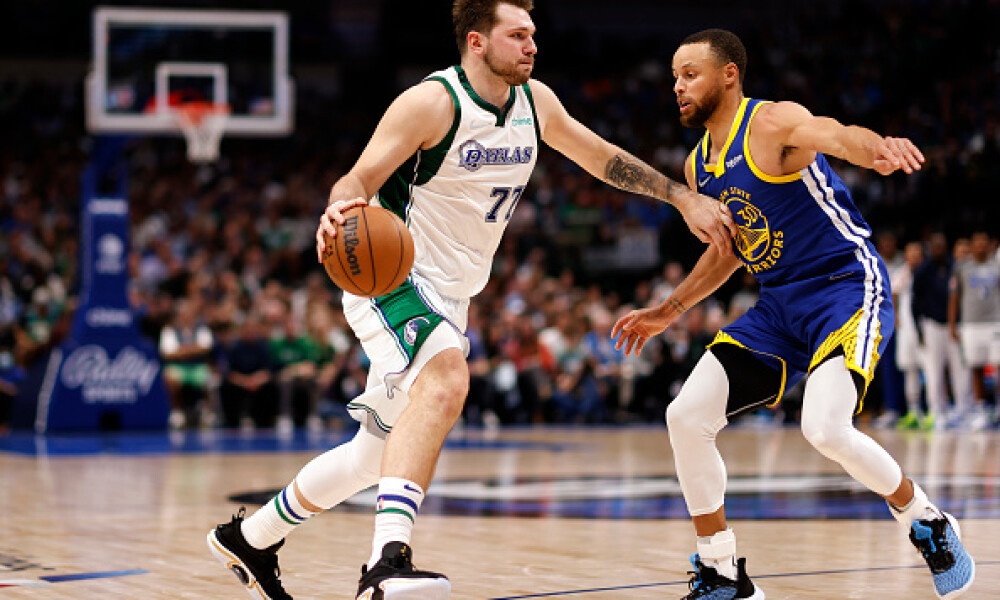 After an Eastern Conference Finals opening night with plenty of ups and downs, the attention now turns to the Bay Area for the Dallas Mavericks visiting the Golden State Warriors. Before building any NBA DFS showdown lineups, we should analyze how this game should flow, who are the key players, and who might be of some unexpected value despite tight playoff rotations.  Be sure to check out the NBA daily projections, NBA DFS lineup generator, and more of our daily fantasy basketball tools at DFS Alarm. With the Mavericks and Warriors beginning what should be a fast-paced, plenty-of-points series, let’s take a look at some possible NBA daily fantasy picks.

It almost seems like the MVP spot in Showdown contests was made for Luka Doncic. Yes, he is going to run you more than $20,000 on DraftKings, but he has more than 60 fantasy points in three of his last five games and no less than 50 fantasy points in a game since March 21st. In just 30 minutes in the clincher against Phoenix he still put up 61 fantasy points, an astounding two fantasy points per minute. He will get all the usage he can handle to make sure the Mavericks stay competitive in this game.

When Steph Curry gets hot, he can be every bit as effective as Doncic, and we know he loves to play in this home arena. In home games this season, Curry averaged 45.4 fantasy points in just 34 minutes per game. Except for the blowout in Memphis, Curry has been above that number of minutes in seven straight playoff games. In four games against the Mavericks this season, Curry averaged 42.6 fantasy points per game and comes in around a $4,000 discount from Doncic.

Jalen Brunson gets the last MVP recommendation tonight as he comes in $900 less than Klay Thompson on DK and has seen usage over 23% in six of his last seven games. Doncic, as expected, hogs a lot of the usage on the Mavericks, but the primary weapon when Doncic sits or when the ball is not in Doncic’s hands is Brunson. In addition, Brunson actually scored slightly more fantasy points on the road this year (31.1) than he does at home (30.5).

Unlike Brunson, Klay Thompson has a significant difference in home and road fantasy scoring, skewing towards the home side. In just 31 minutes per game at home, Thompson averaged 34.6 fantasy points, including a massive 51.5 points in the close-out game against Memphis. Thompson has put up more than 30 fantasy points in each of his last four home playoff games, so you know there is a safe floor here.

The clinching game against Memphis represented exactly how the Warriors want to use Draymond Green in these playoffs, and that is good news for fantasy managers. Green chipped in with 14 points, crashed the boards for 15 rebounds, and handed out eight assists. He got 46 fantasy points while only recording one steal or block. Take away a few points and add in a steal or two and this is the type of performance we can expect from Green in this ultra-fast-paced series. At 39 minutes last game, there are also zero lingering injury concerns here.

The last two games – both blowouts – don’t tell the whole story, but Dorian Finney-Smith plays absolutely massive minutes when the game is close, especially in the playoffs. In playoff games decided by less than 10 points, DFS plays an average of 42 minutes per night. He may now get a lot of points to come his way, but his contributions in rebounds, assists, and steals will help pay off the $6,800 salary tag on DraftKings.

Box-score watchers will look at Otto Porter’s 12 minutes in the last game he played without factoring in several things. First, he got hurt in that Game 5 against and the game was a massive blowout anyway. Second, in the four games prior to Game 5, he averaged 23 minutes and scored over 20 fantasy points in each contest. Porter is completely off the injury report in this Game 1 matchup and is too cheap in Showdown matchups on DK at just $4,600

Whether the Warriors go big again with Kevon Looney or they go small with Draymond Green at center, Maxi Kleber is going to be called upon to play a major defensive role in this game. Kleber has played more than 20 minutes in every playoff game except one and averaged 17 fantasy points per game against the Warriors this season. An added benefit to Kleber is he can bomb the three-ball if the Mavericks start getting behind in a big way on the road.

Here at Fantasy Alarm, we have the best NBA Playoffs coverage for all of your fantasy content and wagers. We also have the top online fantasy and sportsbook promo codes in your state. Check them out today.