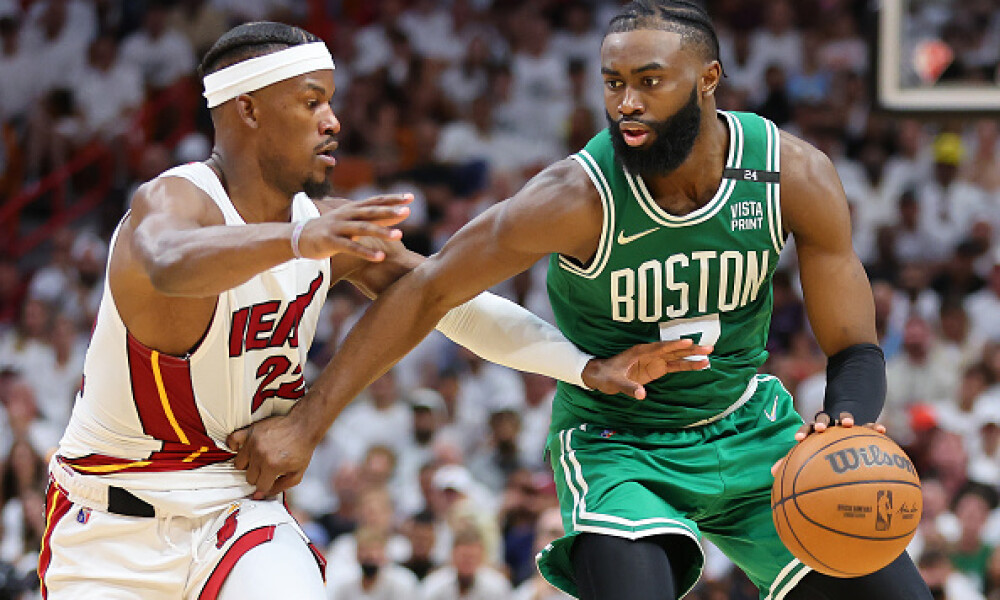 Welcome to another NBA DFS showdown slate with Game 2 of the NBA Eastern Conference Finals between the Boston Celtics and Miami Heat. Game 1 of this 2022 NBA Playoffs series saw a big swing in momentum between the first and second halves. The Celtics controlled most of the first half, outscoring the Heat in both the first and second quarters without Marcus Smart and Al Horford on the floor. Miami turned up its aggressiveness on both sides of the ball when the second half began, though, and outscored Boston 39-14 in the third quarter. Jimmy Butler scored 41 points and the Heat shot over 48 percent from the floor. Miami continues to be without the services of Kyle Lowry, who’s been dealing with an injured hamstring and has looked awful in the playoffs. Keep an eye on the NBA starting lineups before tipoff with a couple of other players on the NBA injury report. Before building your NBA daily fantasy lineups tonight, check out the NBA daily projections, NBA DFS lineup generator, and more of our daily fantasy basketball tools.

Both of these teams are excellent defensively and Miami is the slower-paced team on offense. Check out the NBA matchup report for more stats relating to both squads. The Heat were able to get to the basket a good amount last game and Boston could absolutely use more size and floor-stretching to contain Miami. Having Horford back should keep them a bit more in the game as well.  Now let's take a closer look at Game 2 between the Celtics and Heat. Here are a few players we can invest in for our DFS NBA lineups on FanDuel, DraftKings, and Yahoo.

Jimmy Butler is the heart and soul of the Heat. He’s committed on both sides of the ball and the Celtics didn’t have an answer for him as he took 19 shots and hit 63 percent of them. He’s always moving around to find an open spot and he’ll draw a lot of contact by ferociously attacking the rim. Butler took 18 free-throws last game and the Celtics will have to find ways to trap him early. Butler has been all over the glass in the playoffs pulling down eight or more boards in seven games in the postseason. Butler is coming off of a four-steal game and he’s produced multi-block outings in three of his last four contests. Unless it’s a blowout, and I’m expecting the Celtics keep this game close throughout it, Butler should play 40-plus minutes and take 20-25 shots. Bam Adebayo hasn’t been impactful or utilizing any kind of offense he possesses and this makes Butler an even safer play tonight.

Unlike Butler, a big part of Jayson Tatum’s offensive game is his ability to hit shots from beyond the arc and after being hot at the end of the last series versus the Milwaukee Bucks from downtown, Tatum cooled off hitting just two three-pointers of the nine field goals he took from long-range. Despite Boston disappearing in the second half of last game, Tatum still took 21 shots and scored 29 points and we should expect more of the same tonight. We should see him hit the 40-minute mark and he’s grabbed 8 or more rebounds in 3 of his last 5 outings and he’s swatted a shots in each of his last 4 games. Like Butler, Tatum also stole the ball four times. The one area that hinders Tatum’s production is his turnovers. He’s turned the ball over 14 times total in his last 2 contests and that’s why I lean Butler between the 2 players ultimately for the CPT/MVP spot, but with Marcus Smart expected to make his return tonight, Tatum can focus more on finding his openings in the Heat’s strong defense to make plays rather than focusing as much on ball-distribution.

After producing a double-double to start off the Eastern Conference Finals, Jaylen Brown should absolutely be considered for the CPT/MVP spot. Brown has taken no fewer than 16 shots in four straight games and after seeing him shoot 50 percent from the floor or better in two of his last three contests, we can expect production in two or three stat categories for DFS. Brown has grabbed eight or more boards in three of his last four battles and has stolen the ball in his last two outings. Even with Marcus Smart and Al Horford returning to action, Brown is going to have to slash more with the ball rather than hanging at the arc. We saw him take 10 free throws last game and because Miami is so good at avoiding screens on defense and they cover the arc with speed and agility, Brown will have to slice through the defense, get to the rim and draw contact potentially putting one of the Heat’s aggressive frontcourt defenders in foul trouble.

After he posted a usage rating over 31 percent in the first game of this series, the Heat are going to need Tyler Herro’s skilled three-point shooting and quickness to speed up the tempo for this game especially if Boston gets hot from beyond the arc. When Boston is hitting their threes, they’re a very hard team to stop and Miami’s game focuses more on getting to the basket rather than hanging at the arc. Even Herro saw more success scoring inside the arc off the bench. He hit just one three-pointer, but then hit six other shots closer to the basket and it was very encouraging seeing him take 15 shots and score 18 points to help propel the Heat. If Adebayo is going to be frozen out offensively because of the Celtics interior defense, they will need Herro to hit shots off the curl near the elbow. He should play over 30 minutes tonight in a more competitive game and we should continue seeing him take 14-18 shots throughout the series.  Herro has also posted steals in three of his last four games and grabbed at least eight rebounds in two of his last four battles.

With Al Horford back playing, does it necessarily crush Robert Williams' value and lower his ceiling? Not at all, P.J. Tucker will be all over Horford and we saw Williams make quick cuts to the basket and be the recipient of a good amount of ally-oops. Williams should still take six-to-eight shots tonight and after producing 18 points and 9 rebounds, the Celtics should design plays in which Horford draws out Tucker making him more of a decoy on offense and Williams should get force-fed in the low post. Tatum will constantly command double-teams and the other side of the paint should be open for Williams to work. His Knee didn’t look like it was bothering him last game and we should expect him to flirt with 30 minutes of action this evening. Dating back to before Williams was hurt, he’s recorded four straight multi-block games and he did a great job containing Adebayo and forcing him to pass off. Let’s also not forget that Williams swatted away 2.2 shots per game and he swiped just about 1 ball per contest. DFS players will be off of Williams with Horford back.

Even though Marcus Smart is very likely returning to action, Boston's backup point guard Derrick White will miss tonight’s game due to personal reasons. Just like Herro is a big-time difference-maker off the bench for Miami, the Celtics will need Payton Pritchard out there to change up the pace and he should get a decent amount of time bringing up the ball with the Celtics second unit. Pritchard should still log 20-25 minutes tonight and he’s even been helpful grabbing long rebounds pulling down five in both of his last two outings. We shouldn’t expect him to take 16 shots like last game, but he should take 7-10 field goals, and let’s not forget that he shot 40 percent from downtown and if the Celtics continue to commit more to shooting from long-range, Pritchard could find himself landing a few more shots.

Max Strus has been an excellent defender and he continues to start with Kyle Lowry out and not many of the other Heat players taking a lot of shots, Strus will be needed to hit them, especially from the outside. He took more three-pointers than any other Heat player last game and we should see him take double-digit shots tonight. He’s scored in double figures in three straight outings and he grabbed a few steals in game one. We should see Strus play 30-35 minutes tonight because of his strong perimeter defense. He hit double figures in scoring in multiple regular-season games against Boston. He did a great job guarding James Harden in the previous series and the Heat need him out there and even if his shots aren’t falling, his playing time is safe.

Miami has a pretty tight rotation and with Lowry still out, Gabe Vincent is in line for another 30-35 minutes of action. The reason Vincent is a dart throw tonight is that the reigning NBA Defensive Player Of The Year, Marcus Smart, is set to return and those that invest in Vincent are hoping that Smart needs a game or even half of a game to shake the rust or that Smart’s foot isn’t 100 percent and he’s playing through the pain. A mid-foot sprain could take a few weeks to heal up and it wouldn’t be surprising to see Smart a bit slower to start game two and Vincent can benefit from that. Besides scoring 17 points and taking 10 shots, Vincent also blocked three shots in Game 1 and he’s grabbed steals in three of his last five battles. If Smart is able to limit Vincent and freeze him out of taking many shots, we’ll look elsewhere when the series shifts to Boston for game three.