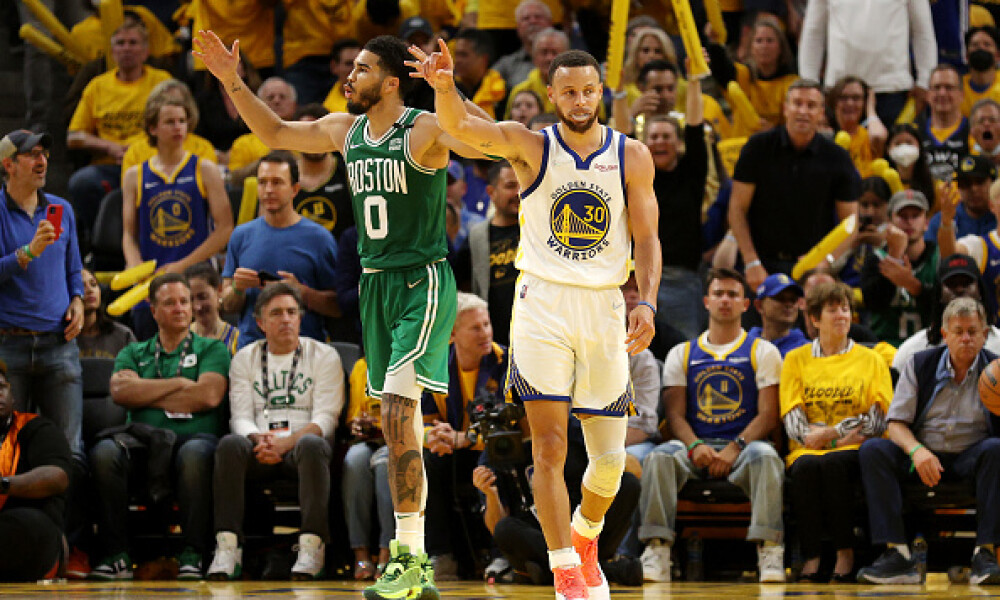 Just like the Boston Celtics did in the first game of the 2022 NBA Finals, the Golden State Warriors had an explosive 2nd half that bolstered them to victory to even the series as it shifts to Boston for tonight’s and Friday’s game. As expected the Celtics hot shooting cooled off and they got sloppy on offense. Golden State stole the ball 15 times and forced 18 Boston turnovers. The Warriors continue to get propelled by Stephen Curry’s offense as he dropped 29 points last game, but he did get more help from Kevon Looney and Jordan Poole. Gary Payton II being back will improve the Warriors defense. Robert Williams continues to be limited by his injured knee and can’t play a full workload. As the Celtics were being outscored 35-14 in the 3rd quarter, Williams couldn’t do much to help and only logged 14 minutes. The Celtics need all they can get from their staunch defensive big man to limit the number of times the Warriors drive the lane, but as of now as he remains questionable for this game, Williams's limited minutes are concerning and we have to stay clear of him in DFS. Here are tonight’s core plays for our DFS NBA lineups.

Going into the NBA Finals there was fear that Marcus Smart’s defense would be just too much for Stephen Curry, but Curry has turned away the doubters so far putting up 29-plus points in both games in this series and he’s shooting over 41 percent from beyond the arc. Curry has been able to get open and until Boston can get a good read on him, they will continue to get screened out. Curry is also attacking the basket showing his dynamism and that he’s not just going to sit at the arc and take threes. He’s able to work his way in the lane and when he’s off the ball, he’ll cut to the basket in certain plays. The Warriors could continue being very effective getting to the hoop if Draymond Green is pushing the ball up quickly and Curry runs right for the basket. More often than not, Curry will draw contact. Curry has also posted two three-steal games and pulled down five or more boards in both contests. He’s taken 46 shots this series and he’ll continue to have the eternal green light to shoot.

Expect Boston to be more protective of the ball and that includes Jayson Tatum who has possession of the ball a good amount. Tatum committed four turnovers last game and was just not as crisp of a passer as we had seen in recent games. Tatum was very efficient from downtown hitting six of nine treys, but shot just 42 percent from the field overall while still scoring 28 points. Tatum had a miserable shooting game to start the series but was smart to start passing off more and he dropped 13 dimes in that battle. Tatum has grabbed steals in each of his last four games and we should see him take 18-22 shots this evening. The Warriors have done a good job switching on Tatum to keep him from getting to the basket, but he can’t be frozen out of the zone, and Boston through more efficient passing will help find him better spots. He hasn’t been crashing the boards as much and when he does, the Warriors have been right there to box him out and tonight we’ll need to see a more physical Tatum especially if Williams is as limited as we think he’s going to be.

There will be a lot more DFS players invested in Curry and Tatum for tonight’s game but the shot volume continues to be there for Jaylen Brown and being that the Celtics are favored and we don’t think there will be a second-half blowout, Brown should play 35-40 minutes and take at least 20 shots tonight. He took 23 in the 1st game of this series and scored 24 points. He’s coming off of his worst shooting performance in weeks, but he’ll continue to get fed plenty. He’s taken eight or more shots from beyond the arc in both contests. Brown has been consistently grabbing at least six boards. He’s accomplished this in each of his last four games and has had past success pulling down a good amount of boards against the Warriors during the regular season. He’s a reliable rebounder and he’s been a tad helpful with ball distribution. Klay Thompson is very scoring dependent while Brown helps in multiple areas on the stat sheet.

There’s no other way to put it other than the Celtics guards have to keep the ball moving and attack the rim at all costs. Marcus Smart will be looking to drive and dish but is perfectly capable of doing so even with Gary Payton II back on the floor. We should see Smart take double-digit shots tonight and dish at least five dimes. Smart has to keep his turnovers down as he did in the first game. He turned the ball over five times last game. He’s grabbed steals in four straight games and he’ll also help grab long rebounds. Smart had a very strong shooting game in game one and he can definitely bounce back because he has more time with the ball than Al Horford, that ultimately was the deciding factor. If Robert Williams can move a bit quicker up and down the court it’ll also raise Smart’s assist-ceiling because he can feed Williams alley-oops on transition.

Andrew Wiggins continues to log heavy minutes and he’s taken 12 or more shots in both games in the Finals. The Warriors have enough three-point shooters and Wiggins continues to take the majority of his shots from mid-range and when he does shoot from beyond the arc, it’s normally after a play is broken. He’s hit two three-pointers in both outings in this series. He shot better in game one hitting over 53 percent of his shots and scoring 20 points. Wiggins has also been reliable grabbing rebounds and pulling down at least five in both contests. With this game expected to be closer, we’ll see his minutes rise and he should play 35-40 minutes. We should see him take around 15 shots as we did in the first game of the finals. Wiggins has been driving but hasn’t gone hard to the rim as we’ve seen in highlights. The more physical he plays in the paint, the more times we’ll see him go to the free-throw line.

When the Warriors are shooting well from the field and their opponent goes cold, Draymond Green can solely focus on defense. Also, Kevon Looney’s success getting to the basket earlier last game also was a reason Green’s shot total was limited. Green is as physical of a player as you can ask for. He still shot seven free throws last game. Green has been helpful doing all of the dirty work for the Warriors and he’s posted steals in both games in this series and he’s produced a total of 16 rebounds and 12 assists. We should expect him to keep hurrying the ball up the floor to keep the Celtics on their toes and not allow them to get set up on defense. We should see Green grab a few more boards tonight thinking that this game will be very physical. Green and Celtics players were getting heated last game, but Green is aware enough not to take it too far to the point in which he gets thrown out of the game. He should play 35-40 minutes tonight. With Williams ailing for the Celtics, Golden State should look to feed Green more right under the basket when he cuts.

The shots have been there for him and he’s hit the 30-minute mark in both games in this series. Derrick White has taken 11 or more shots in both contests and he’s been reliable in shooting from the outside hitting at least 50 percent of his long-range shots. White has scored in double figures in four of his last five battles. White has also been very aggressive on defense throughout the playoffs and he stood out and filled the void when Marcus Smart was hurt. White has blocked a shot in seven of his last eight battles and nearly averaged a steal per game for the season. Despite his poor shooting last game, he made up for it in other areas such as producing four boards. He’s actually grabbed three or more rebounds in three of his last four games. White Should play around 25 minutes tonight and if the Celtics are cold shooting from the floor, they’ll rely a bit more on him since he’s hit multiple three-pointers in four straight games.

It was very encouraging seeing Gary Payton II play 25 minutes off the bench in his first game back on the floor in over a month and seeing the defensive impact he’s made throughout the year when healthy, we should expect him to hit the 20-minute mark once again. This DFS play is as much of a dart throw as you’re going t get. Payton earns all of his minutes because of his defense and mainly received his minutes because the Warriors were very much out in front. If Boston is once again hot shooting from the floor like they were in the first game of this series, Steve Kerr could send Payton in to try to rattle the Celtics and keep the guards from getting high-percentage shots on the perimeter.

Dominate your NBA DFS Showdown contests today using our Player Projections that you can use specifically for Showdown!