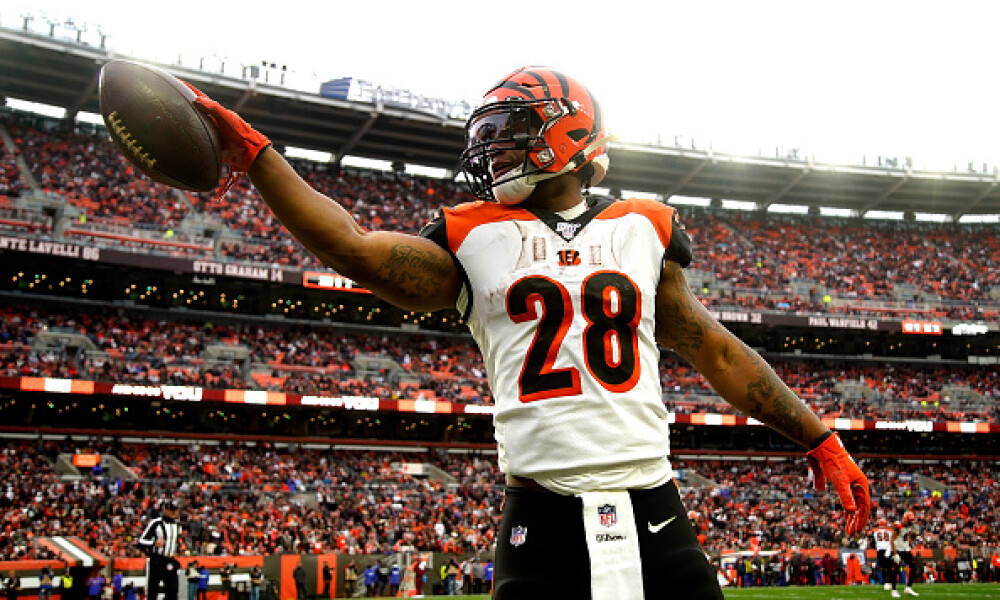 I don’t know about all of you, but I’m still riding this incredible high from #Family member Millionaire Mike’s huge DFS win in Week 3. I’m not sitting here with pipe dreams of suddenly taking down this NFL Week 4 Showdown Slate, but I am certainly inspired to really dig into the match-up between the Jaguars and Bengals and hopefully steer you all in the right direction. We’ve got a surging Bengals team hosting a struggling Jaguars team, but it’s not like this is going to be a lopsided game as both defenses have their shortcomings and this game could end up tighter than this 7.5-point spread indicates. But we’ll worry about that when we make our picks for Wager Alarm. Today we focus on DFS Showdowns!

Weather: Mostly cloudy with temperatures in the mid-to-high 60s; no wind or precipitation

Joe Mixon, RB CIN – Expect Mixon to be a popular play in the top spot for this game as he continues to see the volume a running back needs to be consistently successful in fantasy. The potential game script indicates another strong effort from him as we expect the Bengals to establish the ground game early, let the passing game open up and, once a strong lead is established, run the ball heavy to chew up the clock. Jacksonville has allowed an average of 115.7 rushing yards per game with five rushing touchdowns, so if Mixon can grab a full share of that, he works well here.

Ja’Marr Chase, WR CIN – Let the world scream “touchdown regression” all they want. For now, we’re going to ride the Chase wave until it breaks. The Bengals haven’t been forced to air it out this season as much as they have in the past, so the 16 targets for Chase aren’t huge. But he is routinely the first-look for Joe Burrow and their connection has led to four touchdowns in three games. The Jaguars secondary has struggled in coverage and they sit 28th in DVOA against opposing No. 1 receivers, allowing an average of 98.9 yards per game to them.

Trevor Lawrence, QB JAC – It’s the contrarian play as the expected flow of the game puts Lawrence in a pass-heavy scheme while the Bengals try to kill the clock on them. The turnovers have been brutal and his passing yards have been sub-par over the last two games. But this Bengals secondary is still having its issues right now. While they are getting Trae Waynes back, they are expected to be without cornerback Chidobe Awuzie and free safety Jessie Bates. We won’t hold our breath for no interceptions, but a heavy passing attack can bring up the yardage total and maybe land a few touchdowns.

Joe Burrow, QB CIN – From a normal fantasy standpoint, Burrow has been decent. Not great as that three-pick game in Week 2 was awful, but his seven touchdown passes have been welcome. Right now, it’s about game flow and the expectation here is that Burrow doesn’t need to be throwing the ball much, especially if the Bengals have a good lead and can kill the clock with the ground game. But given his weaponry and the weakness of the Jaguars pass defense, it isn’t unrealistic to expect 250 yards and a couple of touchdown passes here. Not what you want for the captain spot, but string enough to keep in your lineup.

Tyler Boyd, WR CIN – You can either consider him as the pivot off Chase due to budgetary constraints or you can use him as a complement and stack those Bengals wideouts. The Jaguars pass defense is certainly weak enough to sustain yads and scores for the Bengals top two wideouts. He remains a reliable asset for Burrow and his 19 targets through the first three games indicate the quarterback’s trust in his abilities, particularly on third down when they need to move the chains. With Tee Higgins out, Boyd continues to shine in his increased usage.

Marvin Jones, WR JAC – While it’s been almost six years since Jones played for the Bengals, we still love to point out the revenge-game narrative, don’t we? I’m not sure there’s much revenge to exact, but the Bengals were the team that drafted Jones and maybe that does have some lingering meaning. But the truth of the matter is that Jones is the most-targeted receiver in this offense and while he may play a secondary role to D.J. Chark, his 28 targets and two touchdowns speak volumes. Lawrence has learned to lean heavily on the seasoned veteran and the two should be able to connect again tonight.

D.J. Chark, WR JAC – He’s likely to be more of a contrarian pick tonight due to the fact that Trae Waynes is returning and the two will likely square off on a regular basis. But as good as Waynes is in coverage, he is coming off a hamstring injury and this is going to be his fist game-action of the 2021 season. He’s a talented wideout with good speed to stretch the field, so expect the Jaguars to test the coverage and take some shots downfield early.

James Robinson, RB JAC – Is Urban Meyer finally learning to lean a little more on the run? Robinson has seen his carries steadily increase over the first three weeks with last week against Arizona culminating with a season-high 15 carries and his first touchdown. Not that Robinson is of similar caliber to Ezekiel Elliott, but we have seen Meyer go with a run-heavy scheme back at Ohio State when he had the current Cowboys back in Columbus. If the Jags want to keep this game close, they’re going to have to win the time of possession battle and that means lead with the run. If their defense fails to hold, though, this could be a short night for the Jaguars running back.

Bengals D/ST – The Jaguars lead the league in giveaways with seven interceptions and two fumbles and no one sees this trend being halted anytime soon. Lawrence is a pick-machine and will continue to make the usual rookie mistakes, so look for the Bengals to do a lot of ball-hawking and focus on winning the turnover battle. To save some salary, it would be a crime not to use them.

Laviska Shenault, WR JAC – The belief was that, without Travis Etienne, Shenault would see an increase in snaps and targets, particularly out of the slot. The 21 targets he’s seen look great on paper, but the average depth of target (aDOT) is weak and he’s not exactly doing much after the catch. The Bengals do cover the slot receiver fairly well, but they have allowed an average of 66.9 receiving yards per game, so if you’re setting multiple lineups, he could be an intriguing dart-throw.

C.J. Uzomah, TE CIN – The Jaguars rank 22nd in DVOA against the tight end and have allowed an average of 55.7 yards per game which has translated into 12.3 fantasy points per game. Uzomah doesn’t see much in the way of targets, but we’ve seen him get the red zone looks in the past. If the Bengals are inside the 20 and the Jaguars leave the middle of the field open, Uzomah could be doing a little touchdown dancing.

Matthew Wright, K JAC – Who knows what is going on behind the scenes, but apparently there is a personal reason for Josh Lambo’s absence this week. Not that that Jaguars are complaining as Lambo has missed all three of his field goal attempts as well as two extra-points. Wright saw limited action with the Steelers last years and went 4-for-4 on field goals and 7-for-7 on extra-points. If the Jags offense stalls, perhaps Wright gets a few kicks this week.