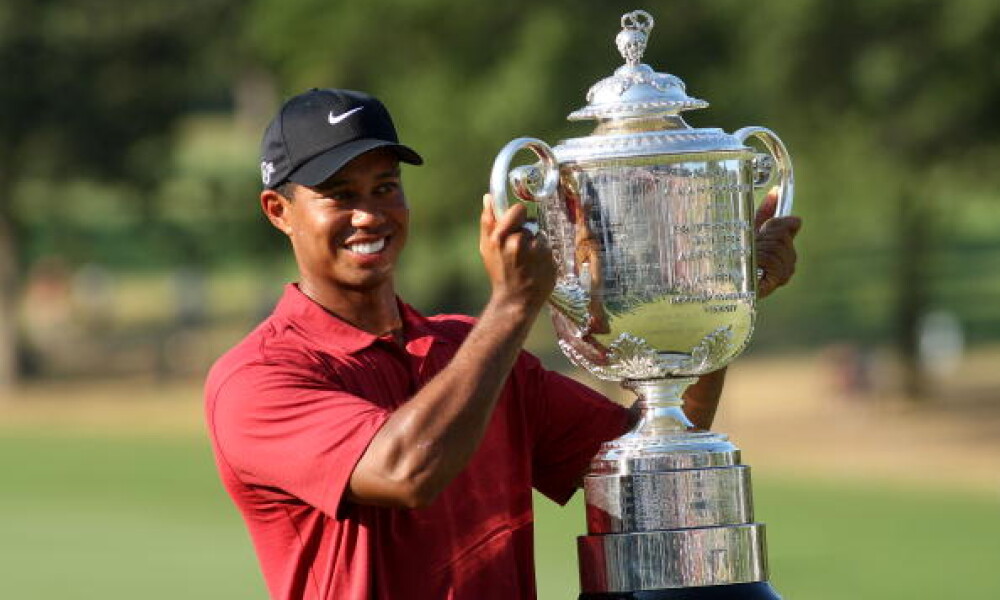 First of all, thanks to Dan Malin for doing an absolutely fantastic job filling in for me last week.  He knocked it out of the park with his first attempt at the PGA Playbook and I appreciate the hard work.  I, on the other hand, got a much needed break with my family to a tropical island.  After a week filled with fruity umbrella drinks, I’m back in time for the PGA Championship, it’s almost like I planned it that way.

We head to Tulsa, Oklahoma for the 104th PGA Championship at Southern Hills Country Club.  This is the second major championship of the 2021-2022 season and features 156 PGA Tour players and club professionals from across the country competing for the Wanamaker Trophy.  Fun fact, did you know that the Wanamaker weighs nearly 30 pounds?  No wonder Colin Morikawa almost dropped after his 2020 title.

Southern Hills was built in 1936 and has played host to seven major championships; three U.S. Opens and four PGA Championships.  It was the site of Tiger Woods’ 13th major victory, the 2007 PGA Championship at the prime age of 32-years-old.  I don’t think anyone thought he’d only win two more majors over the next 15 years.  Southern Hills also hosted the 2001 U.S. Open which Tiger finished in a tie for 12th.  In those two major championships, only a combined nine players finished with scores under par.  These players will be tested and just as important as making birdies will be knowing when par is good enough.

The course went through a major overhaul in 2019 to prepare for this tournament.  It will play as a Par 70 and stretch out as far as 7,556 yards from the championship tees.  Augusta National is a very fair comparison course in that they both feature relatively wide fairways, small fast contoured greens (with sloped edges), right to leg doglegs, big elevation changes, and strategically placed bunkers.  I will key in on players that excel off-the-tee, approach, around the green/scrambling, bogey avoidance, putting and history in major championships.

Phil Mickelson has once again put himself in the spotlight as he will not defend his 2021 PGA Championship.  The 50-year-old stepped away from the game three month ago after his controversial comments about the Saudi Arabia-based Super Golf League.  He also withdrew from the Masters in April.  Let’s look past lefty and focus on Tiger Woods and a slew of fantastic golfers in this field.  We’ve got 19 of the Top 20 players in the world with Sungjae Im being the only missing player because of a positive COVID test.

We’ve got so many storylines from Scottie Scheffler looking to continue his historic run, Tiger Woods hunting for his 16th major, Rory McIlory trying to win his first major since 2014, Bryson DeChambeau’s health and so much more.  There are a hoard of fantastic young players looking to win their first major like Cameron Smith, Patrick Cantlay, Viktor Hovland, Xander Schauffele, Daniel Berger, Sam Burns, Joaquin Niemann, Matthew Fitzpatrick and Tony Finau.  The pairings were released for the Thursday and Friday rounds, man we’ve got some marquee groups.  I’ll keep my eye on the group of Tiger Woods, Rory McIlory, and Jordan Spieth, also Jon Rahm, Collin Morikawa, and Scottie Scheffler.

We will see temperatures in the high 80s and low 90s to begin the week but remember it’ll be more of a dry heat in the sooner state.  There looks to be rain in the forecast for Friday afternoon/evening which will cool things down for the players competing on the weekend.  While rain doesn’t look like it’ll have a big impact this weekend, the wind will.  Those midwestern winds will be in the mid-to-upper teens throughout the weekend.

Despite the PGA Championship being considered the worst of the four majors, it still brings a fantastic field of golfers competing on one of the best golf courses in the country.  The drama will be high especially if Tiger Woods makes the weekend.  We all want to see him competitive but I'd personally like to see one of these really good young players win their first and get that monkey off their back's.  Good luck this weekend!

ONE AND DONE PLAY: RORY MCILORY