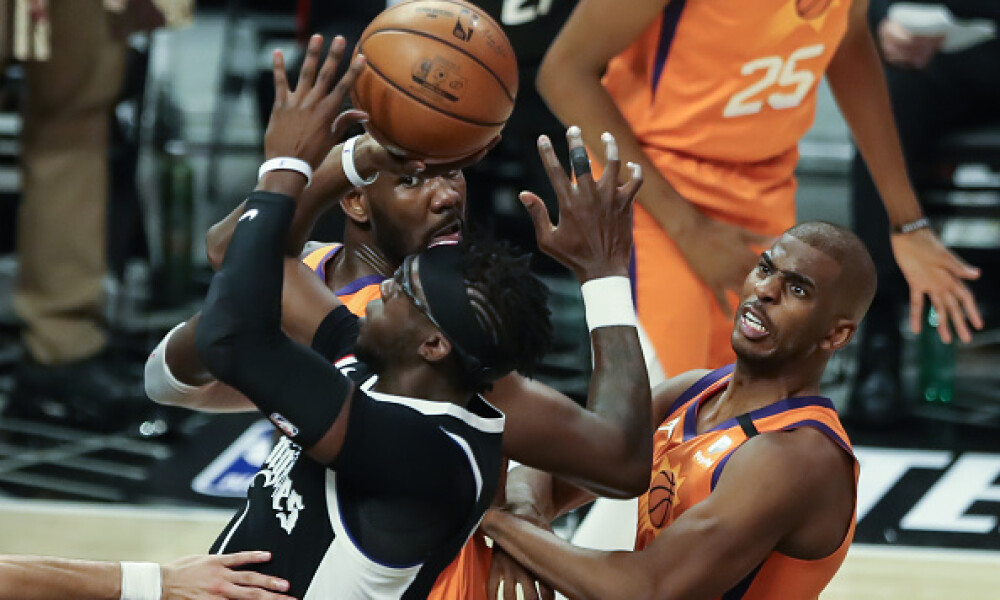 Despite the return of Chris Paul, the outcome of Thursday’s game was never really in doubt. Devin Booker struggled to find his shot and perhaps we finally have clarity surrounding the rotations and expected playing time in Los Angeles. At the very least we should have a more competitive game tonight in what might be the last time we see the Clippers take the court without Kawhi Leonard.

Paul George – What really stood out for George on Thursday was the impact he made on the boards as he grabbed 15 rebounds. Especially while Leonard is still sidelined, volume isn’t going to be an issue for George so at this point he is getting to his numbers in spite of his inefficiencies. Game Three saw George shoot nine of 26 from the field as he continues to struggle to find his shot, especially from downtown as he made just three of 11 shots, but thanks to going seven of eight from the line he still finished with 27 points. The eight assists were also a nice touch from George as a facilitator and we know that the Clippers’ offense will continue to revolve around him tonight.

Chris Paul – Let’s chalk this up to a little rust for Paul after missing the first two games of the series as he struggled to put up 15 points. With that being said it was a good sign that he was out there for 38 minutes as we clearly don’t have to worry about any minute restrictions. Paul did slide right back into his role leading Phoenix’s offense though as he handed out 12 assists. I would expect to see better of him tonight.

Devin Booker – With Paul returning I did have some doubts about Booker but ultimately his struggles and lackluster DFS performance should only be turned back to himself. When a player with Booker’s offensive ability takes 21 shots, you simply expect him to make more than five and finish with more than 15 points. Booker also turned the ball over four times, for an alarming 12 in the last two games, while picking up five rebounds and five assists. The good news it that we know the shots will be there again tonight and he can’t do much worse from an efficiency standpoint.

Ivica Zubac – Ignore him at your own peril. Much has been made about the lack of clarity surrounding playing time in Los Angeles so when Zubac played 34 minutes in Game Two, I did take it with a grain of salt since he had a combined 31 minutes in the three games prior. Zubac did put up a double-double on Tuesday (14 points and 11 rebounds) but I was still skeptical. I might be a game too late now but Zubac raised the bar even more with 15 points and 16 rebounds in Game Three. It’s not like there wasn’t an opportunity in the post for Zubac to grab control of, so he has my attention tonight as a more cost-effective option to fill that captain spot on DK.

Deandre Ayton – Ayton missed on a double-double by a rebound, but it’s hard to argue with 18 points and nine rebounds. The last three games could potentially be a coming out party for Ayton as he is becoming a little more involved offensively while still pounding the boards.

Reggie Jackson – At least from an offensive perspective, Jackson is helping to make the loss of Leonard go down slightly better. He is now working on a streak of five straight games of at least 33 FD points after putting up 23 points on Thursday. Jackson will continue to be heavily involved in the Clippers’ offense tonight and he is becoming a nice, dependable option although it would be nice if he did more than just score.

Mikal Bridges – Bridges is never going to be someone that I force into my lineup, especially when he isn’t exactly a bargain, but if he fits you know what you are going to get. On Thursday that was 13 points and six rebounds which is generally the neighborhood we see Bridges live in on a pretty regular basis.

Jae Crowder – Crowder is one of those players who is often more valuable to their team than your DFS squad but his price has come down over the last two games. On Thursday, the forward put up nine points and six rebounds in 28 minutes of play in the second straight game in which he failed to distinguish himself. Previously Crowder was doing enough to break the 20-fantasy point mark with ease so I wouldn’t give up too easily and with the decreased price, it might be a value opportunity as you fill out your roster.

Cameron Payne – Despite leaving after four minutes with an ankle injury in Game Three, there doesn’t appear to be any limitations on Payne tonight. He will drop down to a secondary role with Paul back but that still means he will be the first guard off the bench for Phoenix. Paul and Booker are going to command the majority of the playing time, but there should be room for 15 to 20 minutes of run for Payne and he has shown the ability to score off the bench and also to be a facilitator.

Terance Mann – Mann bounced back to 32 minutes of playing time on Thursday and while the scoring didn’t directly follow suit, 12 points and five rebounds isn’t a terrible line. We are in the dart throwing section of things, and Mann fits perfectly here as we know that the offensive upside is there, but we likely won’t see him score 39 points again this postseason.

Cameron Johnson – Johnson played a series high of 30 minutes in Game Three, and for the third straight time he hit double figures in scoring with 12 points and five rebounds. A floor of around 20 fantasy points at this price works well.

Patrick Beverley – For whatever reason Beverely isn’t often someone I think about from DFS perspective. But when forming lineups, the guard often pops up on my radar based on his salary and the fact that he has played 26 minutes in three of his last four games. On Thursday that led to eight points and six rebounds on the way to 23 FD points which certainly works at the bottom of your lineup.