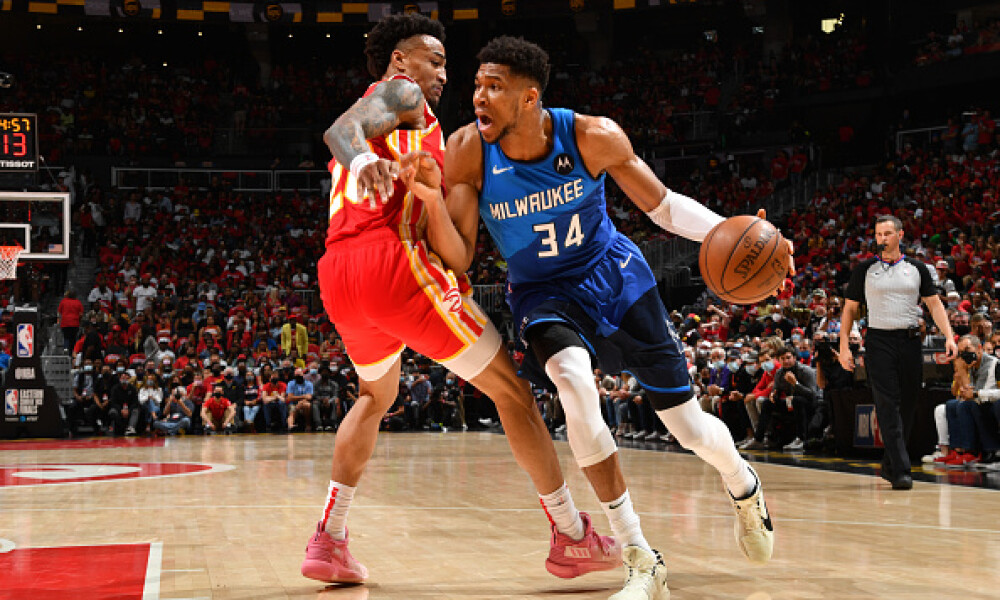 After dropping the first game of the series, Milwaukee dispatched the Hawks with relative ease to win the next two games. Things will be interesting tonight as Trae Young is clearly hobbled with a foot injury. The Atlanta superstar is listed as questionable, and it’s hard to believe he won’t take the court tonight, but he will be limited at best and the Hawks will have to find other ways to compensate as we keep an eye out for any crumb of news prior to lineup lock.

Giannis Antetokounmpo – While the forward is listed on the injury report, I wouldn’t pay it any attention as he certainly wasn’t limited in Game Three. Antetokounmpo hasn’t had many issues doing whatever he wants against Atlanta and he is coming off a 33-point, 11 rebound performance in 40 minutes of action. At this point Antetokounmpo is a lock for about 50 fantasy points and he has consistently shown upside to around 70. With Young limited at best, we are looking at the best (and most expensive) option on the slate.

Khris Middleton – If you are looking in another direction, then Antetokounmpo’s sidekick should be squarely on your radar. Middleton picked things up after the first two games of the Nets’ series and he has emerged as a true offensive threat. In the fourth quarter on Sunday the forward was all Milwaukee needed as he outscored the Hawks on his own in the fourth quarter with 20 points. Overall, Middleton put up 38 points on the night while adding 11 rebounds and seven assists for a complete effort. It was a nice bounce back performance after combining for 30 points in the first two games of the series and no one else offers this much upside.

Trae Young – I could be wrong, but Young did come back after injuring his foot on Sunday although he was limited, so my expectation is that he will be out there tonight. If Young doesn’t play, I’m not sure that Atlanta has a chance as he scored 35 points in 39 minutes in Game Three and it’s clear who the offense runs through. It is worth noting that Young didn’t have a rebound on Sunday and with only four assists, it’s hard to make much of a DFS impact. Unless we have real clarity and comfort surrounding Young’s status and health, I’m inclined to stay away here. At the same time, this could create a contrarian situation if you are throwing up multiple GPP entries.

Jrue Holiday – It was been quite the productive series for Holiday who kicked it off by scoring 33 points and followed that up with 22 points. Holiday has also been involved as a facilitator for Milwaukee with just under 10 assists per game. On Sunday, Holiday’s offense dropped down to just six points but Milwaukee also didn’t need much from him on the offensive end. Even with the lack of scoring, Holiday still put up 40 FD points as he continues to fill the stat sheet throughout this postseason (aside from the first two games against Brooklyn).

John Collins – With a limited Young someone needs to step up offensively for Atlanta and Collins might be in position to pick up some of the slack. The concern though is that Collins has only played a combined 47 minutes in the last two games (24 and 23, respectively) but he has reached double figures both times averaging 12 points and eight rebounds. That was on the heels of a 23-point, 15 rebound performance to kick off the series and Collins is very capable of hitting those numbers again.

Clint Capela – The issue with Capela is that he simply hasn’t been producing offensively (a common theme for Atlanta these days) with just 10 points in the last two games. After grabbing 19 rebounds in Game One, Capela has that total in the next two games combined as he has failed to truly stand out. In five of his last six games he has failed to hit the 30 FD point mark and I wouldn’t expect for that trend to change.

Kevin Huerter – As far as darts go, Huerter is on the expensive side but his performance has been too up and down to truly trust on a consistent basis. He will benefit from any type of limitations Young has but Huerter can stand on his own as he did have a 27-point game against Philadelphia in the second round. Huerter has consistently played more than 30 minutes per night but what stood out to me was his seven assists on Sunday and he has also been chipping on the boards as well.

Danilo Gallinari – Gallinari had his highest workload of the postseason playing 35 minutes on Sunday which led to 18 points and four rebounds. That is a typical outcome for the forward who has become one of the more consistent offensive threats for Atlanta but is also one-dimensional from a DFS perspective.

Bobby Portis – The forward consistently plays about 15 minutes and he has reached double figures twice in three games against Atlanta averaging 11.3 points and five rebounds per game. Portis gives us a good chance at least 20 fantasy points tonight and there is value in that predictability and offensive ability off the bench.

P.J. Tucker - Tucker continues to get a heavy workload thanks to his defensive, and playing time is half the battle here. The forward has only scored eight points in the first three games of the series but he is averaging just over seven rebounds per game along with a few assists which makes for a solid DFS value.

Lou Williams – We know that Williams has the ability to percolate quickly off the bench on the offensive end, but in three games against Atlanta he has a combined 13 points. This is a dart throw in the truest sense of the word as Williams is cheap and hasn’t shown much against the Bucks, but he has the most to gain if Young is truly limited or sidelined as he would vault up the depth chart.