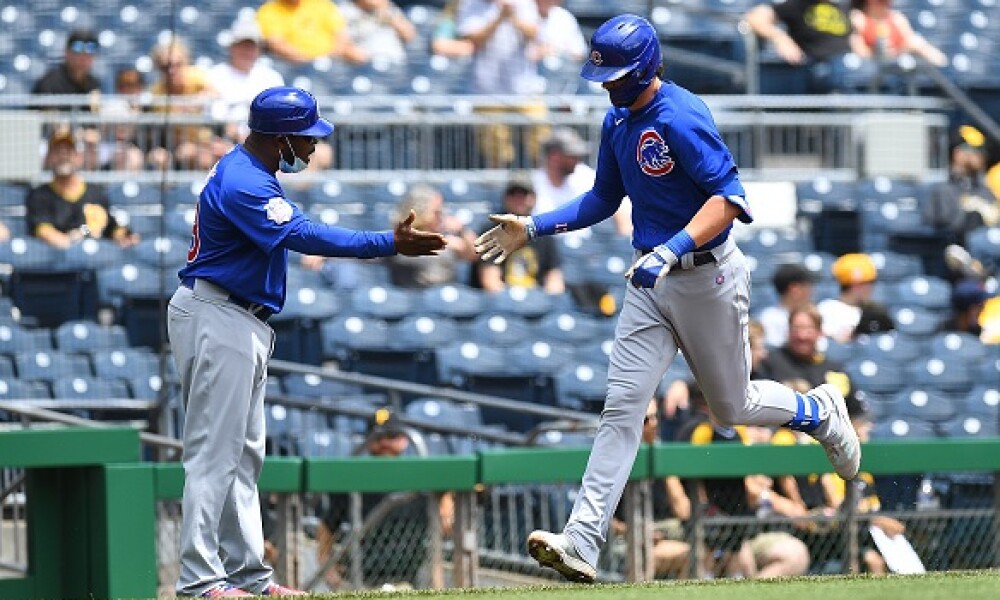 Kris Bryant, 1B/OF, CHI – He has been slumping a little of late, but we only have to worry about today, and signs are pointing to a good game for Bryant. He will face David Peterson of the Mets who has been pretty awful lately. Peterson has allowed nine runs in his last two starts that only last three innings combined! He has also given up three home runs in his last three starts. He is a lefty, which is great for Bryant who is hitting .404 against left-handed pitching this season. He also has a ridiculous 1.378 OPS against left-handers and is homering every eight at-bats against them. He also has been better on the road this year, hitting 50 points higher away from Wrigley with a .324 average. In his career he has hit a nice even .300 at Citi Field with six extra base hits in 15 starts. Bryant could be a key cog in your winning lineups tonight.

Nolan Arenado, 3B, STL – While he is not putting up the crazy numbers he did a few years ago, Arenado is still proving to be quite effective in St. Louis. He has three multi-hit games in the last week, with two doubles, a home run and eight RBI. He faces the Marlins’ Braxton Garrett tonight who has allowed ten runs in his 14.2 innings of Major League experience. His Minor League numbers weren’t exactly jumping off the page either. Arenado has been raking against lefties with a .359 average and 1.088 OPS. He is a great mistake hitter, and Garrett is sure to make some mistakes tonight. And when Garrett is taken out of the game, the Marlins bullpen is not even that great with an ERA near 4.00. This certainly looks like a night where the Cardinals will score some runs.

Nelson Cruz, OF, MIN – Whoaaaaa Nellie! Cruz has heated up again with five hits in the last four days and three of those have left the park resulting in six RBI. Tonight, he gets the gift of Marco Gonzles on the mound against him who is not an overpowering pitcher and has allowed eight home runs in seven starts. Cruz has been straight nasty against left-handed pitching this season with a .358 average and a 1.015 OPS. He is also hitting 81 points higher away from Minnesota with a .333 average and 1.001 OPS. He should have no trouble hitting Gonzales and his 36.2% hard hit rate and .387 wOBA tell me that when he makes contact, he should make some noise. The Twins have not been an impressive team this season, but it should be a great Monday for Cruz.

Willson Contreras, C, CHI – I feel like the Cubs are going to put a hurting on Peterson tonight. Contreras is a much spottier hitter than Bryant is, but I love the matchup here. The 6.32 ERA for Peterson and his recent struggles are just too much for me to ignore. Contreras also hits .356 against left-handed pitching in 2021 with six of his 11 home runs coming against lefties despite 98 fewer at-bats against them. The OPS disparity is equally eye opening as it is 1.086 against southpaws and .633 against righties. He does have one hit in two at-bats against Peterson and I expect him to pad those numbers on Monday night.

Nick Castellanos, OF, CIN – He has six multi-hit games already in the month of June with eight doubles a home run and five RBI. In fact, he has a hit in every game but one so far this month and the 0-5 he took in that June game was the only time he didn’t have a hit since May 11th. His hard-hit rate of 41.5% is great, his wOBA of .452 is top notch and for the season his OPS is 1.051. He will face Eric Lauer today of Milwaukee who has allowed eight home runs in just 28 innings of work so far. He has bounced back and forth between starting and the bullpen. Castellanos does have an RBI double against him in three career at-bats against Lauer, but he is crushing lefties to the tune of a .404 average and a 1.206 OPS. His price tag makes it very reasonable that Castellanos should likely be in the majority of your lineups.

Adam Frazier, 2B, PIT – DFS isn’t always about chasing the long balls, sometimes it helps to have a guy on your roster that can get on base more than once and maybe swipe a bag. Frazier is hitting .336 on the season and has five hits and a stolen base in the last two days. He will face Jon Lester tonight who has allowed just a single run in each of his three starts, but combined they only lasted 13.1 innings. He has been putting a lot of guys on base and walking far too many. This all bodes well for Frazier. He also traditionally leads off which leads to more plate appearances and more chances on the basepaths. He has seven hits in 19 at-bats against Lester in his career (.368 average) with a couple of doubles and three RBI. The Nats bullpen has an ERA of 4.32 for when Lester goes out early again, so Frazier might not whap two home runs, but he certainly should return value on his salary.

Dylan Carlson, OF, STL – I said before that I expected the Cardinals to put up some runs today, well let’s go with a guy who I think is still underpriced. Carlson has been a bit off in the past couple of weeks but doubled twice against the Cubs over the weekend and looks like his bat might be waking up again. He will get Braxton Garrett who is likely to struggle today, and Carlson should feast. He is hitting .364 against left-handed pitching with a .946 OPS in 52 plate appearances against them. He also has been far better at home as he is hitting .340 in St. Louis as opposed to .194 on the road. He won’t break the bank, and Carlson looks to be in line for a solid game.

Andrelton Simmons, SS, MIN – We will go back at Marco Gonzalez again, and this time it isn’t for a guy who is known as a masher. Simmons is certainly never going to compete in the Home Run Derby, but he can get you a couple of base hits at a cheap price. I already outlined Gonzales struggles this season, and Simmons has a respectable .291 average against lefties. He especially has had success against Gonzalez in the past with a .419 average off of the Mariners starter over 31 at-bats. He is extremely inexpensive and could definitely help you fit that stud in your lineup you desperately want.