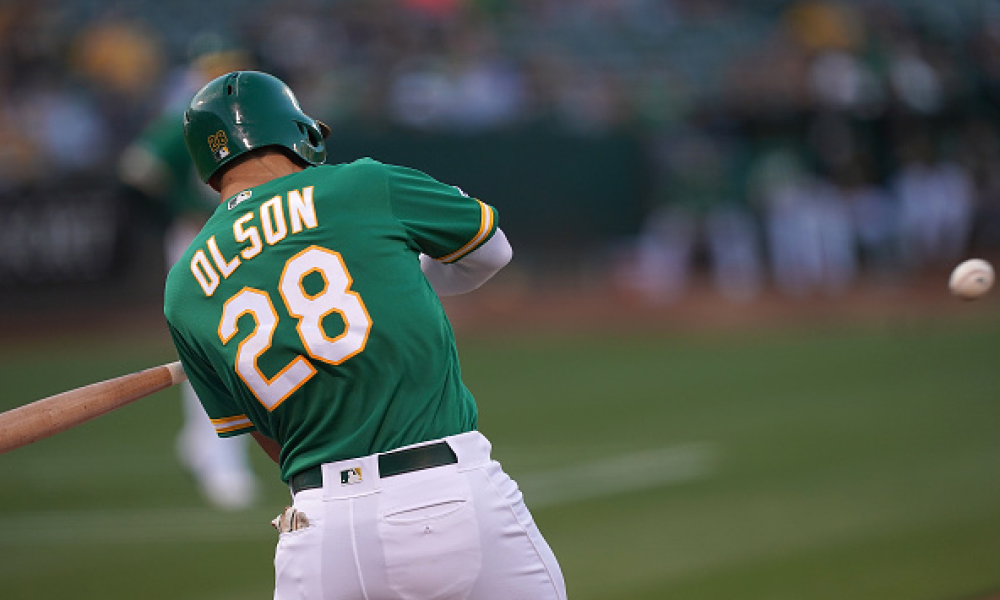 Matt Olson, 1B, OAK – He is on an absolute tear in the last eight games with five multi-hit efforts and five home runs with 12 RBI over that span. He has raised his batting average 32 points in the last eight days. His hard-hit rate of 41.1% and his wOBA of .422 are both as impressive as his .998 OPS for the season. He is also hitting .330 on the road which is great for when they travel to Texas tonight to face Kyle Gibson. Don’t get me wrong, to this point, Gibson is having a fantastic season. However, nothing in his history suggests that his 2.09 ERA can last long term. It was over 5.00 last season and near 4.50 for his career. Olson is 7-14 against Gibson in his career with three home runs. Gibson is pitching well, but Olson is hotter and has had great success against him in the past.

Jose Altuve, 2B, HOU – Altuve is also on a very hot streak with four multi-hit games in the last six including two doubles and four home runs with nine RBI. His batting average is flirting with .300 and he has 16 homers on the season. The best part is the Astros now travel to Baltimore who have almost no pitching without John Means. Altuve has hit a ridiculous .427 in 21 games at Camden Yards. Keegan Akin is sitting on an ERA of 5.76 after eight appearances and has bounced from starting to long relief. Altuve has not faced him yet in his career but is hitting .333 against lefties so far this season. Once Akin leaves the game, the Orioles have one of the worst bullpen ERA in baseball so it should be a great day for Altuve to keep his hot bat going and he won’t be the last Astro mentioned here.

Ketel Marte, OF, ARI – I am not always the biggest Marte fan, but it is hard to ignore what he is doing right now. He has a hit in five straight and four multi-hit games in the last seven. He has also driven in six runs in his last four games. Tonight, he will face Brett Anderson who was great his last time out but struggled to even get into the fifth inning for most of the previous six weeks. Before his last start he had allowed eight runs in his previous 10.2 innings. Marte had destroyed left-handed pitching in his career, and 2021 is no different with a .500 average and a 1.368 OPS in 25 plate appearances. Right on cue, he is two for three against Anderson in his career and is nearly a no brainer for your lineups tonight.

Nick Castellanos, OF, CIN – He was out of the lineup yesterday, which is likely a good thing for a rest before getting ready to face a lefty on Monday. Castellanos is hitting .351 against lefties with four of his 13 home runs coming against them in just 60 at-bats. And even though he hasn’t homered in ten days he still had a hit in four of the last five games. He will face J.A. Happ Monday night who he has hit .545 againts in 22 at-bats including two doubles, a triple, and a homer with seven RBI. Happ has allowed four runs or more in six of his last seven starts and six home runs in his last three. It seems like a great day for a Reds stack but would start with the guy who is mashing lefties and Happ in his career.

Willy Adames, SS, MLW – He is a very streaky hitter and is doing well with six hits in the last three days including four doubles and a home run. Tonight, he is facing one of my favorite pitchers to target in Merrill Kelly. After a decent start to the year, Kelly has allowed 16 earned runs in his last four starts including a home run in each. He has allowed 31 baserunners in his last 20.2 innings, and his WHIP of nearly 1.50 tells you how much he puts guys on base. Adames hits 72 points higher against right-handed pitching and does have a home run in three career at-bats against Kelly.

Michael Brantley, OF, HOU – This guy has been white hot of late with six multi-hit games in the last nine including five doubles, a triple, and a home run. He is hitting .341 on the season and I am having a hard time understanding how his salary is where it is today. He does hit right-handed pitching better than lefties, but his .278 average against left-handers is far from bad. We already documented how poor Akin is likely to pitch and the bullpen behind him. Brantley has hit .320 in his career at hitter-friendly Camden Yards with ten extra base hits in 25 starts. I also like Yuli Gurriel at first base today too if you are looking for an Astro stack.

Josh Reddick, OF, ARI – This one is a bit of a deeper dive but could really help you save some salary cap. Reddick is never going to grace the cover of MLB The Show, but at times he can be a solid hitter. He has struggled some this season but has hit left-handed pitching well in his career. He has had great success against Brett Anderson with six hits in 13 at-bats including two home runs and a double. He isn’t a sexy name at all, but I like the success head-to-head and can really help you pay up for studs elsewhere.