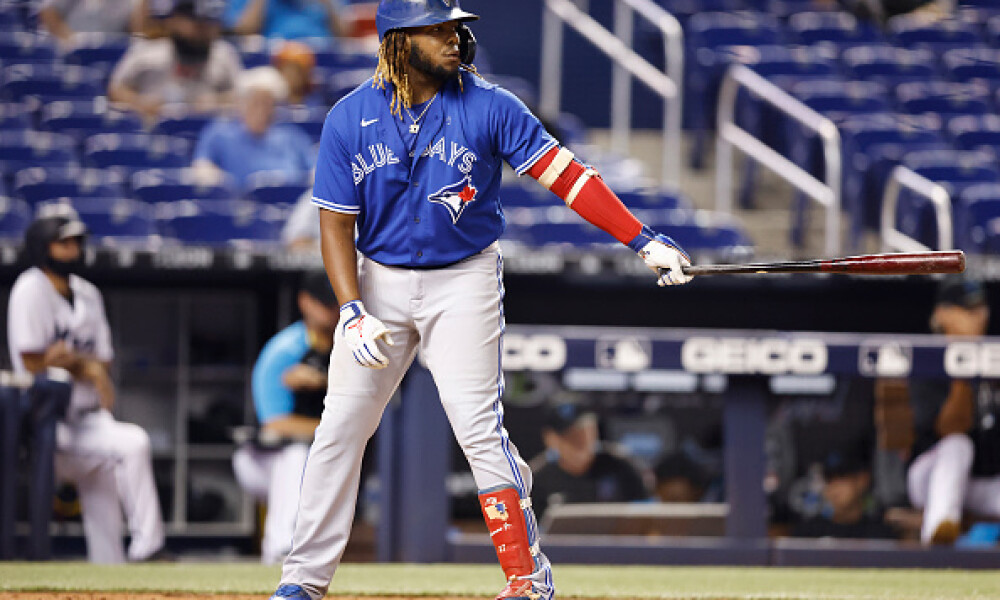 Vladimir Guerrero, 1B, TOR – He has six hits in the last four games, including a double, a home run and four RBI. He is destroying the ball with a 40.1% hard-hit rate and a .468 wOBA and makes the most of it when he makes contact. Vlad has hit .398 at home this season with 13 of his 23 home runs. He will face the Orioles tonight and Dean Kremer on the mound. Baltimore’s starter has allowed ten earned runs in his last three starts that spanned just 15.1 innings combined. He has already allowed 13 home runs in 11 starts and Vlad is among the league leaders in home runs. He also has 21 of his 23 home runs against right-handed pitchers and Guerrero is a great play Thursday.

Trea Turner, SS, WAS – He has heated up again recently with three multi-hit games in the last five including two doubles and a home run with three RBI. He has also stolen two bases and scored five runs. The Marlins will throw Cody Poteet who gets a good number of strikeouts but also hasn’t been great. He has allowed a total of ten runs over his last three starts that lasted just 10.2 innings. His last start was his first after coming off the Injured List he went just 3.2 innings and gave up two homers and walked four guys. Turner has hit near .300 against right-handed pitching and .331 away from home. In his career he has hit five doubles and six home runs in 29 games in Marlins Park so even though it isn’t the best hitter’s park, he has had success.

Cedric Mullins, OF, BAL – He has cooled off some, but Mullins is still having a fantastic season. Not much cures a slump better than some terrible pitching and that is what Mullins is looking at today. The Blue Jays will throw out Anthony kay who has allowed four earned runs in his last two appearances that spanned 7.1 innings including three home runs. His ERA is at 6.43 in 2021 and 5.79 in his short Major League career so we are not dealing with quality here. Mullins did homer against Kay last week as well and can not only help you with the long ball but he has also stolen 12 bases so he can get you fantasy points in a variety of ways.

Cody Bellinger, OF, LAD – I like to grab cheaper prices for guys just coming off injury and that is the case for Bellinger who has ended up on the IL twice and hasn’t been great when he has been healthy in 2021. Bellinger hits 86 points higher against right-handed pitching and 63 points higher at home than on the road. Zach Davies allowed eight earned runs in his last outing and has been very inconsistent this season. Bellinger has hit .357 against him in his career including a home run.

Adam Frazier, 2B, PIT – He is never a guy who is spoken about a lot in fantasy circles, but Frazier is hitting .324 on the season. He is on one of the worst teams in baseball, but as a leadoff hitter he is getting on base and scoring some fantasy points. He has six hits, seven runs scored, a home run and three RBI in the last five games. He will face Carlos Martinez tonight who has allowed 25 earned runs in his last four starts. Frazier has six hits in 18 career at-bats, and is hitting .333 against righties and has a very affordable price tag if you are looking to save some money at second base.

Wander Franco, SS/3B, TB – I mean, why not right? He has three hits, three runs scored, three walks and three RBI in his two-game career and his salary still isn’t anything that would scare you away. Franco is one of the brightest young stars in the game and will face Nick Pivetta tonight. He has allowed three earned runs or more in four of his last six starts, and his 1.35 WHIP means he is putting a good number of people on base. As long as his salary is under $4,000 on DK and $3,000 on FD I am in on Franco.

Yadier Molina, C, STL – It has been a rough month for Molina and he hasn’t hit righties great this season. However, nothing gets a hitter going better than facing the Pirates. Chad Kuhl has allowed three earned runs or more in five of his last seven starts, and his ERA is at 5.66. Molina has seven hits in 15 career at-bats against Kuhl including a double and two home runs.

Gregory Polanco, OF, PIT – It hasn’t been a great season by any stretch for Polanco, but he is hitting over 100 points higher against right-handed pitching and he will face Carlos Martinez and the Cardinals who are struggling mightily. Polanco has hit .438 against Martinez in his career with four doubles, a triple, a homer, and even eight walks. He has also hit .280 in Busch Stadium in his career with 15 extra base hits and 21 RBI in 39 career starts there. He is basically a free spot tonight and the success he has had against Martinez is too hard to ignore.