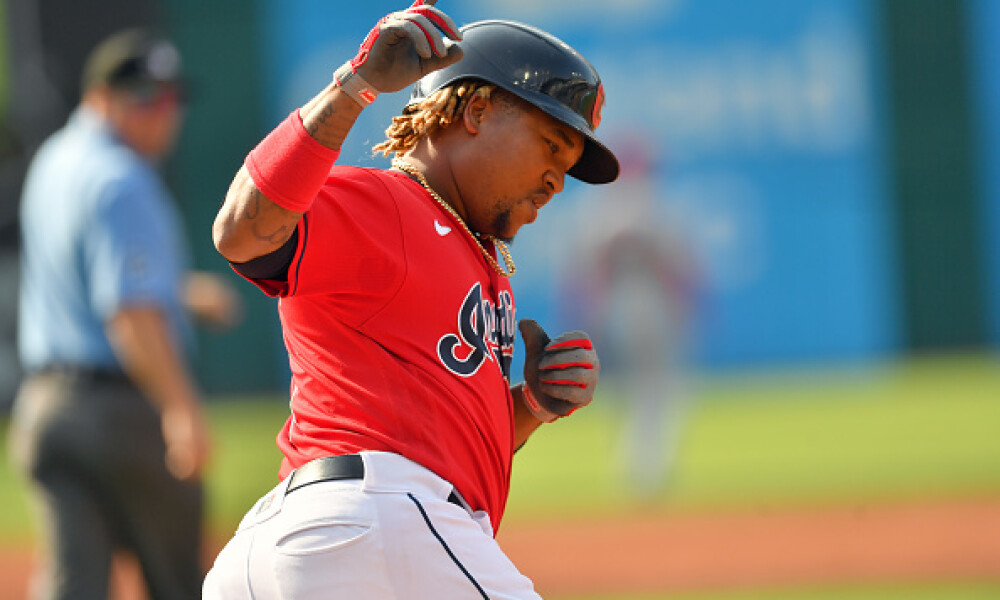 It is a big slate of MLB action for your Wednesday with ten games of action! There are a handful of pretty good pitchers going today, but I will tell you now that we are going to go at a few of them based on circumstances. As always, here are some guys at different salary levels that can help you cash those lineups and see green as we head into the back end of our work week.

José Ramírez, 3B, CLE – He is one away from the 30-homer plateau, as Ramirez has hit three long balls in the last five days, driven in six runs and stolen three bases. He is hitting 34 points higher against left-handed pitching and will face the Rangers Jake Latz who is only starting because of Covid problems. He has had a 4.69 ERA at Double-A this season and has allowed seven runs, including four home runs in his two Triple-A starts that only spanned nine innings! The Indians should tee off on this kid and Ramirez is their best hitter. Look for him to take advantage of this cupcake matchup.

Joey Votto, 1B, CIN – He has a hit in five of the last six games, including two home runs during that span, but Votto does have a very tough matchup today. The Brewers throw Brandon Woodruff who is having a stellar season but has allowed three earned runs or more in three of his last five starts including a six spot to the Cardinals last week. He has also allowed four home runs in his last four outings after just nine in his first 20. Votto has actually hit .318 against Woodruff in his career with a couple of home runs and has 25 of his 28 home runs against right-handed pitching. His average is also 85 points higher against righties. He has hit .318 for his career at Miller Park as well with 21 home runs in 97 starts there.

Trea Turner, SS, LAD – He is hitting .400 in the last seven days and finally hit his first home run as a member of the Dodgers this past week. Not only that but he has stolen two bases and has five multi-hit games in the last eight. He has one hit in four at-bats against Blake Snell, but Turner has been wearing lefties out this season. He is hitting .405 against left-handed pitching with a stellar 1.125 OPS. Snell has been a bit better of late, but his season ERA is still near 5.00 and has not been a pitcher to actively avoid in DFS contests in 2021.

Bryan Reynolds, OF, PIT – He hasn’t been filling the boxscore lately, but Reynolds is still having a fine season with his .303 average and 21 home runs. He will face the Diamondbacks Tyler Gilbert who threw a no-hitter two starts ago, but let’s not be fooled by that. This isn’t a hotshot 21-year-old prospect here. He also did allow four earned runs over five innings his last time out. Reynolds also has more success against lefties as he is hitting .333 off of them with a .939 OPS as opposed to .289 and .895 against right-handed pitching. He obviously hasn’t faced Gilbert in the past, but I’ll take a guy without a high price tag with a .392 wOBA against a pitcher who seems to have trouble finding the plate and being consistent.

Kolten Wong, 2B, MIL – He is currently white-hot with three straight multi-hit games with a triple, two home runs, and seven RBI in those games. Wong has been great at home with seven of his 11 home runs coming at Miller Park, and he will face Luis Castillo who is looking to stay on track. The Reds pitcher was stellar his last time out but had allowed 11 earned runs in his previous two starts that only lasted ten innings. He has also allowed six home runs in his last five starts. Wong has hit .409 off Castillo in 22 career at-bats including two doubles, a triple, and a home run.

Josh Donaldson, 3B, MIN – Here’s your value tier pitcher vs batter special. Donaldson has hit .333 against the Red Sox Nick Pivetta with three home runs and a stolen base. Pivetta is also coming off a start where he couldn’t get out of the second inning before walking three and allowing four runs. In fact, he has allowed four earned runs in four of his last seven. Donaldson is also better away from Minnesota where he hits 32 points higher and has 11 of his 18 home runs on the road.

Andrew Vaughn, 1B/OF, CWS – He is coming off a day where he didn’t play, and I am surprised at how cheap he is on DraftKings. Vaughn will face Robbie Ray today who is having a really good season, but his career has shown he is prone to allowing the long ball. Even this year when his ERA is under 3.00, he has still allowed 24 home runs in 24 starts. Vaughn has faced Ray three times and his one hit did in fact leave the ballpark. In general, Vaughn has fared very well against left-handed pitching with a .316 average and 1.086 OPS. Eight of his 15 home runs have come against lefties despite 167 fewer at-bats against them.