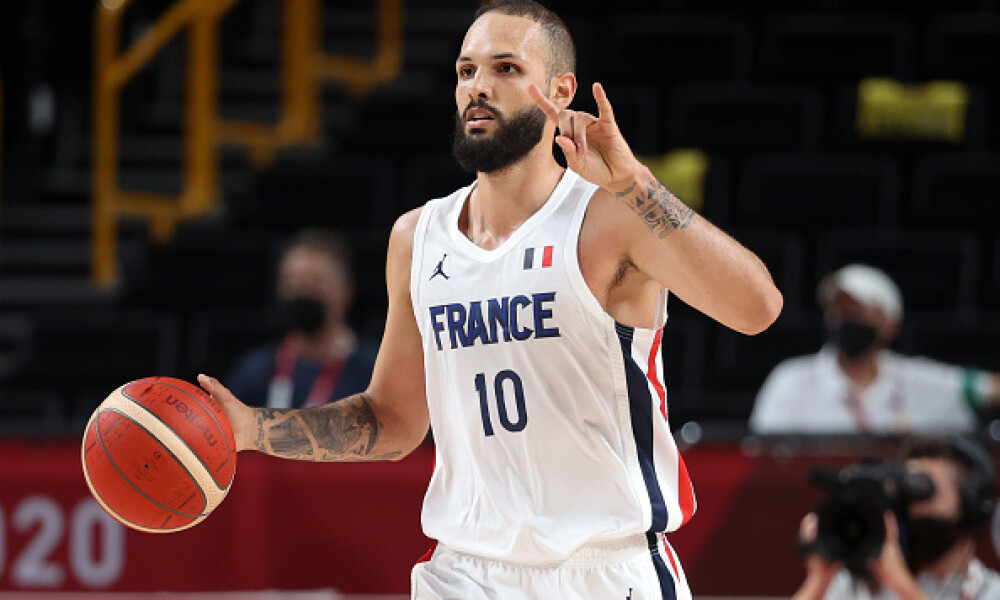 Both Germany and Nigeria have started their Olympics 0-1 and will look to push them to 1-1. It’s slated to be very competitive according to Vegas, so let's dive in!

Germany deployed a starting lineup that didn’t include Moritz “Mo” Wagner and that was slightly surprising, so let’s see if they change things up after dropping their first game of the Olympics.

I mean, where else would we start other than Maodo Lo who came out like a bottle rocket and scored 24 points off the bench. He played nearly 30 minutes and hit six three’s. It’s that sustainable? Not sure, but if he’s going to be shooting often, he’s making the player pool.

NBA product Isaac Bonga looked very sharp in his debut, contributing across the board. In 27 minutes, he had 13 points, four assists, three rebounds, two steals and two blocks. Bonga drew the start and there’s no reason to think he doesn’t approach 30 minutes here again.

Mo Wagner didn’t start, Johannes Voigtmann did. Voigtmann was good on the glass and had four assists too, but only took two shots and scored three points. Wagner was much more offensive minded pouring in 12 points on 10 attempts. He’s the better producer, clearly, but should we spend 8.6K on a guy barely playing 20 minutes? Not so sure.

Someone that should make our player pool is Andreas Obst. Obst started and played the most minutes on the team. He scored 12 points on 11 attempts, both second on the team. He also scored 13 points in their exhibition against Italy, so he can score.

This Nigerian team was really competitive against one of the tourney favorites in Australia before a full quarter blow up led to a 17-point loss.

Their shot leader in this game was Jordan Nwora, taking 12 shots while scoring 10 points. He also played the second most minutes for this Nigeria team, so I have a ton of interest here, especially at this price.

After Nwora, Precious Achiuwa is definitely the top dog here. He scored the most FP on the team while scoring 10 actual and grabbing six rebounds. He’s another Nigerian player that topped 20 minutes here. Speaking of playing 20 minutes, Gabe Vincent led the team with 25 minutes. He shot just 1-of-7 from the floor, but the attempts were there and so were the peripheral stats.

Josh Okogie did a little of everything for this Nigerian team, including stuff the defensive box score and Obi Emegano led the team with 12 points while playing 19 minutes. He’s 3.4K on DraftKings

Jahlil Okafor didn’t play a lot, which was strange, but maybe we go back to the well here and take a shot on him. He didn’t start either, which is worth noting.

I mean, yeah. 40-point favorites here. Nothing much to say.

Look, they looked bad against France, but that won’t be the case here. They’re 40 point favorites for a reason. Kevin Durant was a non factor in that first game. He was in foul trouble the entire game, scoring just 10 points. I’m not sure I want to pay up because why would he play more than 20 minutes if it’s a 30 point game heading into the fourth?

I feel the same about Damian Lillard, Jayson Tatum, Draymond Green and all the guys that play a lot of minutes..likely won’t. All just tournament options.

Zach LaVine and Devin Booker are a little too expensive in my eyes, but Bam Adebayo and Jrue Holiday is where my interest truly lies. At only 7.8K, Adebayo played a massive role for team USA and looked great. Holiday played a massive role too and led the team in scoring. He could be called upon more if this game is a blowout.

This game will not stay competitive for long, but Iran is going to play its starters. Four starters played 28+ minutes and two topped 32.

Behnam Yakhchalidehkordi led the team in scoring, pouring in 23 points while also playing a team-high 36 minutes. He played a bunch during the exhibitions leading up to the Olympics as well. He’s only 4K.

Outside of him, Hamed Haddadi notched a double-double in Game 1 of the Olympics but the problem here is that he faces a really good USA front court and is 9.3K. He’ll be extremely low owned if you want leverage, but I won’t have much exposure.

The two other names worth floating out there are Mohammad Jamshidijafarabadi & Mohammadsamad Nik Khahbahrami. Both guys took 11 shots and played a bunch of minutes, Jams had the far better shooting night, however. Both guys are under 4K on this slate and make for solid value.

This game is projected to be a good, competitive match-up with Australia favored. It’s the highest projected game total as well.

There are a lot of interesting pieces on this Italian squad that put up 92 points and picked up a win in their first game this Olympics.

Danilo Gallinari not only didn’t start, but he wasn’t even their leading scorer. I suspect one or both of those things to change, but worth noting. He still played 25 minutes and scored 18 points, but he didn’t come close to paying off his salary. I’m going back here, however.

There are legit five guys -- including Gallinari -- you should be looking at. Simone Fontecchio, Nicolò Melli, Stefano Tonut, and Nico Mannion. Fontecchio led them in scoring with 20 actual, making all five of his three-point attempts. For three consecutive games, including the two qualifiers, Tonut has scored double-digit actual points.

Nicolo Melli was great in the first game of the Olympic games, falling one rebound shy of a double-double. He’s firmly back in play here. Same goes for Nico Mannion who got his shots up (10) and put up a decent 10 point, seven assist line, he just didn’t do anything else.

I mean, Patty Mills is an international legend. He played 34 minutes in the opener and did a little bit of EVERYTHING. He led them in points and assists while also chipping in four steals defensively. He could very well be the best spend up on the slate.

There is plenty of appeal in the rest of the Australian team. Joe Ingles also topped 30 minutes and put up an 11/4/3 line, something we know he can build upon.

After those two, a bunch of bench players for Australia really caught our eye, two being our good friends Matisse Thybulle and Dante Exum. Thybulle was a force defensively, as usual, notching five steals and Exum scored 11 points with five rebounds and three assists while playing over 24 minutes. Lastly Nick Kay is a force on the interior. He had 12 points and eight rebounds in their first game and outplayed Aron Baynes.

Both teams looked sharp in their first Olympic game as both defeated their opponent. Now, France defeating USA and the Czech defeating Iran is very different, but their records are the same. France is rightfully favored here.

France was and is led by Rudy Gobert and Evan Fournier. Fournier scored a game-high 28 points and Gobert was one rebound shy of a double-double. Gobert had no blocked shots either, which will likely change here. Fournier being 7.5K in this spot is criminal. He made everything happen for the French going 11-for-22 from the field.

Guerschon Yabusele and Timothe Luwawu-Cabarrot are the last two names I’d throw a dart on. Yabu started and TLC took six shots off the bench.

This is a decent Czech squad that could put up a fight in this one.

They started off their tournament with a win, with Tomas Satoransky -- their best player -- going 2-for-14 from the field. Satoransky made up for it grabbing eight rebounds, eight assists and five steals, but he won’t shoot that poorly again. Or will he because Matisse Thybulle is guarding him?

After Sato, Jan Vesely and Patrik Auda impressed the most in their first game. Auda was the team’s leading scorer with 16 points off the bench while Vesely started and put up 11 points, seven rebounds, two assists, and two steals.

Blake Schlib played a significant role off the bench putting up 14 points, four rebounds and five assists and Ondrej Balvin, the team’s starting center who can really rebound, is still free. He will have his hands full with Rudy Gobert, however.