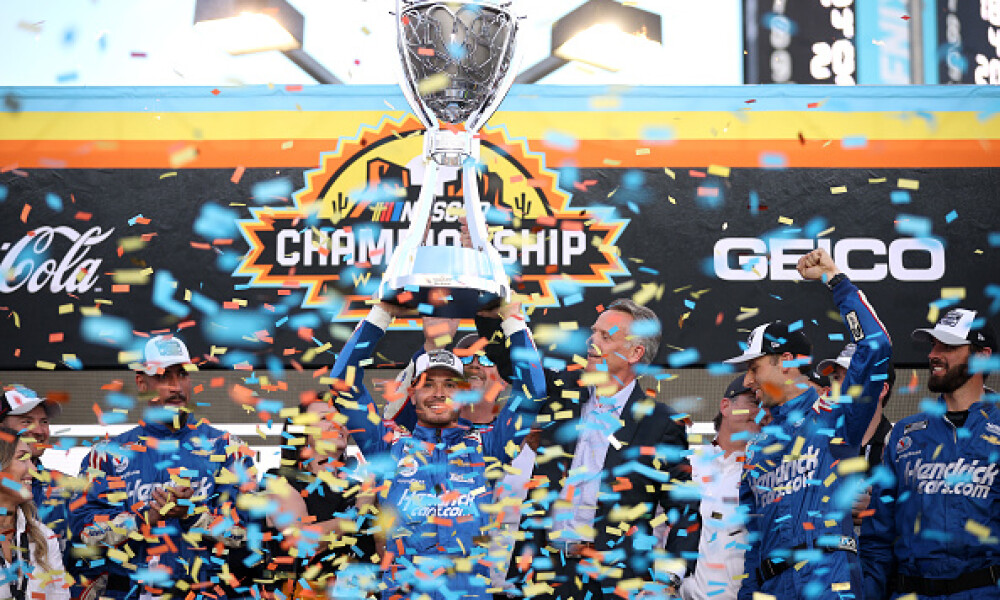 We’re back for another season of the best sweat in DFS…NASCAR! That’s right, it’s already time to kick off the 2022 NASCAR season even though the 2021 season just ended in early November. Speaking of 2021, what a heck of a run that season was for #FANation and everyone out there who was playing our picks and bets.

It started off with a bang with a GPP take down for the Daytona 500 and kept on rolling with several different $1,000-plus winners in the first several races of the year. The winning continued in DFS throughout the year but it was a banner season on the betting side as well for the Cup Series. We hit the outright winner in nearly 60-percent of the races including a streak of 10-straight. It wasn’t just favorites winning either as we hit winners all the way up to +8000 (Aric Almirola’s New Hampshire win) with 11 winners going off at +1000 or more at the start of the race.

With that kind of money-making potential…why haven’t you signed up for the 2022 package yet?

We haven’t even mentioned that the expert providing all of this winning content is the 2x FSWA Racing Writer of the Year and has given DFS and Betting advice on SiriusXM NASCAR Radio. Matt Selz is back for his seventh season of covering NASCAR after watching the sport for the better part of two decades. Don’t worry folks, Dan Malin is back to dominate the Truck Series and Xfinity Series coverage.

Before we get to the content and tools offerings, Matt and Dan are always available in our DFS Alarm Discord NASCAR channel to answer any and all questions you have as well as being big fans of answering Twitter questions at @theselzman for Matt Selz and @RealDANlanta for Dan Malin.

So what can you expect for EVERY race on the schedules, yes including the season-opening Clash and the All-Star Race, for all three series? Well it’s a good thing you asked since now’s as good a time as any to tell you about the award-winning content and tools we’re offering for the upcoming season. Some will be familiar to you, if you’ve been a part of the #FAmily before, but some will be new for the 2022 season.

*Content that is only for the Cup Series will be designated as such in the description. Content listed in order of when they come out for each race.

NASCAR Podcast - This weekly podcast will touch on all things NASCAR from recapping the previous race, to talking about the latest news, to breaking down the strategies for each series’ race for that week. Typically between 30-40 minutes in length and available on site, iTunes, and Spotify.

Track Breakdown - You’re one-stop-shop for all of the stats and data you need for all of the drivers in the field that week. The breakdowns for each week are part write-up and part data tables with the write-up being centered on strategies, news and notes, trends, and interesting facts to know while the data tables give you all of the stats you could want for the Last 5 and 10 races at that track as well as each driver’s DFS scoring histories. Cup Series Only

Weekly Betting Guide - While you may have noticed that Wager Alarm is no longer, that doesn’t mean our weekly betting articles are going anywhere. This year the piece will be hosted on pickswise.com, and even better news, there’s no additional subscription required. There will be a season primer to get you started at the beginning of the year including picks to win the Cup Championship and then each week there will be picks for outright winners and our favorite props for the race(s). Don’t forget to check back for updates following practice and qualifying and any big line movements.

Race Projections - Powered by Fanjections, our NASCAR projections use a wide range of metrics every week including historic, recent, track-level, driver-level, and weekend-specific data points coupled with a weighted algorithm to produce projections for every points-paying race for the season. The projections are updated throughout the weekend following qualifying, inspection, and breaking news. Cup Series Only

Practice Reports - *When relevant* - Making a return in 2022 after a two-year hiatus is the practice report. Done in a live blog form while our experts watch practice and listen to the team and driver radio communications, it gives you insight into what the teams were working on that session, what the drivers think of their cars at that point, how and why a driver posted the time(s) they did. Also included are lap times and lap averages (when available) to see which drivers really showed the fastest speeds in the session. Once qualifying has occurred, the Practice To Qualifying table is added, a valuable resource to see who could move up and who could drop back during the race. The written reports are Cup Series Only but Dan Malin is typically in Discord giving updates on Xfinity and Truck sessions in real-time.

DFS Rankings - Need to see which drivers are a better fit for Cash builds rather than GPPs and vice versa? The Rankings is the go to article for that. Posted shortly after qualifying, the top-15 drivers for each site and each contest format are ranked for that weekend alongside their starting spots and salaries to give you a clearer picture as to who’s in play for the contest of your choosing. Cup Series Only

DFS Playbook - Ah, we’ve come to the staple of the coverage and the flagship product. Figuring out who to play each week is hard, that’s what our experts are paid for, and the playbook is where you’ll find their race-specific plays. Loaded with a ton of analysis and strategy, each playbook gives you more than a dozen options for EACH series across both sites and breaks down exactly why those drivers are the best plays for that race and which contests they are best suited for. A new format will be rolling out in 2022, but it’ll still have the same award-winning analysis in it.

Example Lineups - After reading through the playbook and the rankings and the track breakdown, if you need to see some way a lineup can be set up for cash and GPP contests, the example lineups are right up your alley. They are designed to be just that, examples, that demonstrate the strategies behind builds and the feature will include an article portion that explains the reasoning behind the builds as well.

Prize Picks Plays - *NEW for 2022* Prize Picks is a site in which players can build their own bet slips of props across multiple sports at once so long as there are between two and five picks on your slip. We will be giving picks for every race for all three series over the course of the season. For Truck and Xfinity they will be included in the Playbook for each race and for the Cup Series there will be separate feature each week for the picks.

Race Day Updates - Never get left in a lurch when building your lineups with late breaking news. We will update ALL relevant content and tools as the news breaks throughout the weekend including during tech inspections. All updates will be announced in the DFS Alarm NASCAR Discord channel.

Lineup Generator - This flagship tool has been producing winning lineups for the last three seasons and it’s back to producing winning lineups again. It is an incredibly customizable tool for building lineups whether it be just one or up to 150 on either site. Customize the player pool, the settings, what factors should carry more weight, and even customize your own projections while using the FANjections as the base. Want to build using the drivers in the Playbook for that week? It’s as simple as clicking the Show Only Playbook option and bam, you’re only building with the expert's picks. Aside from setting global driver exposures, the locking mechanism also lets you choose exactly how many lineups you want a certain driver locked into. More improvements are planned as the season gets underway as well. Cup Series Only.

Stat Tables - Want to see drivers’ stats after each race throughout the year? Need per race updates on average stats per race? These tables are were you’ll find that info. As the season progresses we’ll also be adding track type based tables and splits to help you further dial in your research each week.