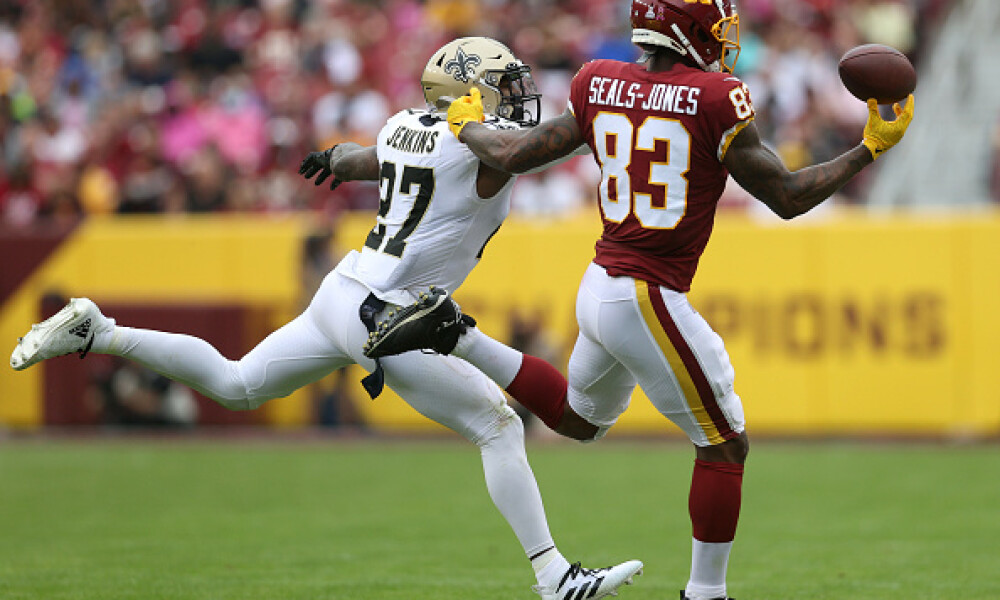 Pretty rough week across the board for tight ends on the main slate (none of Mark Andrews - TE1, Kyle Pitts - TE3, and Travis Kelce TE-6) were on the main slate.  We did nail down Hunter Henry as the TE5 on the week (and a 5.27X value) while Evan Engram, Mike Gesicki , and Darren Waller got a serviceable job done.  Plus our Dart Throw Ricky-Seals Jones came through with 3.64X points as the TE8 on the main slate.  Not a bad week at all.  But now on to

Mark Andrews - Look, Travis Kelce is always an option if you have the money to spend.  It’s honestly no fun to say “start Travis Kelce” but, if the money works out, $7,000 this week isn’t so bad.  But it’s not quite an amazing matchup as Kamren Curl, Cole Holcomb, Landon Collins and the interior over there have done pretty well vs guys like Dawson Knox and Jared Cook and they haven’t been scared to use corners on the TE either like they did with Kyle Pitts.  Instead if you want to go high end I would pivot to Mark Andrews vs. the Chargers who have let up the second most points to the tight end this season.  We just saw what he was capable of.  Andrews is priced evenly on both DraftKings and Yahoo while Kelce is slightly cheaper on DraftKings than Yahoo but not by much.

T.J. Hockenson - Folks are going to be scared off from this play which actually makes it a great time to take advantage.  He’s been banged up but he practiced Thursday which is a sign he’s a full go.  Some podcasts out there have been incorrectly saying that he’s blocking more due to offensive line injuries when he’s not.  There have only been three tight ends to have three games with 8+ targets in a game this season: Travis Kelce, Kyle Pitts, and TJ Hockenson.  And even though it seems like the Bengals have not allowed many points to tight ends, they haven’t faced many good ones either.  Great week to get a discount on a great TE who should be low owned.  Hock is 10% of your budget on DraftKings and only 9% on Yahoo so a little cheaper on Yahoo.

Noah Fant - There aren’t too many great options in this mid range but Noah Fant has kind of gotten a bad rap.  People were excited for his situation but the Steelers have been one of the best defenses vs. the tight end this year.  This week he faces a Raiders team that isn’t as stout and he’s still in a great position for targets -  Jerry Jeudy and KJ Hamler are out for slot guys and fellow tight end Albert O is also out.  Fant is 9.6% of your budget on DraftKings and only 8.5% on Yahoo so that’s the place to play him if you want to make a lineup focusing on Fant.

Hunter Henry - This is the real mid range bargain in my opinion.  And we’re never scared to go right back to the well if the value is there.  Last week vs. the Texans Hunter Henry was a focal point of the offense and he scored.  This week he gets the Cowboys who are letting up the 8th most points to the tight end in a matchup that Vegas has pegged as decent game scoring-wise.  Hunter Henry is tied as the tight end with the fourth most targets vs. man coverage and he’s run the third most routes of any tight end from the slot so he’s a guy that I trust to actually create for himself with route running.  He’s priced fairly evenly on DK vs. Yahoo so pick your poison on the platform.

Ricky Seals-Jones- This is probably the play of the week. they bumped our sneaky play up but not by nearly enough.  $3,000 this week is still dirt cheap for RSJ.  After Logan Thomas got hurt he slid right into that role - and I mean RIGHT into it as he’s played 164 of 165 snaps since Logan Thomas got hurt.  He’s playing a ton of snaps at WR just like Logan did and now Curtis Samuel is out.  On top of that he has a juicy matchup vs. the Chiefs defense and the game has an over/under of 55.5 points.  He’s 6% of your budget on DK and 5.5% on Yahoo so a slightly better deal on the Y! app.

Cole Kmet - People might say that I’m crazy with this pick due to his lack of production.  But here’s the reality of the situation - the Bears have not been throwing the football.  So four targets for Cole Kmet doesn’t seem great until you realize that four targets out of 20 passes is 20% of the targets.  Kmet has been playing a huge snap share including a ton of snaps lined up at WR so everything has actually been pretty decent except the targets.  This week they get the Green Bay Packers who have not been good vs. the tight end in a game where they will NEED to throw.  If that target share holds and they throw 30-40 times like a normal team, that’s 6-8 targets.  At his price of $2,800 on DK and $11 on Yahoo, five targets might actually do the trick.  He’s the deep budget play if you need it. He’s fairly evenly priced on both platforms.

Dalton Schultz - Here is what you need to know about this matchup.

The Patriots are a brutal matchup for tight ends - they haven’t let up 100+ yards or 2+ TDs to a TE since 2018.  The last six times they’ve faced Travis Kelce, he has not cracked 70 yards on time.  It’s just not a good spot for tight ends and Schultz is just too expensive this week.

David Njoku - This is the easiest fade of the week for me.  First off, this guy pretty much hasn’t participated in even half of the routes in any of their games.  This was actually the first time he ran more routes than Austin Hooper and he ran 21 while Hooper ran 18 (and the team threw 43 times).  On top of that they play another absolute brutal defense for tight ends - Isaiah Simmons is one of the very best tight end cover guys in the league.  And coming off his big day last week, everyone is going to be looking at his price thinking he’s a bargen when he’s honestly not even that cheap - only $200 less than Hunter Henry?  When you add all that up, David Njoku really isn’t that good of a play this week.  In fact, he’s a bad one.  Which is why he’s down here.