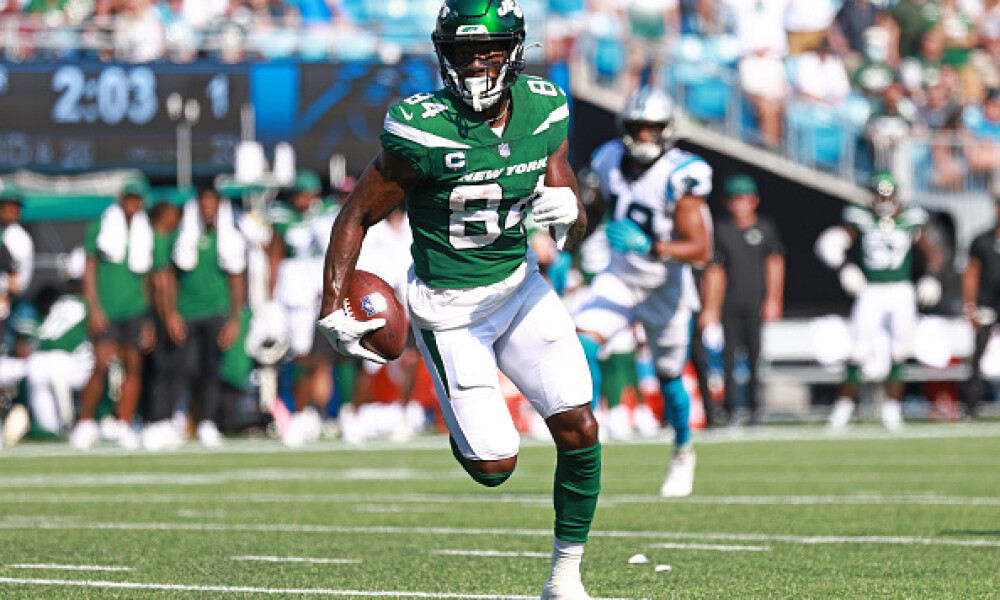 Stefon Diggs, BUF - Justin Reid should be back for Houston, which helps the secondary as a whole, but the team lacks top talent at cornerback. The Houston cornerbacks have no chance of slowing down Stefon Diggs, and he’s in line for his best fantasy day of the 2021 season. Some of the numbers might say that Houston has a good defense against the pass, but recent game scripts haven’t dictated the opposition to get pass-happy like Trevor Lawrence was in Week 1. Did you see what D.J. Moore did to this Houston defense in Week 3? Diggs can do just that.

Davante Adams, GB - Let’s keep this short and sweet. Pittsburgh is struggling and its pass defense has not lived up to its billing, allowing the fifth-most fantasy points per game to opposing receivers this season. Per Football Outsiders, the Steelers are one of just eight teams allowing at least 80 receiving yards per game to the opposition’s WR1. Well, Adams is clearly that and I’m pretty sure he has like a 72 percent target share. I’m only slightly exaggerating.

DJ Moore, CAR - The loss of Christian McCaffery is going to hurt the Carolina offense, but perhaps they look to lean more on Sam Darnold’s arm compared to Chuba Hubbard’s legs. Dallas has allowed the sixth-most fantasy points to wide receivers this season and Moore has at least eight targets in every game this season. I really like Moore as a high-floor play this week, and I truly believe Carolina will get creative with him in the offense while McCaffery is out.

Calvin Ridley, ATL - I know it hasn’t been the most dominant of starts for a wide receiver who was getting some traction as ending the year as the WR1 overall, but the arrow is straight up this week for Ridley. Washington ranks 28th in pass DVOA this year, and they rank 23rd in DVOA on passes to the offense’s left side, per Football Outsiders. Ridley is that guy for Atlanta and the last thing to note is that only the Bucs have allowed more fantasy points per game to opposing receivers this season. Yes, I know the Atlanta offense has stunk, but you can throw it on Washington.

Terry McLaurin, WSH - Just because Daniel Jones couldn’t light up the Atlanta defense, it doesn’t mean that all of a sudden Atlanta is a defense to fear! Oh, quite the contrary! Atlanta ranks 26th in DVOA against the pass and 31st against the opposing WR1. Well, McLaurin is good at the sport of football and is clearly Washington’s WR1, so what isn’t there to like here? In two games that Taylor Heinicke has started this year, McLaurin has caught 15 of 22 balls for 169 yards and one touchdown.

Odell Beckham Jr., CLE - Admittedly, this one scares me, but I’ll be damned if attacking Minnesota hasn’t worked for wide receivers in DFS this season. Minnesota has allowed the fourth-most fantasy points per game to opposing wide receivers, and no Jarvis Landry makes OBJ the clear-cut WR1. Beckham saw nine targets in his 2021 season debut, and there’s no reason to believe he can’t put up quality fantasy production with that workload against an overly-generous Minnesota secondary.

Brandin Cooks, HOU - Davis Mills showed when given the chance that he can throw it around a little bit, and it felt like nine out of 10 times he was looking to Brandin Cooks. The veteran wideout has at least seven targets in each game this season, and in Mills’ first start, he had a 39.3 percent target share! At the very least, he’s going to be targeted a bunch, and game script is in his favor.

Jaylen Waddle, MIA - Indianapolis ranks 29th in pass DVOA this season and they are one of just two teams (Bucs) to allow at least seven receiving touchdowns to wide receivers through the first three weeks of the season. In Jacoby Brissett’s first start in 2021 last week, Waddle caught 12 of 13 targets, albeit for just 58 yards and his longest catch was only nine yards. Kenny Moore is Indianapolis’ primary slot corner and he’s allowed nearly 80 percent of his targets to be caught and a 118.0 passer rating when targeted, per Pro Football Focus.

Kalif Raymond, DET - When going up against Chicago’s defense, you want to avoid Jaylon Johnson right now. If you head to the other side of the field, you get Kindle Vildor, who has allowed 19 yards per reception and a 156.3 passer rating when targeted this year. The Lions move their receivers around a bit, but Raymond will see the least of Johnson, so his DFS appeal gets a slight uptick. He saw 10 targets last week and could be in line for a similar workload yet again.

Corey Davis, NYJ - I know Zach Wilson has been bad of late, but two words… REVENGE GAME! Davis spent the early parts of his career in Tennessee and this will be his first game against them. Tennessee’s pass defense has been horrible this year, allowing the third-most fantasy points per game to wide receivers. Davis hasn’t done much for fantasy managers since his excellent Week 1 performance, but the silver lining is that he’s coming off a 10 target game, and he has at least five targets in every game this season. This is the best matchup for this New York passing attack yet.

Emmanuel Sanders, BUF - Whomever is facing off against Vernon Hargreaves is a wide receiver you want to target in DFS. Sanders should get a good chunk of snaps against him, and that will be all he needs to put up a productive fantasy day. He’s coming off a great day against the Washington Football Team, and Josh Allen should have his way with a very relaxed Houston secondary. Go back and watch the Panthers-Texans game from Thursday night, and you’ll see that Houston puts little to no pressure on receivers.

Amari Cooper, DAL - Cooper has been quiet of late and he now draws a tough matchup against a solid Carolina secondary. Before we go anointing Carolina as the best pass defense in the league, keep in mind that they have faced rookie Zach Wilson in his regular season debut, bad Jameis Winston and rookie Davis Mills in his first NFL start. Just keep that in mind. Cooper has just nine targets over the last two weeks, and he’s playing with a flak jacket to help with a rib injury. If Dallas is going to have substantial success through the air, I like it more towards CeeDee Lamb than Cooper.