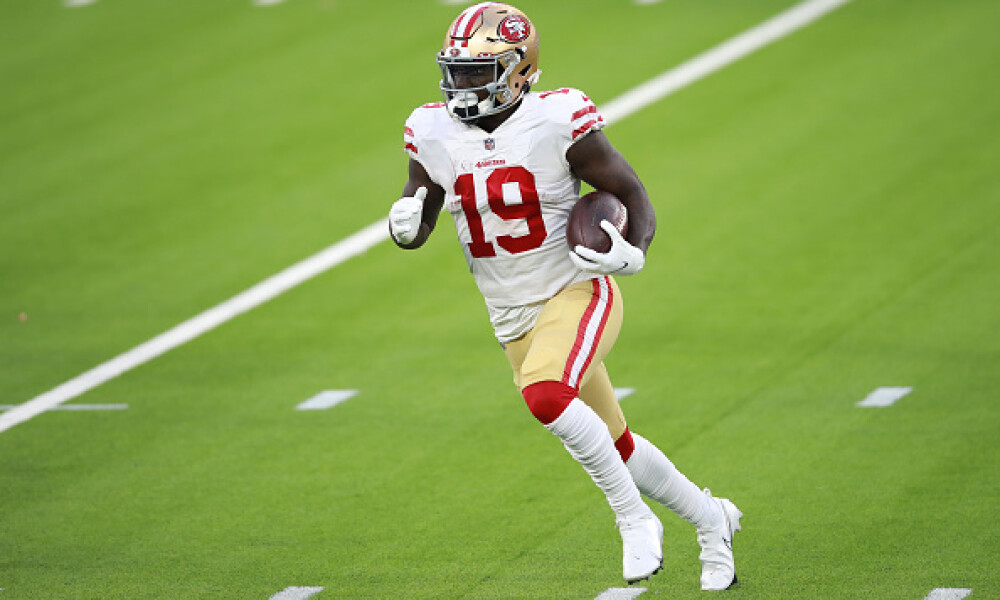 Deebo Samuel, SF - Over the last two weeks, the Bears have allowed a whopping five touchdowns to wide receivers, including three to Mike Evans last week. Overall, the Bears rank dead last in DVOA against the opposing WR1, and over the last four weeks, they have allowed the fifth-most fantasy points per game to receivers. I have my issues with the quarterback play for San Francisco, but one thing is for sure, and that is Samuel is a focal point of the offense, and it is a point to get the ball in his hands. Samuel has at least eight targets in every game this season and at least one rushing attempt in four of six games. UPDATE: Samuel didn’t practice Wednesday but returned in a limited fashion on Thursday. I am not too concerned about the calf and will deploy Samuel as usual.

Cooper Kupp, LAR - Kupp is expensive, and rightfully so. The rapport with Matthew Stafford is out of this world and the two cannot be stopped. Even when the Rams get up big, they continue to throw the ball, and Houston’s secondary gets gassed quickly because the offense can’t sustain a drive. I’m more inclined to play Kupp on FanDuel compared to Yahoo, because he commands just 15.3 percent of your salary there, compared to 18 percent on Yahoo.

Stefon Diggs, BUF - I’m not scared of the Miami defense and neither should you. Miami ranks 21st in DVOA against the opposition’s WR1 and 26th overall against the pass. The Dolphins have allowed the third-most fantasy points per game to opposing wide receivers this season, and in three games with the Bills against the Dolphins, not only have the Bills put up 31, 56, and 35 points but here were Diggs’ fantasy numbers (PPR scoring): 29.3, 14.6 and 16. His price point on FanDuel is ridiculous, and is a must play there.

ADDITION: Mike Williams, LAC - Austin Ekeler is banged up, meaning that Williams could see a few extra targets. After being banged up himself, he logged full practices this week, which is excellent. The Patriots could choose to lock in on Keenan Allen, but they are hurting in the secondary right now. Over the last four weeks, only the Dolphins, Titans and Browns have allowed more fantasy points per game to receivers than the Patriots. I like tossing Williams in some GPPs on Sunday,

ADDITION: A.J. Brown, TEN - No Julio Jones, no problem! It’s going to be hard to fade Brown with no Jones in this one. The Colts have allowed the 10th-most fantasy points per game to opposing receivers this season, and Indy is one of just four teams to have allowed 11 receiving scores to the wide receiver position this season. As long as he stays away from fast food leading up until game time, he has a great chance to post a third straight game with at least seven grabs and 91 receiving yards.

Courtland Sutton, DEN - Sutton gets a great matchup against a Washington secondary that has been handing out fantasy points to opposing receivers like the Halloween fanatics give out candy to trick-or-treaters. Sutton is averaging 10 targets per game over the last three weeks, and he has at least five receptions, 100 yards, or one touchdown in all but two games this year. Only the Browns have allowed more receiving yards to the opposing WR1 than the Football Team in 2021. Oh, speaking of Cleveland…

Diontae Johnson, PIT - Let’s go ahead and exploit that. No team is worse against the opposing WR1 than the Cleveland Browns, and Johnson is Pittsburgh’s number one wideout. The Browns have allowed the third-most fantasy points to wide receivers over the last four weeks, and they are one of just four teams to have allowed seven scores to the position in that span. Johnson has at least 71 yards in each of his last four games, including three games with nine receptions.

D.J. Moore, CAR - Yes, Sam Darnold has been atrocious, but is that stopping me from playing Moore in this matchup? Hell no. The top-scoring receiver against Atlanta the past few weeks has averaged nearly 18 fantasy points per game (PPR), and Moore can easily exceed that in this one. I do like Robby Anderson, too.

Michael Pittman, TEN - Yes, the Titans kept the Kansas City offense in check last week, but if you all of a sudden think that we can’t pick on Tennessee’s secondary, I want to play you in some one-on-ones in DFS this weekend. In an earlier matchup against the Titans, Pittman caught six balls for 68 yards on 12 targets. The Titans are still allowing the most fantasy points per game to opposing wide receivers this season, and last I checked, they haven’t gotten any healthier, or better, in the secondary. He doesn’t break the bank but has plenty of upside with a pretty solid floor, making him an ideal cash game receiver in Week 8.

Van Jefferson, LAR - It’s hard not to like every Los Angeles Ram imaginable in this contest. For the year as a whole, it may look like the Texans don’t allow a lot of production to opposing receivers, but if you watch them play, quarterbacks hardly have any difficulty getting the ball into the hands of their playmakers. Houston has allowed the 11th-most fantasy points per game to opposing receivers over the last two weeks, and Jefferson is becoming more involved. Also, don’t sleep on the fact that he logged a season-high snap share last week…

Odell Beckham Jr., CLE - I believe there is a path to using OBJ, especially on DraftKings where he is so cheap. The Steelers have allowed the fourth-most fantasy points per game to wide receivers this season, and it isn’t too common to find a player of his pedigree, or a player averaging seven targets per game over the last two weeks at this price point. He cannot be trusted in cash games, but if he’s healthy, I get the allure in GPPs.

Allen Robinson, CHI - Robinson is getting close to the point of “well he’s this cheap, so I have to play him.” I thought hard about it, too, but the fact remains that the rapport and production just aren’t there with Justin Fields. Robinson is averaging under five targets per game over the last four weeks, while the 49ers are slightly better than the league average in terms of fantasy points allowed per game to opposing receivers. I’d rather play Mooney if you feel like you must start a Chicago wideout.