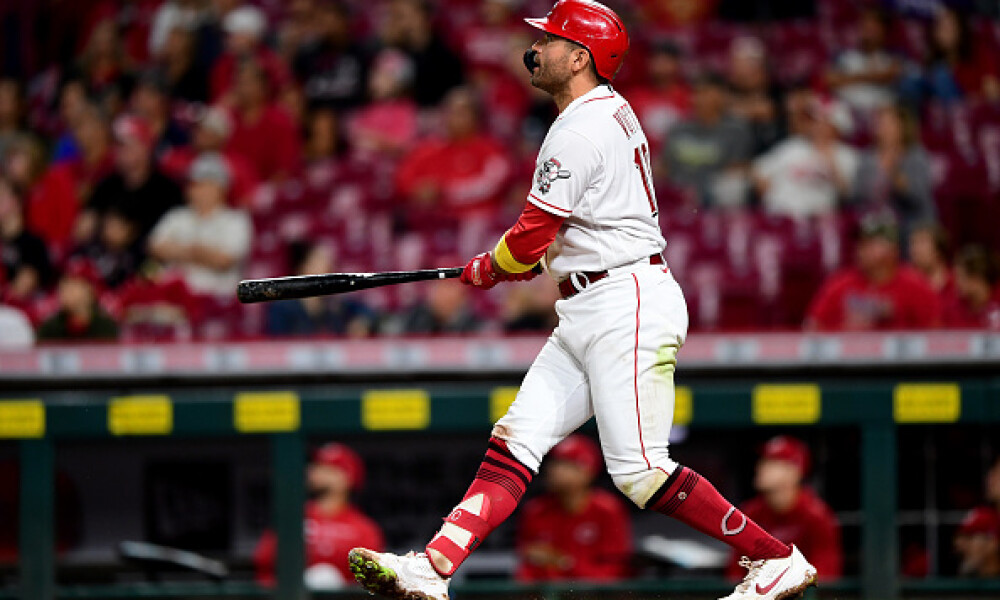 There's 13 games on tonight's slate with playoff implications and players fighting for year end awards. A massive 12 game run total in Coors Field, rookies on the mound putting hitters into great spots and these could fuel runs aplenty this evening. Please access the pitching coach, value vault and DFS playbook before finishing your build. Good luck!

Two home runs shy of his career high, Votto's on fire again hitting .344/.533/.906 his last 45 plate appearances spanning 11 contests. More importantly, he's launched five home runs and eight of his 11 hits in this sample resulted in extra-bases (three doubles). He's also walked (13 times) more than he's struck out (five times) with a robust .563 isolated power and a .561 wOBA. He faces Reynaldo López in Chicago this evening and a tired bullpen could translate into another strong night for the savvy veteran.

Another hot hitter, and opposing Votto with the Reds tossing a rookie making his major league debut. Robert's slashing .356/.396/.644 his last 48 plate appearances with four doubles, three home runs and 11 RBI. Shifting into second in the lineup provides him with more plate appearances and DFS upside on a night many will focus too heavily on Coors bats.

Segue alert, fading Coors entirely comes with risk, so do not overlook Thomas. He's scored 13 runs his last 13 games with three home runs, eighth RBI and two stolen bases. Over his last 67 plate appearances, he's batting .276/.373/.534 with a .259 isolated power as well. Then viewing his splits versus southpaws, things get even more spicy. He's slashing .475/.571/.775 against left-handed pitching with the Nationals with a .301 isolated power, a .556 wOBA, five doubles, two triples and a home run. Did we mention he will hit lead-off? Giddy up.

A September slump depresses Story's price point, but it's better for us. He's been a disappointment this year and enters free agency on a down season, but at home versus a left-handed pitcher sparks his production. In 82 at-bats in Coors Field facing a southpaw, Story owns a .341/.402/.610 slash line with nine doubles, two triples and three home runs. He's also familiar with Patrick Corbin going 8-for-27 in past match-ups with two doubles, a triple and two home runs. Let others sleep on Story and target with confidence tonight.

Death, taxes and Donaldson facing a left-handed pitcher? He carries a .909 OPS with a .288 isolated power and 11 home runs in 132 at-bats (one every 12) this year against them. He also owns strong numbers versus Tyler Alexander with two hits in five previous at-bats, including a home run and sports a .410 xBA, a 1.003 xSLG along with a .611 xwOBA. Pretty, pretty, pretty good.

Take the introduction from Donaldson above and apply it with Hays. He's produced 11 doubles and 11 home runs with a .305/.342/.558 slash this year versus left-handed pitching resulting in a .253 isolated power. Over the last two weeks, Hays owns a .966 OPS with a .319 isolated power, four home runs and 10 RBI in 54 plate appearances. He's a bit boom or bust in career at-bats against Chris Sale, but both hits left the yard, including in their most recent match-up.

If fading Votto, or using Dalbec in the utility slot on FanDuel, it's tough ignoring his last 34 plate appearances generating 17 batted ball events with six barrels (35.3 percent) and 12 hard hits (70.6 percent). He's produced nine doubles, three triples and 10 home runs in only 169 at-bats against southpaws this year with a .284 average and a .266 isolated power. Plus, he's hot of late with a .276/.382/.690 slash his last 10 games spanning 34 plate appearances with three home runs.