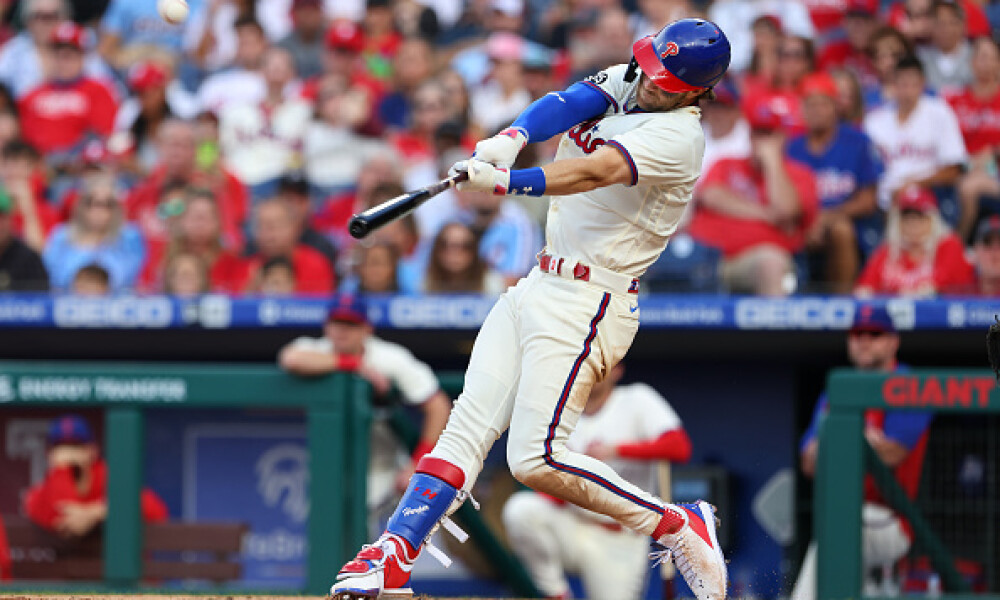 We have a nine-game main slate on our hands on Saturday, kicking off at 7:05 pm EST. We have some big-time pitchers taking the hill, but enough gas cans to help us round out our hitting coach. Let’s dive in, shall we!

Bryce Harper, OF PHI - This season has been a tough one for JT Brubaker’s neck. He’s been constantly turning and watching baseballs leave the yard. 21 times in fact. He’s allowed 1.86 HR/9 innings, so insert Bryce Harper here. Harper has a .692 SLG over his last 10 games, .535 on the year and 14 HR versus right-handed pitching overall. He has a .418 wOBA against righties, too. He should be back in the lineup here and he’s one of the top overall plays of the slate.

Eduardo Escobar, 2B/3B MIL - Kyle Muller’s stats may look nice on the outside, but a 4.80 xFIP and .230 scream regression! Escobar hit his 23rd homer of the year on Friday, first with Milwaukee, and now gets a left-handed hurler Saturday. He’s feasted off lefties this year notching a .638 SLG%, .264 ISO and .367 wOBA. Escobar is hitting in the middle of a potent Brewers lineup and has a serious opportunity to do a LOT of damage in this spot.

Jorge Polanco, 2B/SS MIN - Polanco continues to rake despite all of the moving parts around him. There have been trades, players in and out of the lineup all month, but Polanco continues to do his job. Just over the last 10 games, Polanco has hit .400 with an OPS north of 1.100. He gives right-handed pitchers trouble posting a .346 wOBA, which correlates perfectly with Jake Woodford and the .432 wOBA to LHH he’s allowed. Lock and load Polanco at this price, baby!

Franmil Reyes, OF CLE - No yard can keep the Franimal contained right now. He’s hitting everything out. He’s blasted three home runs over his last two games, five over his last nine overall. In just 59 games this year, Reyes has hit 20 homers and has a robust .614 SLG%. His .358 wOBA against left-handed pitching obviously plays and 13 of the 17 homers Dallas Keuchel has allowed have come against right-handed pitching.

Dylan Carlson, OF STL - We want to attack Twins SP Bailey Ober with left-handed bats. The Cardinals don’t have many in their lineup, but the switch-hitting Carlson checks a lot of boxes. He comes into this game hot, notching four homers and a .999 OPS over his last 10 games. Ober serves up a lot of power to left-handers allowing 2.61 HR/9 innings pitched. Carlson has loved hitting at home this season, batting .318 with a .359 wOBA.