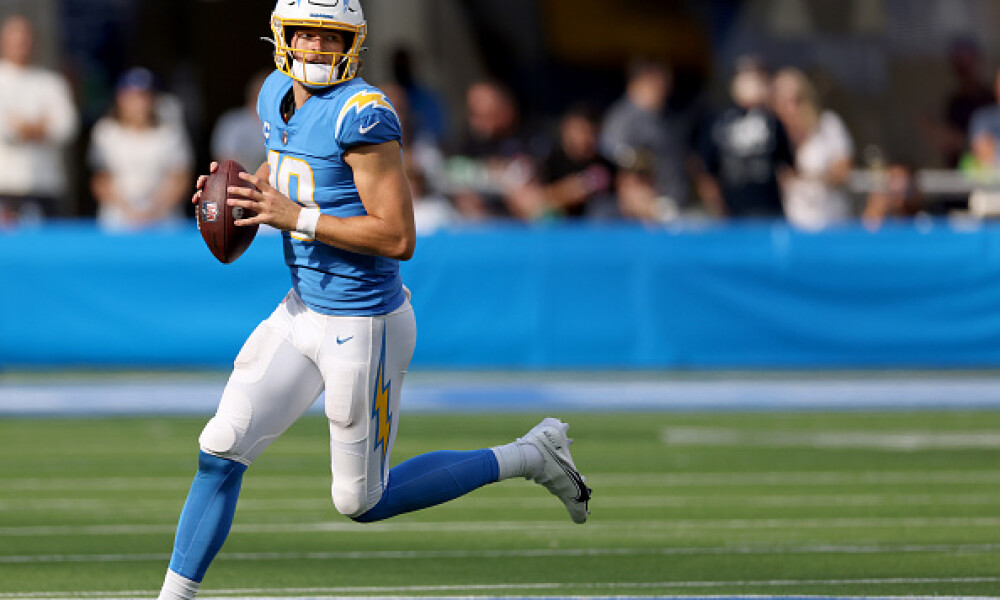 Patrick Mahomes, KC – The Chiefs are now 2-3 on the season after falling to the Buffalo Bills at home in Week 5. Mahomes has struggled more than usual this season, throwing six interceptions over the last four games but from a fantasy perspective the production continues to roll in, having thrown at least three touchdowns in all but one game this season which included a five-touchdown effort against the Eagles. In Week 6 the Chiefs head on the road to face a Washington defense that is stout up front against the run but rank just 29th per DVOA against the pass. Even with Tyreek Hill and Travis Kelce a bit banged up, this feels like a big game in the making for Mahomes.

Lamar Jackson, BAL – This one may be chasing the points a little bit or it could be the fact that the Chargers defense just gave up 40+ points to the Browns last week as well. The Chargers rank 31st in DVOA against the run and running is what the Ravens offense is centered around however, Jackson is proving the haters wrong when it comes to airing it out as well as we saw last week against the Colts. He along with Marquise Brown and Mark Andrews are becoming a handful for opposing defenses and there is a real chance that first round pick Rashod Bateman is going to be active for this upcoming week as well. Jackson is definitely on my radar.

Justin Herbert, LAC – Carson Wentz just threw for over 400 yards against this Baltimore defense and Herbert himself went for 398 and four scores against the Browns last week. The Ravens generally stingy defense sits 20th in DVOA against the pass and they will have their hands full this week as they try and shutdown the likes of Keenan Allen, Mike Williams and Austin Ekeler who are all having fantastic starts to their seasons, especially the latter two. Herbert has 11 passing touchdowns over the past three weeks and last week he even added a rushing score as well.

Matthew Stafford, LAR – The fantasy points for Stafford have been solid this season and he has benefited greatly from an insane passing volume of late, averaging almost 40 pass attempts per game over the last three contests. In Week 6 the Rams head on the road to face a Giants squad that is really banged up right now on the offensive side of the football and while Daniel Jones is expected to be active this week, he is not going to have Kenny Golladay or Saquon Barkley available to him and may also still be without Sterling Shepard and Darius Slayton who have missed time due to hamstring injuries. I don’t have any question on the Rams ability to put up points here, my hope is that Stafford throws for the three scores before the team’s ground game takes over or else the fantasy production here may be limited.

Sam Darnold, CAR – Darnold crashed back to Earth last week against the Eagles, completing just 56.8-percent of his passes for 177 yards with one touchdown and three interceptions. Perfect time for everybody to be off of him in DFS so we can jump on in this matchup against the Vikings. Minnesota ranks 20th in DVOA against the pass and 6th in DVOA against the run. There is a possibility that Christian McCaffrey will be active this week which will help the passing offense but even if he was to miss time, I still expect plenty of volume to D.J. Moore and dare I say, maybe even signs of life out of Robbie Anderson who has 18 targets over the last two weeks but just seven catches.

Dak Prescott, DAL – I will be honest, Dak nearly ended up in the FADES section of this article despite the fact the Patriots defense was just shredded by Davis Mills and the Houston Texans this past week. Don’t get me wrong, Prescott is playing at an elite level right now, having completed nearly 74-percent of his passes for 1,368 yards and 13 touchdowns with just three interceptions but If I have one bit of hesitancy here it’s the fact that New England actually ranks 22nd in DVOA against the run which means a heavy dose of Ezekiel Elliott may be in order.

Taylor Heinicke, WFT – Heinicke struggled last week, completing just 48.8-percent of his passes for 248 yards and two interceptions with zero touchdowns. This ended a string of three starts in which he had seven touchdowns while completing nearly 65-percent of his throws. In Week 6 Washington welcomes in the Kansas City Chiefs who rank dead last in DVOA against the pass and should push the tempo of this game creating a great environment for Heinicke to put up some fantasy points.

Carson Wentz, IND – Super cheap price here for Wentz who is coming off a game in which he completed 71.4-percent of his passes for 402 yards and two touchdowns against the Ravens. He has thrown seven touchdowns with just one interception through five games this season. On deck for the Colts is a matchup against the Houston Texans. Houston is among the worst teams in football against the run so many are expecting a big game from Jonathan Taylor, but I can see Wentz getting his fair share in this one as well.

Kyler Murray, ARI – I know you are going to see the fact that Justin Herbert just lit up this Cleveland defense and wonder why I am suggesting facing the top QB in fantasy but hear me out for a moment OK? Cleveland is allowing the fourth fewest total yards per game this season, allowing the second fewest rushing yards and the 11th fewest passing yards. They are also at home which is a spot I tend to like defenses. This isn’t to say I don’t think Kyler can score fantasy points this week, but he does only have three total passing TD’s over the last three weeks and when looking at his price tag and the matchup, I think there are better options around him on the slate.

Joe Burrow, CIN – We both see the matchup against the Lions and are excited for what Ja'Marr Chase is capable of doing this week so in turn you may also think about starting Joe Burrow, but I think maybe we pump the breaks a little bit when it comes to that. My worry with Burrow this week stems from the Bengals insistence on running the football. Last week, with Joe Mixon not 100-percent, I figured we could see 50 pass attempts from Burrow against the Packers but instead we saw Mixon with 10 carries and Samaje Perine 11 carries in a game that was back and forth. They even ran the football in spots where it was pretty obvious, they should have been throwing in an effort to improve field position. For whatever reason this offense does not want to let Burrow loose, maybe to protect him but now he has a matchup against a Lions team that ranks 28th against the run per DVOA and if Mixon is a 100-percent go then I think we may see another 20+ carries from him.