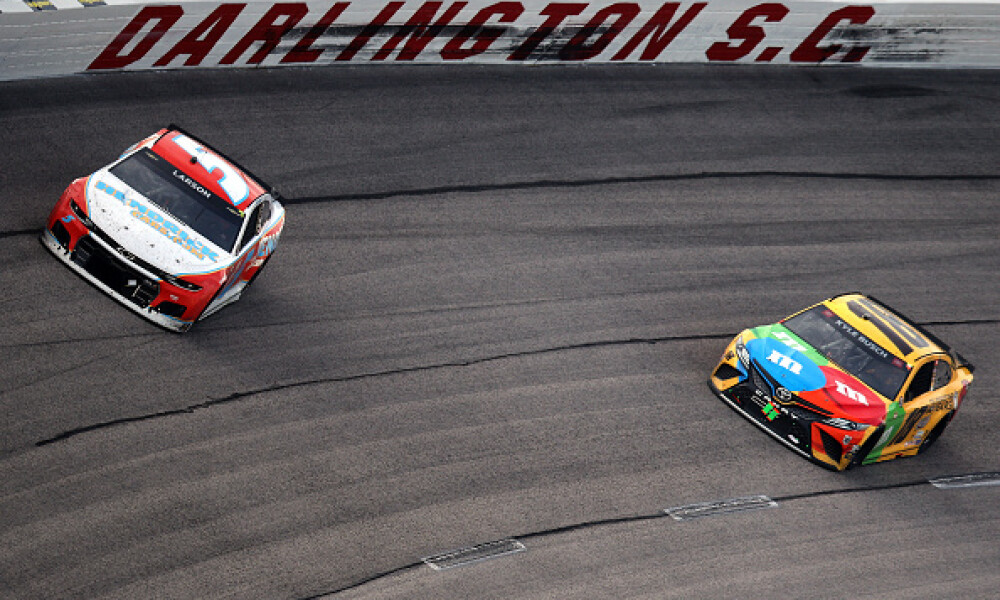 The Lady in Black. The track that’s Too Tough To Tame. Those are all apt nicknames for this week’s host venue of Darlington Raceway. It’s also throwback weekend for the Goodyear 400. What does that have to do with DFS NASCAR? Nothing. But there’ll be some sweet paint schemes on the track and that’s always a good thing. Darlington is one of the toughest tests on the Cup schedule. Let’s dig into why it’s so tough and how we use that for DFS strategy and which drivers have the best driver averages at Darlington recently.

As you heard Dan and I talk about in the podcast this week, there is quite a lot to like about how the racing for the Goodyear 400 is shaping up. The Next Gen cars have been putting on a show at the intermediate tracks all year and this weekend should be no different. At Auto Club and Vegas especially, we saw multiple grooves of racing all afternoon long and we got passes for the lead. Not only were there passes for the lead, but the cars were really hard to control — that makes for great racing. For DFS, we’ve seen a lot of different strategies work here. There are drivers in every grouping of 10 in the gird that outproduce the average scoring and we can build with dominators or PD plays in mind. As far as comparisons go, we’re looking at high tire wear tracks and multi-groove intermediates over the last few years. Not only do those tracks’ surfaces match Darlington’s but the aero package on the cars was very similar to what we have this year as well.

The Goodyear 400 is being run on a 1.33-mile egg-shaped track. That’s right egg-shaped. If you look at it from an aerial view, Turns 3 and 4 are tighter radii than Turns 1 and 2 which can make for tricky car setups. It’s a fairly steeply banked track as well. The first set of corners are banked at 25 degrees while the tighter second set of corners is tilted at 23 degrees. This race will be shorter than the next race here later in the season but with 293 laps, laps led and fastest laps will still be a difference maker for DFS builds. Track position likely won’t matter as much this week as it typically can here with the package that’s on the car. One interesting note is that the pole-sitter hasn’t won here since 2014 and prior to that it was 1997 when the first driver in the grid won.

The DFS Scoring Table: Race 1 is the most recent race in the sample size with Race 5 being the earliest. We are using the Last 5 Darlington races for the data.

The Similar Races table: The data is comprised of stats from the last 10 races at Auto Club, Las Vegas, Kansas, Homestead, and Darlington.

The Weekly Track Stats Table: The stats are based on every race at Darlington since 2012 based on starting spot regardless of the driver in that starting spot.