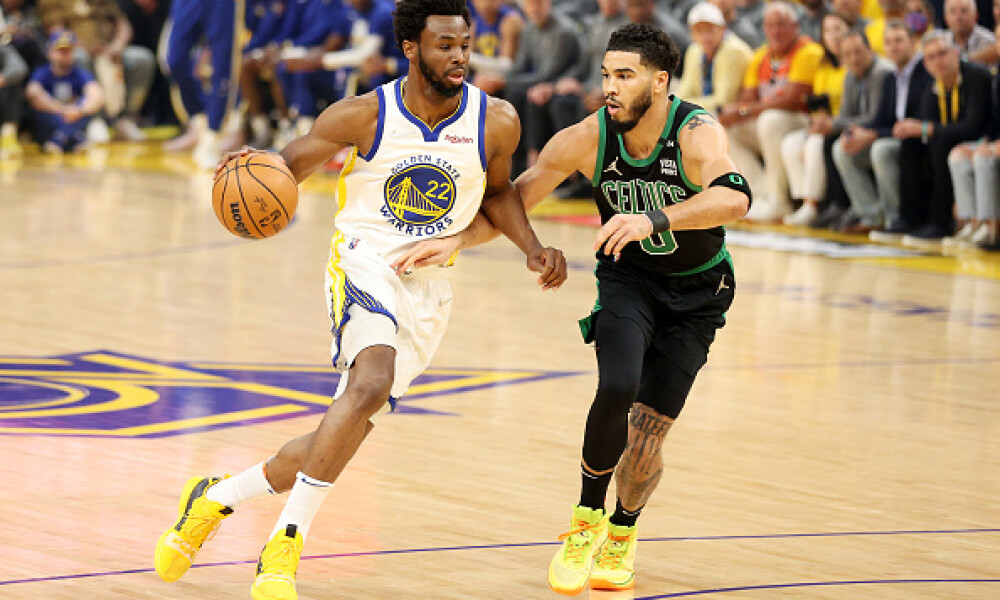 The 2022 NBA season is on the line for the Boston Celtics after the Golden State Warriors won Game 5 for their second straight victory in the 2022 NBA Finals. Tonight's NBA DFS showdown slate now turns to Game 6 in the series as Boston looks to stay alive. You can build NBA DFS lineups on DraftKings, FanDuel, or Yahoo Fantasy for tonight's matchup. The Celtics are 4.5-point favorites with a 209.5 total as of this writing. Stephen Curry, Jayson Tatum, and Andrew Wiggins are among the NBA DFS top plays tonight but there are plenty of ways yoy can go for daily fantasy basketball lineups. As you build NBA daily fantasy lineups, be sure to use all of DFS Alarm's NBA tools. Check out the latest NBA player news, NBA daily projections, and the latest NBA Vegas odds for your NBA DFS lineups. Now, here are the NBA DFS top picks and daily fantasy core plays for the 2022 NBA Finals Game 6 on Thursday, June 16th.

In Game 5, we saw Jayson Tatum shoot better but the Celtics turned the rock over 18 times. They were even able to limit Stephen Curry for the first time in the series as he scored just 16 points. The Warriors continue putting out a smaller NBA starting lineup with Draymond Green, Otto Porter Jr., and Andrew Wiggins in the frontcourt. How were the Warriors able to defeat the Celtics last game without Curry at his best? Wiggins. Wiggins has produced back-to-back double-doubles and he scored 26 points to help propel the Warriors. Tonight could very well be it for the 2022 NBA Finals, but we can’t fully count out Boston. They’ve been the best defensive team in the NBA since January and if they can take care of the ball better than they have in the last few games they will extend this series to a seventh basketball game on Sunday. Here are tonight’s core plays for DFS NBA lineups.

Stephen Curry had an off night shooting the basketball last game and he didn’t even sink a three-pointer. He shot under 32 percent from the field, but it doesn’t matter. The Warriors will continue to give Curry the eternal green light and we should see him take 20-25 shots tonight. He shot at least 50 percent from downtown in Games 3 and 4 and we can definitely see him rebound from the disastrous shooting performance last time out. We did see Curry swipe the ball multiple times for the fourth time this series in Game 5. Curry will provide relief when it comes to boards and dimes as well as he’s grabbed no fewer than four in any game in the Finals and he’s coming off of an eight-assist game. If Andrew Wiggins or Klay Thompson is off shooting the ball tonight, it will be up to Curry to get to the rim. He’s had a few games in which he’s cut to the rim successfully off the ball while also putting his head down and driving to the rack with force. The Celtics expect him to constantly fire away from downtown, but an underlying key to both of these teams' success is their effectiveness in the paint. We've seen Curry and Wiggins succeed inside the arc.

Jayson Tatum produced a double-double for the second straight game and seeing him shoot 50 percent from the floor was very encouraging in Game 5. The Celtics will need him to carry that momentum into this game. Tatum will have to maintain control of the ball and his emotions. Boston can’t spend the entire game complaining about fouls and they have to remain focused on beating the Warriors. Tatum has turned the ball over 10 times combined in his last two games. Tatum has been playing more aggressively in the post and despite struggling to shoot the ball overall throughout most of this series, he has shot at least 50 percent from beyond the arc in three of his last four battles. Tatum has stolen the ball in four of five games and he’ll continue helping move the ball around to keep the Warriors on their toes. If Tatum’s shots aren’t falling, we’ve seen him successfully transition to a pass-heavy player and he will still get a high volume of shots even if he’s missing. He’s taken 20 or more shots in each of his last three games.

Let’s run it back once again with Andrew Wiggins as an MVP option after he dropped 26 points and grabbed 13 rebounds. Wiggins has pulled down 29 rebounds combined in his last two outings. He’s hit the 20-point mark in scoring in two games in the finals and we should see him take 16-20 shots tonight. The Warriors don’t have reliable scorers in the post and Wiggins has utilized his mid-range game very well. Wiggins has also posted steals in four and blocks in three of five games in this series. After shooting over 52 percent last game, expect Wiggins to get fed a lot at the elbow. Klay Thompson continues to play primarily at the arc and that gives Wiggins more room to work with and get high-percentage shots from either right outside the paint or even from right under the basket. The Celtics have yet to put a body on Wiggins to keep him from crashing the boards.

Jaylen Brown is coming off of a very poor shooting outing in which he didn’t hit a single three-pointer. If the Celtics are going to survive tonight, Brown will need to shoot how he did in games three and four. Brown has scored 21-plus points in three games in the Finals. Brown will need to attack the rim with force. He was horrible at taking care of the ball and watching his back when the Warriors' defense collapsed on him in the lane. He turned the ball over in back-to-back possessions at one point but for the most part, he’s kept his turnovers down. It was good seeing Brown take 10 free throws last game and we’ll have to see him draw contact and not hang by the arc. He’s posted steals in both of his last two contests and pulled down nine boards in two of his last three games. Brown will play 40 minutes tonight and he should take 16-20 shots this evening. Expect him to provide better possessions in this game.

Marcus Smart hit the 20-point mark in scoring for the second time in three games, but he’s been a big reason the Celtics fall out of some of these games. Like Brown and Tatum, Smart as the main floor general will have to watch his back at all costs and not lose the ball. Smart will also have to watch his temper as it looked at one point like he was going to get thrown out of the game and Boston needs the reigning Defensive Player Of The Year to be the lockdown defender that he is and to be mindful of some of his passes through traffic on offense. Smart can’t fight the refs, just the Warriors. Smart dropped five dimes in three of his last four games and we’ve seen him steal the ball in three games in this series. Expect Smart to once again play 40 minutes and we saw him shoot over 46 percent from the floor for the second time in his last three outings. Smart also shot 50 percent from downtown. The shot volume continues to be there for him and we can trust that he’ll find his way to the basket a bit more frequently tonight.

After seeing Robert Williams receive 30 minutes again, we can put confidence in him that he’s able to run the floor better and Williams will have to try to shake Draymond Green at times and give the Celtics offense on transition. The Celtics will need to complete a few lobs tonight and that will involve Williams cutting to the basket. He’s pulled down eight or more boards in each of his last three games and he’s blocked multiple shots in four of five games in this series. Williams has been a key defender for Boston and he continues to halt the Warriors' drives by breaking up possessions on transition. Williams has posted steals in three games in this series as well. He’s not known for his offense and every little bit helps because Boston doesn’t have much skill on offense in the post. Williams hit double figures in scoring for the first time this series last games and we should see him put up three to six shots tonight. Even though he’s still tagged as questionable on the injury report, we should expect him to play 30-plus minutes in this elimination game.

Derrick White’s shooting has cooled off and he hasn’t been able to fire back up after having a strong first game of this series. He hit rock-bottom last game, missing all four of his shots. White has bailed out the Celtics with his three-point shooting but has thrown up two zeros in his last three games, but with the season at stake and White having quickness and the ability to bring up the ball, we should see him play close to 25 minutes tonight. He also earns his keep in the Celtics rotation by playing tremendous defense in which he’s frequently in the face of the opposition. He’s produced steals in each of his last four games. He dropped three dimes in game five and that was the second time he’s done that in the finals. White has scored 12 or more points in three of five games against the Warriors and Boston will need their bench to help them through this game unless the starters are firing on all cylinders.

After seeing Gary Payton II play 26 minutes and steal the ball three times, let’s put our trust in him heading into tonight. Like White, he plays aggressive defense on the perimeter and not only has stolen the ball in three straight outings, but he has also grabbed four or more boards in both of his last two contests. Payton hit six of his eight shots as well scoring 15 points to help the Warriors. We may not see Payton take as many shots if Curry’s shot is a bit more on tonight, but he’s earned 20 minutes in the Warriors rotation for his hustle and blue-collar style of play. The Warriors have enough offensive weapons and they will need their better defenders to contain Boston who should be in full attack mode tonight. Payton has been good at anticipating screens and working through them and he doesn’t lose his assignment and is always tracking his defender. When he gets screened out, he doesn’t give up on the play and will jump in and try to disrupt the shooter inside the arc.