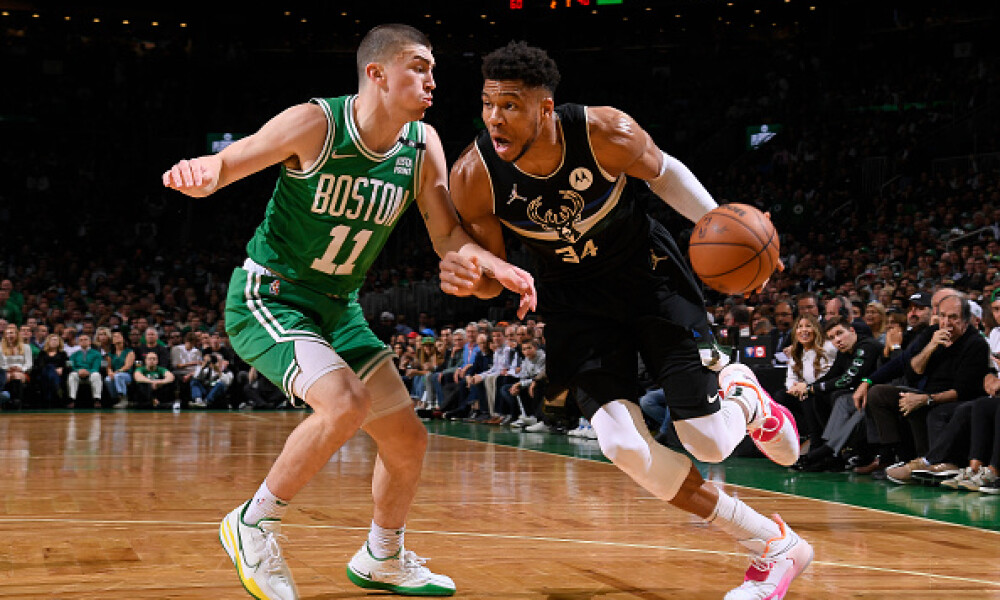 We have two ultra-competitive series to choose from today for NBA DFS. Before you set those NBA daily fantasy lineups, the big question is not with Questionable players like we had on Friday, but how will two key players missing in the Memphis-Golden State series affect their rotations? As we create our DFS lineups on FanDuel (FD), DraftKings (DK), and Yahoo, we will have to make educated guesses about which value plays might fill the minutes for Dillon Brooks (suspended) and Gary Payton II (injured). Here are tonight’s DFS NBA core plays.

After a surprising blowout at the hand of the Bucks on their home court in Game 1, the Celtics roared right back to even the score. Boston beat the Bucks by 23 points to even the series, getting massive games from Jayson Tatum and Jaylen Brown and a surprising 22 points from Grant Williams off the bench. With the series headed to Milwaukee and still no Khris Middleton, the Bucks will have to rely on the superhuman version of Giannis once again to make sure they keep the homecourt advantage they stole from Boston.

Jayson Tatum absolutely torched the Bucks on Wednesday for 53 fantasy points in under 43 minutes, which propelled his team to a much-needed series tie. The only question now is not will he do it again, but is he worth the $10K salary tag on both DK and FD? Tatum is averaging five more fantasy points in the playoffs that in he did in the regular season, and the Celtics won't hesitate to play him 43+ minutes if this road game is close. He is the unquestioned best true small forward on the slate.

The best shooting guard on this slate really comes down to what you can do with salary. On DK, Jaylen Brown and Klay Thompson are only $900 apart while they are an incredible $2,600 apart on FD. I much prefer Brown on DK tonight, especially after he also had an amazing game against the Bucks, going off for 54.5 fantasy points. Khris Middleton still being out provides a big boost to both Brown and Tatum.

Value plays on a two-game slate are often rare, which is why Grant Williams might be one of the best plays of the day. After his 35-minute, 22-point performance on Wednesday, it's clear the Celtics trust him in crunch time and he is getting minutes over Robert Williams. Grant Williams hasn't played under 28 minutes since the first game of the Brooklyn series so his salary in the low-$4,000s on both DK and FD seems too low for his current role.

What more can be said about “The Greek Freak” at this point? Giannis Antetokounmpo is averaging 54.2 fantasy points per game in his last five contests and hasn't played more than 37 minutes in any of them. In a pivotal Game 3, imagine what he might do if this was a close matchup and they needed him for 40 minutes? Just bite the bullet and pay the salaries over $11K and watch the fantasy points pour in.

Jrue Holiday might not be in line for the most raw points at the point guard position, but the $1,000-$2,000 salary discount you get from Ja Morant and Steph Curry certainly makes it an interesting discussion. Marcus Smart is back tonight, which might dampen the projections for Holiday somewhat. Although in Game 1, Holiday did go off for 50 fantasy points when Smart played 33 minutes. On the season when Khris Middleton was not on the court, Jrue Holiday's usage rate and fantasy points per game both went up by five points.

With Khris Middleton sidelined, it's clear there are only three reliable Bucks we can play. Players like Grayson Allen, Wesley Matthews, and Brook Lopez have been very up and down, but Bobby Portis has back-to-back double-doubles and is playing over 32 minutes per night. His salary in the $6,000 range also offers much needed relief on this short slate.

Through the first two games of all four conference semifinal playoff series, Ja Morant is your real-life and fantasy MVP. He averages 72 fantasy points per game in the first two home games and that's after scoring 50+ in four of six games against Minnesota. Morant is simply a one man wrecking crew out there as he averages 8.5 rebounds, 9.0 assists, and three steals in this series as well. If the Grizzlies want to pull out a game in Golden State, Morant is going to have to be at his best. And that makes him worth the $10K+ salary tags on both sites today.

Desmond Bane checks in as one of the primary beneficiaries this year when Dillon Brooks is off the court. He sees an uptick in both points per game and usage rate. The only problem is he has been a tremendous letdown with 12 and 15 fantasy points in the first two games of this series. Klay Thompson has really been locking him down, but we now get a discount at $6,400 on DK and just $5,800 on FD. It's unlikely Morant takes 31 shots for a third straight game especially if the Warriors lock in on him at home. Look for Bane to be more involved and play slightly more minutes with Brooks out.

I personally consider the last game for Brandon Clarke to be just a bad blip on an otherwise stellar playoff resume this season. He only played 27 minutes and put up 17.5 fantasy points. But that came after five games with at least 29 minutes played and an average of 36.7 fantasy points. I think he will be back over 30 minutes again tonight if this game stays close.

51 fantasy points in Game 2 while only shooting 3-for-11 from three? Wow.  Stephen Curry was everywhere in his 39 minutes, pulling down nine rebounds and dishing out eight assists to go with his 27 points. We have only seen Curry go crazy with three-pointers once in this playoff run, but with some home cooking the next couple games, this could be vintage Steph-on-fire happening. Just shy of 40 minutes in his last games, the minutes restriction for Curry is completely gone at this point.

The Grizzlies have really held Klay Thompson in check the first two games of this series as he shot 26% and 32% from the floor so far. Much of that credit goes to Desmond Bane and his defense, but Dillon Brooks also had a hand in the first game, and he will be out tonight. Klay has always shot better at home anyway (47% career at home, 44% on the road), so I fully expect him to get back on track. As mentioned above, the $6,200 salary on FD just seems too low tonight.

Jordan Poole likely reenters the starting rotation with Gary Payton injured and out multiple weeks, Although Steve Kerr could pull a fast one and start Kevon Looney and have Poole play 35+ minutes off the bench. I tend to prefer Poole when he is playing a rotation opposite Steph Curry, but it hasn't mattered in this series with Poole checking in with a 30-fantasy point and 59-fantasy point game. If forced to choose, I go with Klay Thompson on FanDuel because of the salary, but I might end up Poole on DK at just $100 more.