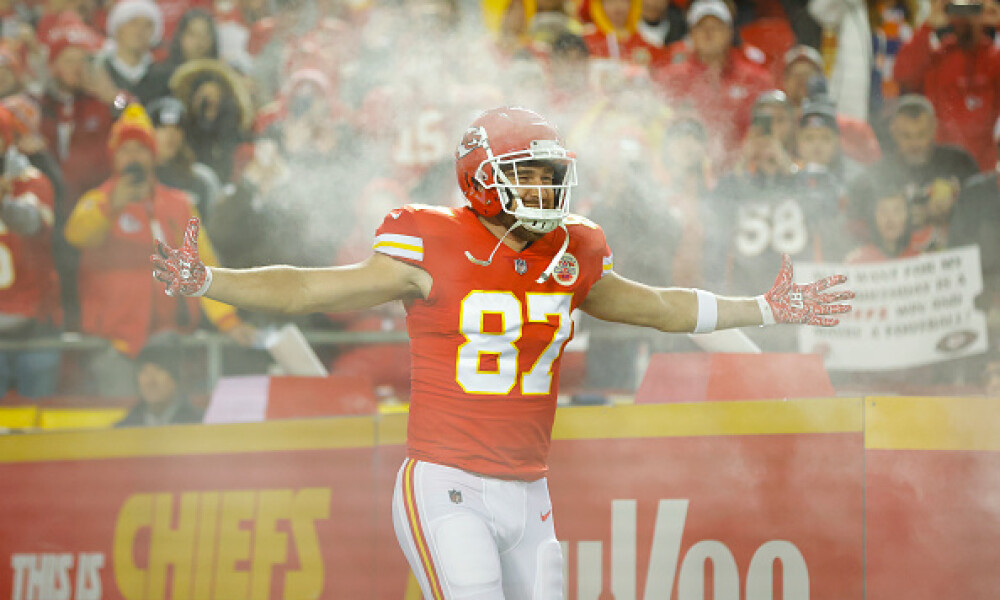 Another slam dunk week in week 13.  We nailed the top two overall TEs in George Kittle and Dallas Goedert. We hooked it up with TE5 in Logan Thomas (who would have had a bigger day if it wasn’t for a cheap shot).  And we helped fade popular plays like Cole Kmet and Jack Doyle.  Not too shabby.  But it’s on to week 14. If your fantasy team is eliminated, lets dry those eyes with $100 bills from DFS!

Travis Kelce -  Sometimes I feel like these sites don’t get it.  They price Travis Kelce as the highest player each week and think that’s enough but they it’s not relative to the situation.  This week Kelce is his normal $7,400 but he’s playing against the Raiders who are the second worst team in the league vs. the tight end in a situation where Patrick Mahomes and the Chiefs need to prove they are still a front runner.  In the elite tier, there is no safer way to spend your money this week.  Yahoo has him priced at 16% of your budget so they’ve figured it out but on DraftKings he’s only 14.8%.

Mark Andrews - We are going to skip George Kittle at $6,900 and Rob Gronkowski doesn’t necessarily appeal vs. Matt Milano and the Bills at his price tag.  Mark Andrews though has been absolutely rock solid yet he’s just under $6,000 on DK making him the most affordable option in the elite tier and we have him ranked as our TE2 on the week for redraft in general.  On Yahoo they make it harder for us as all of Kittle, Gronk, and Andrews are priced at $23 so DraftKings is the place to build your Andrews teams this week and maybe make a Kittle one on Yahoo.

Dawson Knox - This is a typically a popular player and not one we normally like but this is a fair different situation than the freezing slop fest against New England last week.  NE is a top five team vs. the TE and hasn’t let up a 100 yard game to the position since 2018 while the Bucs are a bottom eight team vs. the position in a game that has the highest over/under of the week at 53.5 points.  Knox still got six targets in the slowed down matchup in the snow and wind so expect at least that this week at a fairly reasonable price.  He’s 10% of your budget on DK and 9.5% on Yahoo so you get a slight discount on the Y! app.

Evan Engram - This is kind of a Jon Impemba “Contrarian Corner” type play but here me out here.  Engram has a been a fairly consistent part of the offense, leading all tight ends and wide receivers in snaps two weeks in a row now.  This is a perfect matchup for him vs. the Chargers who are a bottom five team vs. the position. Folks will be scared off because Jake Fromm is the quarterback but the knocks on Fromm are arm strength and mobility.  That oddly sounds like a GOOD thing for Evan Engram.  He’s only $3,500 on DK which is 7% of your budget (he’s 7.5% on Yahoo so a better DK play).

Austin Hooper- There are a LOT of options in this tier because of the weird circumstances going on with injuries of COVID.  Pricing comes out too early to change it so that creates value.  What has been killing Austin Hooper this year is splitting snaps with the likes of David Njoku and Harrison Bryant.  Well, both of those players are OUT this week with COVID which puts Hooper in the captain’s chair for a nice matchup vs. the third worst team vs. the tight end. He’s 6.8% of your budget on DK but only 6% on Yahoo and you really aren’t going to get much better value deals.  That’s $12 on Yahoo when the bare minimum price is $10.

Jared Cook - If Hooper is the Yahoo play then Jared Cook is the DraftKings value play.  He’s $3,200 (6.4%) on DK which is actually cheaper than Hooper while he’s $14 on Yahoo (7%) which is more expensive than Hooper over there.  Here’s the thing folks might not realize about Jared Cook.  He rotates with other tight ends but he really plays more WR than TE - 301 snaps at WR with only 162 in-line.  Donald Parham has 300 snaps in-line with less than 75 out wide.  So Cook is like the Mike Gesicki here and Parham is the Durham Smythe.  So when Keenan Allen and/or Mike Williams are out, that means it’s wheels up for Jared Cook. The value tier this week is where it’s at.

Kenny Yeboah - This is a DEEP one.  This is like take-a-sip-of-beer-and-say-“watch this”-eyes-shut-dart-throw status.  But here me out.  The split end Corey Davis is out - surgery on a core muscle injury. Guys like Elijah Moore, Jamison Crowder, Denzel Mims etc. aren’t really equipt to play split end.  So when Davis went down, they ran some two tight end sets with the clunky Ryan Griffin and rookie Kenny Yeboah (who was a D2 super star that is basically a WR).  Yeboah came in and ran routes on 11 of 14 plays.  The Jets are in “live tryout” mode so why not see what the kid can do.  Don’t put any money on this one you can’t afford to lose but he’s literally the bare minimum price on both platforms so any action at all means value.  Plus, if he scores a touchdown, we can be annoying while we victory lap on Twitter. That’s half the fun.

T.J. Hockenson - Nothing about this makes me feel comfortable.  This team stinks.  The Broncos and Justin Simmons are arguably the worst matchup for tight ends.  As of the writing of this, Hockenson hasn’t practiced one time all week with a hand injury.  There’s almost no reason to start Hockenson this week.  That’s pretty much it.

Donald Parham Jr. - There are a lot of funny analysts on Twitter that like to say funny things about Donal Parham and that makes us like them and it makes us like Parham.  But I just explained above why Parham is Durham Smythe.  People are going to be desperately looking for that sneaky Chargers play when you don’t need to be sneaky - we have the info already.  So just don’t do it. Next year when Jared Cook leaves it will be Parham time.