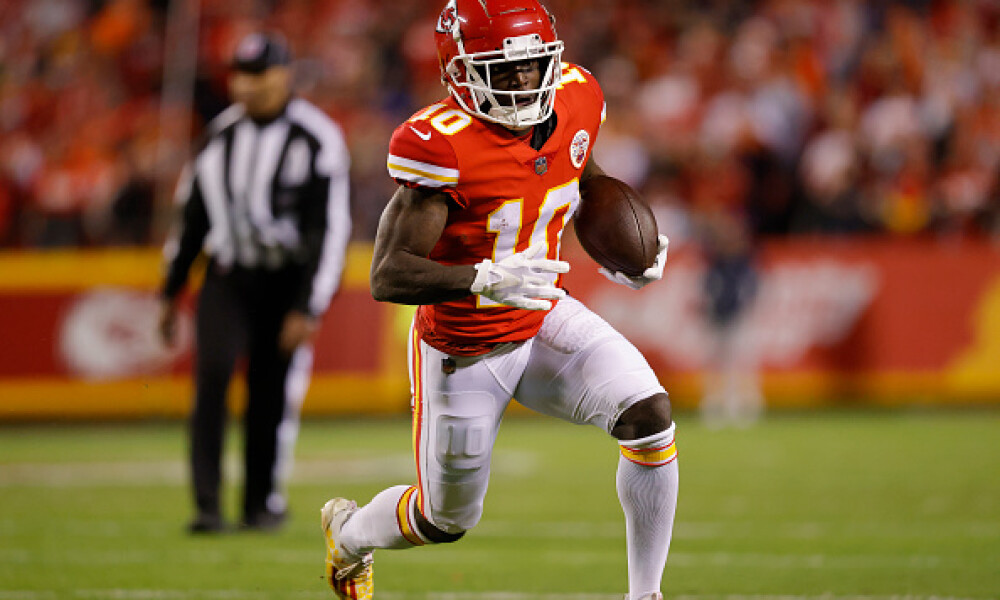 Tyreek Hill, KC - He torched the Raiders for 83 yards and two touchdowns earlier this season and he’s burned them of late. In his last three games against the Raiders, Hill has 21 receptions on 30 targets for 263 yards and three touchdowns. In other words, over his last three games, he’s averaging seven receptions for 87 yards (rounded down) and one touchdown per game, which goes for 21.7 points in a PPR and 18.2 points in a 0.5PPR setup. He’s expensive, but worth it.

Stefon Diggs, BUF - There are going to be some points scored in this one, that’s for sure. Buffalo shouldn’t even attempt to run the ball. Give it up. It doesn’t work. Let Josh Allen air it out, who actually has been better on the road in 2021. With that in mind, it should come as no surprise that Diggs has also been better on the road in 2021, averaging 30 more receiving yards per game on the road (89.9 ypg) than at home (59.8)

Chris Godwin & Mike Evans, TB - Both receivers find themselves in great spots here. Godwin is a target machine and Evans is a big-bodied receiver that can manhandle the opposition in the end zone. Buffalo has been tough on tight ends this year (second-fewest fantasy points per game in 2021 and over last four weeks), so I would expect Brady to look to attack the corners. No Tre’Davious White is good for all Tampa Bay receivers, but in terms of matchups, Chris Godwin has a tougher matchup (Taron Johnson, 82.9 coverage grade per PFF), compared to Mike Evans (Dane Jackson, 51.7 coverage grade per PFF). However, both are firmly in play this week, as Tom Brady has been far better at home than on the road (20:3 TD/INT at home versus 14:7 TD/INT ratio on the road).

Ja’Marr Chase, CIN - Over the team’s last three games, Higgins has been the WR1, as Chase has just 11 grabs for 123 yards and one touchdown during that stretch. He dropped a would-be touchdown last week, that actually went for an interception, and if he would have caught that ball, everyone would have been back on the Ja’Marr Chase train for this matchup against the 49ers. Higgings is more than a fine play, too, but with San Fran allowing the fifth-most fantasy points per game to receivers over the last four weeks, I’m all in on Chase in GPPs this week. Yes, you can play Higgins (or Chase) in cash, but in GPPs, I want Chase all the way, especially since his price tag is nearing closer to just $7,000, and Chase is only $400 more expensive than Higgins on FanDuel.

Tyler Lockett, SEA - Houston ranks sixth in DVOA against the pass, but don’t worry, you can attack their secondary. Their run defense is so bad that they get exploited there, but Seattle’s lack of rushing attack could actually, possibly, potentially lead to the rebirth of the “Let Russ Cook” movement. Houston is ranked 5th in DVOA against the opposition’s top wideout, but just 27th against the No. 2 wide receiver. From Week 10 on, Lockett has the eighth most receiving yards amongst wideouts and a healthy 17.9 air yards per target.

DJ Moore, CAR - Trusting Cam Newton isn’t the easiest thing to do, but the Atlanta defense has been handing out fantasy points to wide receivers left and right. They have allowed the third-most fantasy points per game to wide receivers over the last four weeks, not to mention the most receptions, and second-most receiving yards. Atlanta ranks 29th in DVOA against the pass and 28th against the opposition’s WR1. I love Moore this week.

Mike Williams, LAC - This play only gets juicier as more information comes out regarding Keenan Allen and his length of stay on the reserve/COVID-19 list. The Giants have allowed the 10th-most fantasy points per game to wide receivers this season and a Justin Herbert-led attack is a threat to put up 30 points every week. Williams has an 18 percent target share over the team’s last four games, and that figures to increase if Allen is out or limited in any fashion. UPDATE: Williams is in. Allen is out. It’s going to be a big Mike Williams day!

Hunter Renfrow, LV - Only five receivers have more yards than Renfrow over the last four weeks. How crazy is that? During this impressive run, Renfrow has caught 28 of 32 targets for 312 yards and one touchdown, while occupying a healthy 24 percent target share. The Chiefs’ defense has been better of late, but they are not a shutdown unit by any means. In a PPR setup, Renfrow has double-digit points in five of his last six contests, including at least 17 points in four of his last five. Earlier this year, he went for 46 yards and a touchdown on seven receptions against this Chiefs defense.

Amari Cooper, DAL - The savings with Cooper compared to CeeDee Lamb are quite intriguing this week if you want a piece of the Dallas offense but don’t have the necessary funds. After missing time with COVID-19, Cooper was limited to just 34 percent of the snaps in Week 13, but he’s had a few extra days to get back to full health (or close to it). It’s a great matchup, as Washington has bled fantasy points to opposing receivers and ranks 30th in DVOA against the pass, but we’ll have to monitor any reports that surface about Cooper and his conditioning prior to this Week 14 tilt.

Jarvis Landry, CLE - Baltimore has allowed the second-most yards to wideouts over the last four weeks and the team ranks 27th in DVOA against the pass. Marlon Humphrey is out for the rest of the season and the Baltimore secondary is beat up. Just a couple of weeks ago, Landry went for 111 yards against this team on 10 targets. Why can’t he do it again?

Tre’Quan Smith, NO - Just average quarterback play should be just fine for Smith this week. He’s incredibly affordable, and finds himself in a great matchup. The Jets have allowed the 11th-most fantasy points per game to wideouts over the last four weeks, and the Jets rank 32nd in DVOA against the pass. In the team’s last five games, only two wideouts have at least 30 targets. One of them is Smith and the other will be out this weekend (Deonte Harris). Smith also leads the team in air yards over the team’s last four games.

Jalen Guyton, LAC - In GPPs, and maybe even in cash since Keenan Allen is out, take a look at Guyton. Over the last four weeks, he leads the Chargers’ receivers in air yards per target (10.5) and has averaged 18.7 yards per reception in that span. The Giants rank 24th in DVOA against the opposition’s No. 2 wide receiver, and just one big play from Guyton could provide immense ROI.

Brandin Cooks, HOU - Davis Mills under center is actually a bit more encouraging for Cooks, given that in the few starts we’ve seen with Mills, he locks in on his first read, which is more than not Cooks. Seattle is ranked 7th in DVOA against the opposition’s No. 1 wide receiver, but they are 23rd against the No. 2 option. Cooks is just too expensive for his recent production and his upside is capped in a conservative Houston offense.