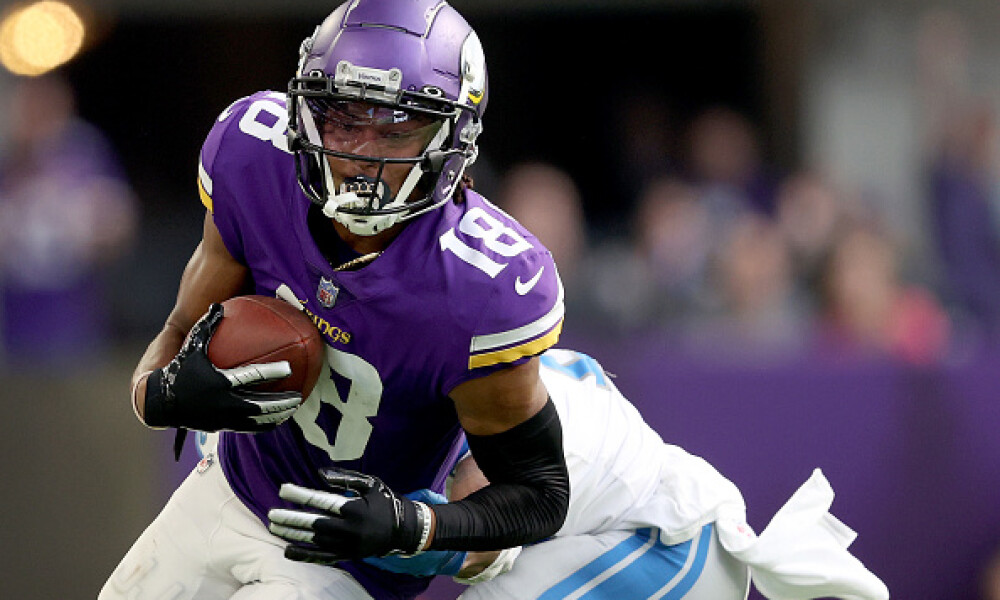 Keenan Allen, LAC - I think Mike Williams is firmly in play as well, as there’s fantasy goodness to be had against this Cincinnati defense. This game has the makings of a high-scoring affair and smooth route runners have given Cincy fits of late, as have slot receivers. In the past four weeks, Diontae Johnson and Jamison Crowder have done some damage against the Bengals, as they rank 19th in DVOA against the pass.

Justin Jefferson, MIN - Jefferson is good at football. The Lions are not. Need more than that? Okay, well the Lions rank 28th in DVOA against the pass, 24th against the opposition’s WR1, and Jefferson burned the Lions for 124 yards earlier this year. Furthermore, his last two games against the Lions have gone for 124 and 133 yards. Pay up for Jefferson.

Brandon Aiyuk, SF - The Seahawks rank 27th in DVOA against the pass and Aiyuk will step up into a prominent role in the passing attack with Deebo Samuel banged up. Even when Samuel was healthy, Aiyuk led the 49ers with a 25 percent target share over the team’s last four games. He’ll likely have decently high ownership in cash games, but it’s deserved as he has a touchdown or 80 receiving yards in three of his last four.

DeVonta Smith, PHI - Yes, the Philadelphia Eagles are run-heavy now. However, Smith is as talented as they come, and the New York Jets have allowed the second most fantasy points per game to wide receivers over the last four weeks. The Jets rank 31st in DVOA against the pass and 20th against opposing WR1s. Is it crazy to say that I actually like Smith MORE with Gardner Minshew under center?

Van Jefferson Jr., LAR - The Jaguars don’t scare me and they shouldn’t scare you. They rank dead last in DVOA against the pass and the Los Angeles Rams need a get-right game as they have cooled off in recent weeks. Odell Beckham Jr. is banged up, so if the team wants to rest him in a winnable game - or perhaps back off his workload - Jefferson stands to gain the most fantasy value. If you want to stack the Rams but perhaps move off Cooper Kupp due to ownership concerns, Jefferson is your guy.

Hunter Renfrow, LV - If the only Washington game you watched this season was this past week’s game against the Seahawks, you might be slightly afraid to play any Raider, notably Hunter Renfrow. However, the Football Team has allowed the fourth-most fantasy points per game to opposing receivers and rank 30th in DVOA against the pass. Renfrow has at least eight targets and double-digit fantasy points (PPR) in four of his last five contests.

Michael Pittman Jr., IND - Pittman only had two grabs for 35 yards against Houston back in Week 6, but that’s not scaring me off of him this week. Since that game against the Texans, Pittman has at least five targets in all but two games - and over his last six contests he’s averaging 67 yards per game. Jonathan Taylor might have 400 percent ownership, but sneaking Pittman in is a winning move.

Tyler Lockett, SEA - The Seattle offense has been a trainwreck of late but in a GPP this week, why not go Lockett? He was the only receiver that had any sort of connection and rhythm with Russell Wilson on Monday night against Washington. The 49ers have allowed the sixth-most receiving yards to wideouts over the last four weeks, and in his last four games Lockett has 96 or more yards in three of the four contests.

Josh Reynolds, DET - Reynolds might be the chalkiest of the value receivers on the slate, but there’s upside to be had here. Over the last two weeks, he has a 17 percent target share, despite being there for all of a handful of weeks now, and he gets a juicy matchup against a Minnesota defense that has allowed the most receiving yards and most fantasy points per game to opposing receivers.

Russell Gage, ATL - Do I feel good about this? No, I don’t because the “trusting Matt Ryan business” isn’t one I like to invest in. However, Gage is getting the targets by posting a 23 percent target share over the last four weeks and a 27 percent mark over the last two games. If you’re going to stack the Tampa Bay offense, bring it back with Gage on DraftKings - who has 111 yards and one score over his last two games.

Brandin Cooks, HOU - Cooks had 13 targets last time against Indy, going for 89 yards on nine grabs - but I’m not going there this week. He has just eight targets over the last two weeks and if it weren’t for that long touchdown last week, he was non-existent. The team isn’t prioritizing him in the passing attack and Tim Kelly’s play-calling has been atrocious of late. If you’re stacking the Colts and want to bring back a piece of the Houston offense, sure, go Cooks if you want - but I don’t like his price tag and wouldn’t invest a lot into Cooks.