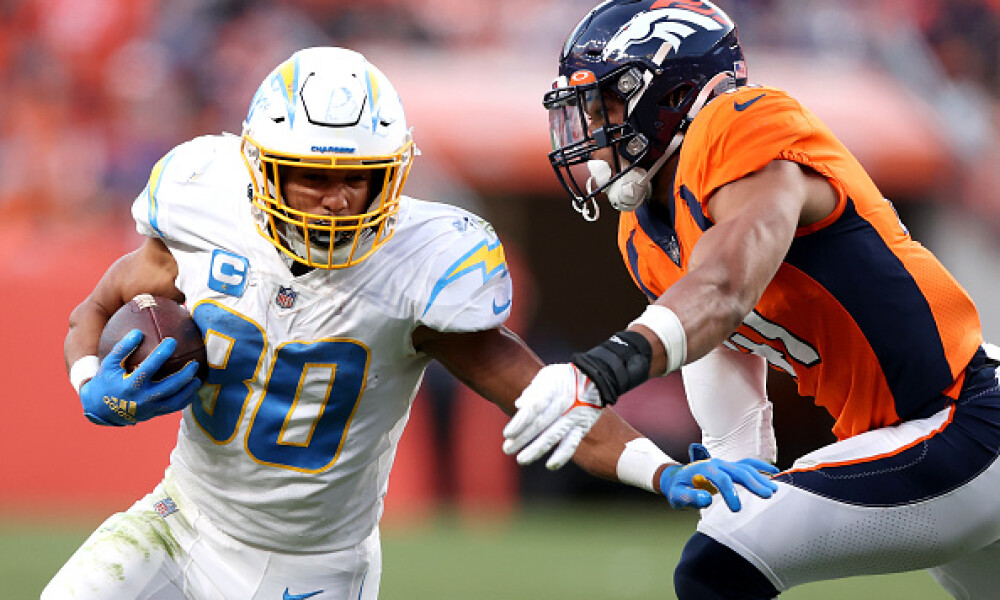 Jonathan Taylor, IND – He is the best running back in football right now and he is taking on the Texans. He has scored at least 19 points in eight straight games and just had no issues with two of the top run defenses in the league. How much more do I need to say? He is very expensive, but if you can make the price work, you want to play him.

Austin Ekeler, LAC – Ekeler averages the second most points per game on the slate at the position (only behind Taylor) but he comes at a considerably cheaper cost. He has at least six targets in five of his past six games and at least 11 carries in five straight. He has seven games this season with at least 21.9 points scored. This matchup with the Bengals ranks slightly better than average, but what I like is that I anticipate this game to have a good bit of scoring in it and could turn into a bit of a shootout, which would be great for Ekeler. You can consider Mixon on the flip side of things, but I would lean Ekeler over him at nearly the same price.

Alexander Mattison, MIN – Mattison will be filling in for Cook this week and what we know from the past is that when Mattison fills in, he can be trusted as the lead back fully, hence the unsurprising high cost on him this week. It doesn’t get much better than a matchup with the Lions either, so we can expect Mattison to have his way with them and produce at a high level. In fact, he started against the Lions earlier this year and racked up 25 carries for 113 yards and caught seven passes for 40 yards and a touchdown to finish with 30.3 points. In his only other start this year he rushed 26 times for 112 yards and caught six of eight targets for 59 yards to finish with 26.1 points.

Leonard Fournette, TB – We all know the monster game Fournette had in Week 12 as he found the end zone FOUR times, rushed for 100 yards, and caught seven passes to finish with an insane 47.1 points. While we obviously aren’t expecting a repeat performance of that, I really don’t view this as chasing points. Fournette has been great this year and is averaging over 18 points per game and now he gets a fantastic matchup with the Falcons and their poor defense. I think we can expect another strong game from Fournette this week.

Antonio Gibson, WAS – Gibson is coming off his best game of the season as he rushed 29 times for 111 yards and caught seven passes for 35 yards to finish with 26.6 points on DK. It was his second 20+ point game in the past three weeks, something he had done only one time prior to Week 10. His seven receptions and seven targets were both by far season highs and he has at least 19 carries in each of the past three games with 72 carries total in that span; in other words, he is getting bell cow usage finally. This matchup with the Raiders is a great one and you can expect another strong game out of Gibson and at a mid-tier price.

Jamaal Williams, DET – Williams will fill in for Swift this week and at his price tag I like him. He scored 13.3 points in relief of Swift on Thanksgiving while racking up 20 touches (15 carries for 65 yards and five receptions for 18 yards). I love the usage and I love the work in the passing game, which we know is a huge part of the Lions game plan with check-down Goff. He should have a pretty decent floor with receptions alone and if he finds the end zone he could really pay of this cheap price tag in a big way. It also doesn’t hurt that we just saw Mitchell torch this defense last week.

Tevin Coleman, NYJ – Coleman is the lead back for the Jets and there really isn’t a question surrounding that after last week’s game. He rushed 16 times for 67 yards and caught two passes for another three yards. He didn’t have a big fantasy day, but the fact that he had 18 touches is what matters the most. This matchup with the Eagles is also a good one, so there is a good bit to like here at this near minimum price tag. His ceiling is probably a bit capped by the fact that he’s not that talented and the Jets offense sucks, but he should be able to hit value if looking to save money at the running back position.

Josh Jacobs, LV – Jacobs is coming off his best game of the season and yet I don’t like him this week. Something that really caught my eye on Thanksgiving is after Jacobs had a really bad drop, he found himself on the bench for a long time. I wouldn’t be surprised if he is completely back to out of the passing game with Drake moving back into the passing down role this week. Add to that that this matchup with Washington is not a strong one and I don’t really see a formula for success in Week 13 for Jacobs. His price tag is pretty expensive too, especially for a guy that hasn’t had a single 20 point game all season.