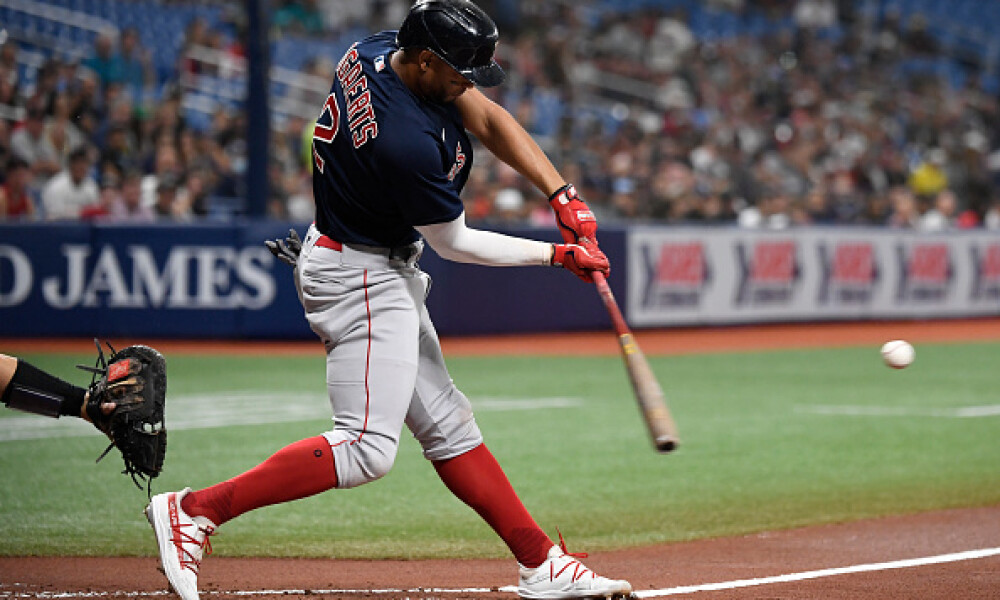 It’s a ten-game slate on this Sunday afternoon to wrap up the week and for the most part the weather doesn’t seem like it will be playing much of a role, other than a few late-arriving scattered showers. It does appear though, that the temps will be in the mid-to-upper-80s around the league with wind blowing out at several stadiums which is usually a bump to the offense.

Vladimir Guerrero Jr., 1B TOR - Do we really need stats here? Guerrero has been the AL MVP all season and hasn’t slowed down. Guerrero is 7-for-12 with a homer and three RBI off of Garrett Richards in prior meetings and let’s not kid ourselves about RIchards being anything more than a batting practice arm at this point. Vladito is very expensive but there is a good reason for it.

Xander Bogaerts, SS BOS - Bogaerts has been hitting lefty pitchers at a .374 wOBA clip this year and has taken Hyun-Jin Ryu deep before while hitting .300 off of him. This could very well be the highest scoring game on the slate today and so getting some exposure to either side would be a good idea and with Bogaerts hitting well in this match-up he’s a good Boston bat to focus on.

Jorge Polanco, 2B MIN - Polanco hasn’t previously seen Lance McCullers but in match-ups against right-handed pitchers, Polanco has a .352 wOBA and 13 homers. For his part, McCullers is allowing a .311 wOBA to LHHs, which Polanco benefits from due to him being a switch-hitter. People may dismiss the Twins because of their record and McCullers being a good pitcher, but Polanco is the guy we want from this game.

Bryan Reynolds, OF PIT - Reynolds has been the best bat for the Pirates all year and against RHPs, he’s been even better. He’s hitting .293 with 15 homers and Tyler Mahle is allowing a .371 wOBA to right-handed hitters. The game is in Cincy and Reynolds has hit .340 on the road with a .981 OPS. Let’s take advantage of a misprice here.

Jorge Soler, OF ATL - Soler moving to Atlanta has been a boost to him and the Braves offense with him hitting near .300 with three homers already for them. Against LHPs, Soler has hit seven homers this year and Patrick Corbin has been very hittable all year. The lefty has been one of the worst starters in baseball and that should have Soler licking his lips today.

Myles Straw, OF CLE - Straw has been a great addition to the Cleveland lineup and is hitting nearly .300 since heading to the Indians. He’s also stolen a few bags, which shouldn’t be surprising, and as a leadoff hitter his value goes up too. Wily Peralta has been hit hard by righties as well allowing a .337 wOBA to RHHs.

Yadiel Hernandez, OF WAS - Hernandez has been very good against southpaws on the mound this year as a reverse splits lefty. He should be in the middle of the order if he’s playing and if so, there’s a fair amount of value here. Over the last ten games he’s played, Hernandez is hitting .429, two homers, seven RBI, and seven runs.